11. The Leena’s B&B Sequence. This entire sequence is just perfection. I love everyone’s reactions to being caught in the house, particularly Pete’s repeated attempts to break free. That one shot where he dives out of one window only to appear simultaneously diving into the room via the adjacent window is a thing of beauty. Even more importantly, though, this is the first time that we really see Pete, Myka, and Claudia really bonding as a team and a family. It’s not that there was no contact between them beforehand, but this is the first time they (sort of) go on a mission together, and over its course, start thinking of Claudia less as the kid who works with Artie but someone who knows the Warehouse very well and is a valued, equal teammate. 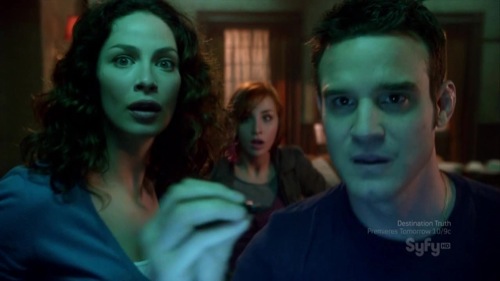 12. Thunderstorm inside the Warehouse. ‘Nuff said.

13. The Dark Vault. There is basically nothing about the Dark Vault that isn’t awesome, with its ultra-dangerous artifacts surrounded by purple containment fields. Viewers with eyes keen to detail will even notice the Aztec Bloodstone mask from the “Pilot” sitting there even before Pete does, which really underlines just how dangerous that first artifact really was. And it’s hard to not love the concept of Sylvia Plath’s typewriter having the ability to drain someone of the will to live.

14. “Myka, I spent some serious time in the Bell Jar. I know who Sylvia Plath is.”–Claudia

15. Myka karate-chopping the keypad into oblivion. What I love most about this moment is what follows even later in the episode–after Myka tells Claudia that she was once where she was, emotionally, Claudia asking Myka to teach her some of those moves (a thread referenced later) and Myka asking her to teach her how to hack the Grid. Awww.

16. Mrs. Frederic telling Artie that he is the best agent the Warehouse has ever had. And managing to do it in her throughly Mrs. Frederic, matter-of-fact, non-sentimental manner, to boot. 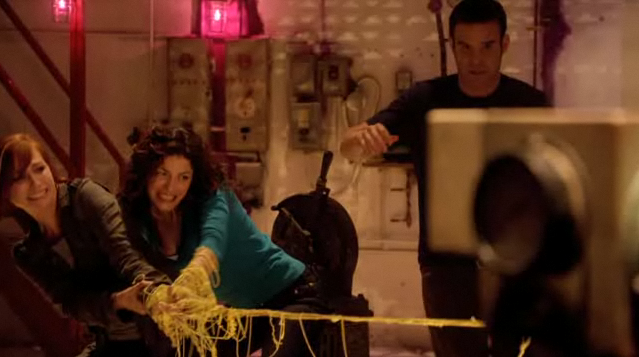 19. Pete, Myka, and Claudia talking at the same time, to try to explain what happened while Artie was gone, followed by:

Artie: How long did you have until the Warehouse was going to explode?

Pete: Under a minute.

Artie: That’s lucky. I once got there with 17. And her voice gets really annoying when she’s counting down seconds one at a time.