Hello, everybody and welcome to the Farnsworth Society, where we, as a group, re-watch television shows that are dreampunk, steampunk, cyberpunk, anypunk-related and meet weekly to discuss each episode one at a time. Our first show is the steampunkalicious Warehouse 13 (it only seems fitting to begin the Farnsworth Society with this show, doesn’t it?). Today, we’re covering the ninth episode, “Regrets”. And please fill up the comments with your own thoughts, remembrances, favorite things about the episode, absolutely anything. And, yes, spoilers for any other aired episodes from Seasons 1-3 are allowed. We considered making it spoiler-free, but then decided it would likely constrain conversation far too much. Let’s get to it, kids!

Regrets is another one of those first season episodes of Warehouse 13 that is not a personal favorite of mine (I don’t tend to be a big fan of prison-set episodes of sci-fi series) but which actually has quite a lot of really cool stuff going for it. I absolutely love the conceit of this week’s main artifact and how to neutralize its effects. This episode features basically the first (perhaps the only) reverse artifact, so to speak, in that the trouble–namely that the residents of a prison are being haunted by the ghosts of the regrets of their past, with deadly consequences–is actually being caused by the building itself, which having been built on the site of an old mine, is full of mineral deposits that are acting as a sort of tuning fork for all the crackling psychic energy in the air. As it turns out, Pete and Myka don’t actually have to find an item to remove, as per usual, but rather an item to return to its original spot which will restore the natural balance of things and keep the spirits in check. 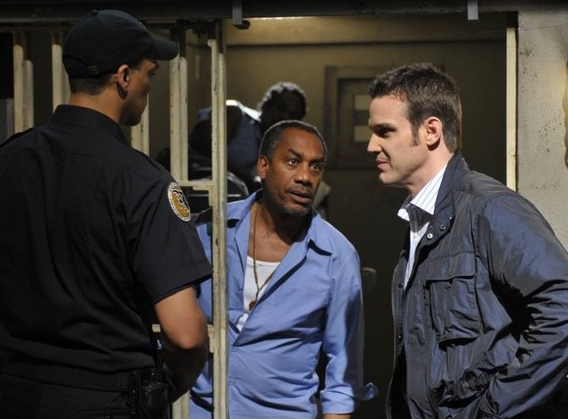 As it just so happens, this item is a cross that used to hang in the previous, ultra-religious warden’s office newer warden had had removed after his death.  And yet, even with that, Warehouse 13 takes what could have come across as a Christian metaphor and subverts it, for although this cross does indeed save the day, it is primarily due to what it is made of, not what it represents. The show reiterates this by immediately afterwards subverting the cinematic cliche of the religious man who is shot but saved when a Bible blocks the bullet that would have otherwise entered his heart: here, the cult leader indeed does have a Bible in his upper left pocket, but the bullet cuts right through it and into his chest.

That isn’t to say that the show is disrespectful of anyone’s religious beliefs–and I guess you could believe it was actually the power of the cross itself if you wanted to–but that it isn’t preachy and isn’t trying to push any particular agenda. I actually can’t think of another fantasy show that’s featured an episode with such prominent Christian iconography but which never argues for or against the possibility of some sort of divine presence. Instead, the episode’s main plot uses a religious framework more to address the episode’s central theme of regrets, due to the fact that when many people are plagued by regrets for past actions, they find solace in prayer. The seemingly serene cult leader beautifully played by Eureka‘s Joe Morton is actually a red herring in many ways. His religion (which he is trying to instill in other prisoners) is neither the cause of the disturbances at the prison nor the solution to them. Instead, his attempts to make his own sense of the world in the wake of his own actions simply reflect the other characters’ coping with their past perceived misdeeds. Interestingly and significantly, we also never do learn whether or not he regrets murdering his wife, so it’s up to each viewer to decide whether he’s an opportunistic sociopath, preying on the weak-minded, or whether he’s actually changed. He does certainly attempt to come to the new warden’s aid, though, and doesn’t seem to blame her when she accidentally shoots him, which does imply that he, at least, respects her, is not a violent monster, and is able to forgive. 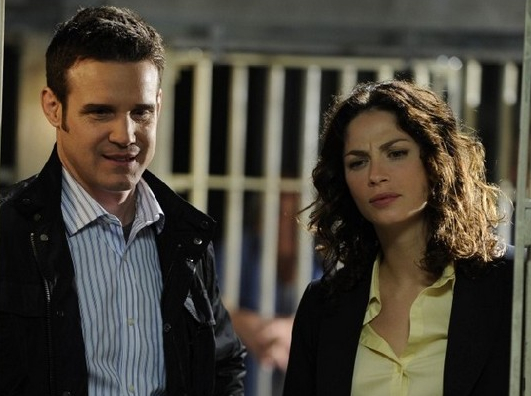 And forgiveness is really at the heart of this episode. From the alcoholic who falls to his death, after being “haunted” by what seems to be the ghost of the teenage girl he accidentally killed while driving drunk to the psychiatrist who commits suicide due to not being able to save him to Myka and Pete, each taking responsibility for the deaths of loved ones even though neither death was either one’s fault, the episode’s central theme is that the most difficult forgiveness to achieve isn’t from whatever god you might believe in or from the people you might have unintentionally harmed but from yourself. Pete was a little boy and couldn’t have known that his vibe might have saved his father’s life (and he actually comes to realize this week that, even if he had told his father, it wouldn’t have changed anything; his father would have gone to work and saved those people, risking and losing his own life in the process, because that is who he was), and Myka also knows that procedure-wise, she did nothing incorrect the day that Sam died (and this was backed up by multiple internal investigations of the event by the Secret Service). And yet, when one places blame on oneself, it can be difficult to get over it, despite how irrational that blame might be.

All of the fantasy sequences in this episode are really gorgeously directed and presented (the opening sequence is quite effective), but the climactic scene in which Pete appears alongside Myka to inspire her to see the truth about Sam’s death has my vote for one of the most powerful of the first season. McClintock and Kelly’s performances are both extremely moving (the tears in Myka’s voice as she tells Sam that he was early gets me every time), and the cuts between what is actually happening and Myka’s waking dream are superb.