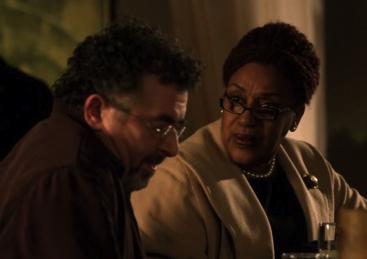 Meanwhile, there is some fascinating irony to the fact that now Pete and Myka are treating their old boss, Dickinson, the same way that Artie treats them, as well as how Artie and Mrs. Frederic treated Dickinson in the past. They aren’t, however, pleased with having to do this, so this is basically also an outgrowth of Artie’s refusal to let others in. Had he allowed them to be more upfront with Dickinson, it could have prevented his arrest and made things run much more smoothly, as well. This episode also gives us another tantalizing glimpse at Artie and Mrs. Frederic’s relationship. It’s always interesting to watch her act parentally towards Artie. She clearly cares for him but also has to sometimes take on the role of disciplinarian, much as Artie does for Pete and Myka. I love that, unbeknownst to them, she sometimes make him feel just as much of a kid as he sometimes makes them feel.

Furthermore, it shows us that Artie’s closed-off, often paranoid nature can cause trouble for her, too (we got a previous hint of this in “Claudia”), which is fascinating since one might have otherwise guessed that it would be practically a requirement of Warehouse agents. But, no, instead, that is just how Artie is. It certainly sprang from the experiences he’s had as an agent but she clearly feels that, while Artie should be keeping secrets from the outside world, he shouldn’t necessarily be doing so from his agents, particularly when a lack of information could be detrimental to their success. It’s also interesting to see that Artie has clearly screwed up in the past, chasing leads that led nowhere. What we don’t know in this episode but do learn soon is that part of her cause for concern might also be in protecting Artie from screwing up in the eyes of her bosses, who can be at least as formidable as she is.

Favorite Scenes: The Iceflower firework. Myka’s aforementioned redshirt scene. MacPherson’s confrontation with Artie. That little moment when the boy waves at Pete and Myka, when they’re hiding behind a tree. Mrs. Frederic appearing at the bar, drinking a martini. The wonderful silent scene between Pete and Myka in the back of Dickinson’s mens’ car, which is hilariously funny and demonstrates their great comedic chemistry. It also reminds me a bit of the Doctor and Donna’s silent reunion scene in “Partners in Crime,” the first episode of Doctor Who, Series 4.

Artie: (indicating Mrs. Frederic’s security guard) I’d tell you, but then he’d have to kill you.

Continuity: Of course, this episode introduces MacPherson, the Big Bad of Season 1, thus setting off the major arc of the second half of the season. It also begins to introduce key pieces of Artie’s pre-Warehouse backstory, including his real name, Arthur Weisfeldt, many more pieces of which fall into place in the second season’s “Vendetta” and “Secret Santa”. Additionally, it continues to build on the quieter arc of Myka’s issues with Artie, which come to a head in the very next installment, “Duped”. The start of the episode also shows Pete playing with artifacts, without thinking about how dangerous this could be. This bad habit will get him into particular trouble in the second season’s “Around the Bend”.

What did you think of the episode? Are you as fascinated by Artie and MacPherson’s relationship as I am? Were you as curious as I was about the real story behind Artie’s past the first time you saw it? Comment away!