Hello, everybody and welcome to the Farnsworth Society, where we, as a group, re-watch television shows that are dreampunk, steampunk, cyberpunk, anypunk-related and meet weekly to discuss each episode one at a time. Our first show is the steampunkalicious Warehouse 13 (it only seems fitting to begin the Farnsworth Society with this show, doesn’t it?). Today, we’re covering the sixth episode, “Burnout”. And please fill up the comments with your own thoughts, remembrances, favorite things about the episode, absolutely anything. And, yes, spoilers for any other aired episodes from Seasons 1-3 are allowed. We considered making it spoiler-free, but then decided it would likely constrain conversation far too much. Let’s get to it, kids!

“Burnout” might possibly be my favorite episode from the first season of Warehouse 13, but please don’t quote me on that if I end up saying that a number of more times before we get to the end of it. It is definitely, however, the first episode that truly begins to expand on the previous history of the Warehouse, as well as being our first introduction to a former Warehouse agent. What I might like best about the structure of the episode is that, going into it, you wouldn’t necessarily expect it to be a mythology-heavy hour, yet it eventually proves to be a crucial entry for many reasons. As already mentioned, it introduces us to an earlier era of Warehouse history, along with a couple–Rebecca St. Clair and Jack Secord–who have recurred twice since then, in “Where and When” and “3…2…1,” which might just be the two best episodes of the entire series. Who knew when first watching “Burnout” that it would set such a beautiful love story in motion? More on that when we get to those episodes, of course. 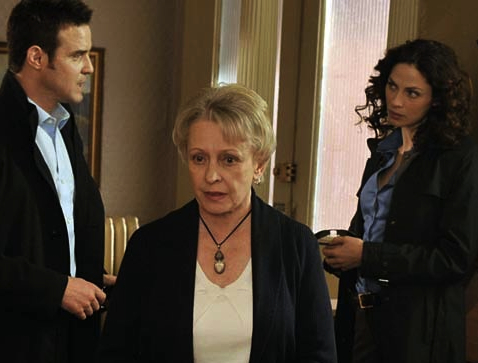 Even more interesting, however, is what Rebecca and Jack’s story says about Myka and Pete. When “Burnout” first aired, it seemed like the show’s writers were drawing intentional parallels between the two sets of partners in order to indicate a potential romantic future for our leads. In retrospect, however, this proves to be a red herring. Myka and Pete aren’t a romantic pairing. As Rebecca warns, however, just being Warehouse agents, each extremely passionate about his or her work, puts them both at risk. The Warehouse could very well lead to sad ends for Pete and Myka, just as it did for Rebecca and Jack, and this episode’s pensive ending is indicative of the darker current that runs throughout the series. The life of a Warehouse agent is dangerous, and most of them haven’t ended happily.

At the same time, Rebecca isn’t yet aware that her story isn’t over. “Where and When” will unexpectedly twist her fate, indicating the possibility that as much as the Warehouse can rob from its agents so can its wonders also help restore what they have lost. As far as this episode goes, however, it really reiterates just how brave Pete and Myka are to undertake this responsibility on a daily basis. Although they’ve heard of the deaths and disappearances of previous agents, this is the first time they are confronted with their own potential mortalities at the indirect hands of the Warehouse on a firsthand basis.

And the one whose life is put in greatest danger this week, Pete, faces that possibility with great bravery. Although he often projects a goofball facade, Pete is an extremely heroic individual, when it comes down to it, and this is arguably the first time we see just how self-sacrificial he is willing to be when duty calls. It is one thing to know that he has been trained to take a bullet for his president and country and quite another to see him nearly have to actually do so. The climactic scene in this episode is Eddie McClintock’s best performance on the show up to the point when it first aired–wild, turbulent, and powerful as hell. He beautifully conveys the rage building up within Pete due to the influence of the spine, his fear and sadness as to both his likely impending demise and the possibility that he might unwillingly hurt Myka and others, and his desperate resolve that the spine will never harm another living soul. It’s a stunning performance and one that is all the more impressive because of how real it feels. While watching it, I always forget that it’s a performance at all. Naysayers might call Warehouse 13 a silly science-fiction show but moments such as this provide drama every bit as palpable as other, more so-called high-minded fare. McClintock is absolutely heartbreaking in this scene, as is Joanne Kelly, who nails Myka’s fear not only of losing Pete but of losing another partner–which is also what makes her bonding with Rebecca so interesting. As much as it would hurt to lose Pete, he isn’t her lover, but her former partner was, meaning she can relate to Rebecca’s loss on two levels, as a woman who lost her lover and as a professional who has lost a partner in the past and can’t bear for it to happen again. 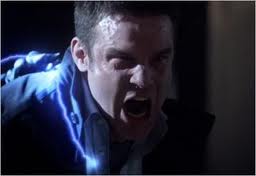 Going back to the parallels between Jack and Rebecca, and Pete and Myka, however, what stands out for me the most is the implication that the Warehouse and/or the Regents select similar personality types to be agents. Like Jack, Pete gets vibes, and like Rebecca, Myka has a Type A personality. This doesn’t mean that they are meant for one another but rather that they are both meant for the Warehouse.

Meanwhile, Artie and Claudia’s gradual bonding continues in this episode. Although we’ve seen Claudia working with the Warehouse tech before, this is the first time we learn her knack for creating new technological advances by merging various artifacts. This really nails the steampunk spirit–creating almost futuristic technology out of Victorian-looking tech. As Claudia tells Artie, it isn’t new-fangled, it’s “old-fangled.” Here, she creates a 3D holographic imaging scanner by blending a variety of Warehouse doodads, one of which ironically (or perhaps fittingly) was the imager that helped Pete and Myka track down Artie to Claudia’s location in the first place. And, of course, we also get Artie begrudgingly realizing how useful Claudia actually is, along with her “modern-day” knowhow.

Favorite Scenes: The best scene in the episode is Pete’s aforementioned near-nuclear-meltdown, but there are a number of other great moments, including Pete and Myka’s various meetings with Rebecca at her home, and the two scenes in the “Room Archive.” I absolutely love the fact that the Warehouse archives the rooms of its missing agents, as well as how it is depicted, reminiscent of the doors in Monsters, Inc. in a way, although the factory-style machine lifts and moves entire rooms into place. Roberta Maxwell also gives a terrific performance as Rebecca, capturing her sadness at what the Warehouse stole from her but also conveying the fire that once made her such a great agent. The final scene with the engagement ring is as lovely as it is heartbreaking.

Notable Quotables: “Is that a vibe, or is your stomach growling?”–Myka, to Pete

Pete: You’re not just his girlfriend.

Rebecca:: Welcome to the conversation

“Warehouse 13, next generation.”–Claudia, to Rebecca, while giving the Vulcan salute.

Continuity: As previously mentioned, we will see Rebecca and Jack again on two separate occasions, the first of which brings their story surprisingly full circle. Pete’s voracious appetite is referenced this week, particularly his love of cookies, as it has been since the show began. We will also see the Room Archive again, along with other past Warehouse agents. In many ways, Rebecca’s scene with Myka in Jack’s room foreshadows Artie’s later scene in MacPherson’s room.

Were you also blown away by Eddie McClintock’s performance? Did Rebecca St. Clair’s story also tug on your heartstrings? Discuss in the comments!