Hello, everybody and welcome to the Farnsworth Society, where we, as a group, re-watch television shows that are dreampunk, steampunk, cyberpunk, anypunk-related and meet weekly to discuss each episode one at a time. Our first show is the steampunkalicious Warehouse 13 (it only seems fitting to begin the Farnsworth Society with this show, doesn’t it?). Today, we’re covering the fourth episode, “Claudia”. And please fill up the comments with your own thoughts, remembrances, favorite things about the episode, absolutely anything. And, yes, spoilers for any other aired episodes from Seasons 1-3 are allowed. We considered making it spoiler-free, but then decided it would likely constrain conversation far too much. Let’s get to it, kids!

“Claudia” is an episode I’ve been eager to revisit ever since the Warehouse 13 rewatch began, since it marks the first appearance of our “girl genius,” as Myka labels her, and thus completes the family at the core of the show. Before this point, Pete and Myka were the brother-sister team with Artie as the cantankerous but lovable-underneath-it-all father figure. At the same time, however, he kept himself at a remove from them, in large part due to the fact that, as Mrs. Frederic reiterates in this episode, agents so often do die, go mad, go missing, what have you. He has lost many colleagues and friends in the past and so is slower to allow himself to invest himself emotionally in these new agents–at least wholeheartedly. The addition of Claudia, however, is what tips the balance over into family territory. She doesn’t only become a little sister of sorts to Pete and Myka but, due to working in the Warehouse with Artie versus Pete and Myka, who are more often out in the field on missions, prevents him from the near-full isolation he experienced up to that point. He did have Leena, of course, but she isn’t there on an everyday basis. Additionally, largely due to her spirituality, Leena is a grounded person who knows who she is and doesn’t need Artie the way that Claudia does, whether or not Claudia would ever admit it. And, of course, Artie comes to need her, too, whether or not he would ever admit it. 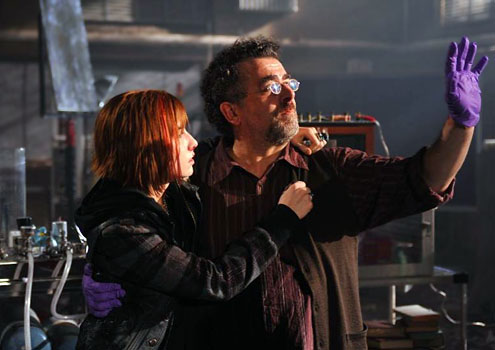 And, as this episode shows, the effect that Claudia’s presence has in Artie’s life is immediate. By the end of the episode, after brusquely telling Myka he doesn’t want to talk about the people he’s lost, he stops and immediately softens his response by saying “unless you want to talk about it…” Although the ensuing dialogue indicates that they both still feel a bit awkward about the idea, and this moment clearly does not fix everything (later in the season, Myka will again voice frustration at Artie’s distance), it is a step forwards, and it occurs due to the events of this episode, which force Artie to take a look at the impact that the way he lives his life has had on others. He has spent years temporarily inserting himself into peoples’ lives in order to collect artifacts and then disappearing again. For Artie, what happened to Joshua Donovan was a regretful accident, long since buried in the past. For Claudia, however, the wounds are still as fresh and painful as the day Joshua disappeared. And here, she forces him to acknowledge his responsibility in the fate that befell both Donovan siblings and to finally redress that wrong.

In many ways, Artie’s past behavior with Claudia reflects his current behavior with Pete and Myka. He tries not to get emotionally involved with them (though even Mrs. Frederic can see that he is having trouble maintaining the distance he claims to be making) and claims that it is all about the mission, about protecting the world from dangerous artifacts, not about personal feelings. He no longer thinks about what happened to Joshua because he has suppressed it, in order to avoid dealing with the fact that Joshua rushed to use Rheticus’ compass because of Artie’s lie that people were after it and tat as a result, this young orphan girl has been left, lost and alone. He didn’t step up at the time and agree to take care of Claudia. He just left her. In agreeing to aid her now and then taking her on as a Warehouse employee, however, he is finally making up for that lost time. It’s an admission that he was wrong, not only in leaving her to fend for herself after his own actions robbed her of her brother but also in simply assuming that Joshua was dead instead of investigating the possibility that the teleportation might actually have sent (or rather, trapped) Joshua somewhere. There’s an irony in the fact that Artie, who is exposed to “endless wonder” on a daily basis, often has a pessimistic attitude when it comes to chances of success. It’s understandable, though, since he’s been burned in the past. Joshua’s apparent death also ironically contributed to that very attitude. And yet Claudia shows him here that sometimes, the wonders of the Warehouse can have a healing effect, on multiple levels.

Meanwhile, Pete and Myka demonstrate their loyalty and care for Artie in how valiantly they strive to find and help him, even when Mrs. Frederic expressly forbids it. This episode continues to show how well they manage to work with one another, when they really put their heads together to solve a problem–Myka’s historic and literary knowledge combined hand-in-hand with Pete’s instincts. I particularly love how Myka supplies the fact that Rheticus was a very logical, ordered man who liked puzzles, and Pete extrapolates that to realize that he would have hidden puzzles in his objects. I also love how the key to saving Joshua lies not only puzzles but in the poem that Myka found earlier–a poem about Rheticus’ lost love, Thomas–firstly because of how matter-of-factly this gay love story is woven into the plot without judgment or hesitation on the characters’ parts, and secondly due to how this deeply human emotions of being separated from someone you love mirrors itself in Claudia and Joshua’s story and, by extension, Artie’s, as well. Artie may not even consciously realize he is missing someone in particular (though we know he has, from his father to MacPherson to other friends and loves he lost along the way, due to various reasons revolving around his career), and yet he’s starved for human companionship despite himself, companionship that he finally begins to reclaim in this episode, again despite himself. 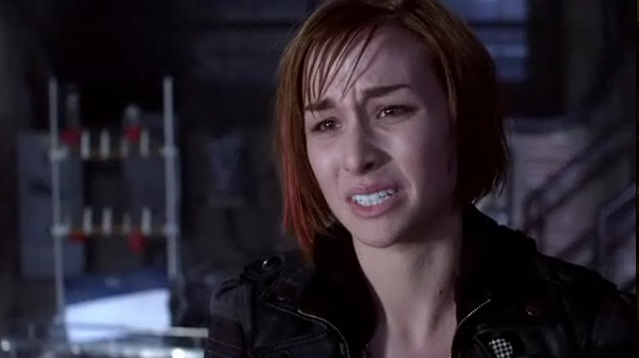 I, of course, also have to mention Allison Scagliotti, who is absolutely brilliant from the very beginning, making Claudia such a complex character–tough but vulnerable, independent but deeply lonely, ingenious but damaged. She tries to appear cool and unaffected, wearing her sarcasm like a shield, and yet she has been suffering for years. Scagliotti accomplishes something really masterful and underrated here, which is to convey Claudia’s hardness and pain at the same time. We meet her at a point in her life where she’s mentally unraveling. She only recently checked herself in and, a few months later, out of an institution and has been working herself beyond the brink in a desperate attempt to do the seemingly impossible. She manages to be prickly–which, come to think of it, is kind of like Artie–and biting, yet also sincere. It’s in the moments where her shell cracks and she reveals the sorrow and desperation beneath it all where we really start to connect with her. In some ways, she’s had to grow up much faster than other people her age–she’s had to take care of herself and, like Artie, has isolated herself for years–and yet, emotionally, she’s also younger due to having grown up outside of the norm. She’s socially awkward, which she tries to play off with a couldn’t-care-less attitude, even though she secretly does. Scagliotti conveys all of this and more from her very first appearance, which is really stunning work.

Favorite Scenes: The flashbacks are all wonderful, as are Pete and Myka’s attempts to locate Artie, but the episode’s best moment is the reunion in the dimensional bubble. Scagliotti beautifully underplays Claudia’s emotion in first seeing her brother again, only letting herself truly believe that he is back once they’re all back in the laboratory. Saul Rubinek is also wonderful in the scene, managing to convey how deeply sorry Artie is in a very Artie manner while also expressing his joy at finding Joshua and helping the siblings reunite. I also love how, while he delivers the information about the hidden panel, Claudia is the one to solve the password.

“Children, don’t fight. I can be both a d-bag and insane.”–Artie

“This wasn’t invented when this was made.”–Pete, re: the Farnsworth

Continuity: Claudia’s time in an institution is a plot point that recurs in future seasons, as does Joshua. This episode also includes the first time we learn of Pete’s deaf sister, as well as the first time we hear references to the fact that the Warehouse has enemies. And although at the time, one might have assumed that Mrs. Frederic knows exactly where the Rheticus artifacts are located because she is just that scary good, this is actually the first indication of her bond with the Warehouse. Next season, we learn that her brain is hooked into the Warehouse like a computer (the Warehouse itself is at least partially sentient), thus explaining her uncanny ability to call up data so quickly.