Hello, everybody and welcome to the Farnsworth Society, where we, as a group, re-watch television shows that are dreampunk, steampunk, cyberpunk, anypunk-related and meet weekly to discuss each episode one at a time. Our first show is the steampunkalicious Warehouse 13 (it only seems fitting to begin the Farnsworth Society with this show, doesn’t it?). Today, we’re covering the third episode, “Magnetism”. And please fill up the comments with your own thoughts, remembrances, favorite things about the episode, absolutely anything. And, yes, spoilers for any other aired episodes from Seasons 1-3 are allowed. We considered making it spoiler-free, but then decided it would likely constrain conversation far too much. Let’s get to it, kids!

“Magnetism” is actually one of my favorite episodes from the first season. It was the episode where, the first time I saw it, I felt like things were really starting to click on the show. It has a wacky concept, it’s suspenseful, it’s very funny, and even more importantly, most of the humor springs right from the character development. If “Resonance” was the episode that proved that Pete and Myka can work together as a team, “Magnetism” highlights the differences between them that still continue to grate on one another. And that makes complete sense because people who often seem to have such opposite personalities as Pete and Myka will often have this kind of push-and-pull relationship. Sometimes the melding of their differences will lead to almost perfect symbiosis whereas other times they’ll drive each other crazy. And it was smart of the show not to just instantly have them in perfect harmony or synchronicity right off the bat. As well as they can work together, we’re also reminded here that they can drive each other up a wall. In some ways, knowing each other a bit better now, they’re even more capable of doing so. With the title, “Magnetism,” you might think the episode would be primarily about what brings people together, but it’s also cleverly about the reverse side of magnetism, as well, the sides of the magnets that resist one another. 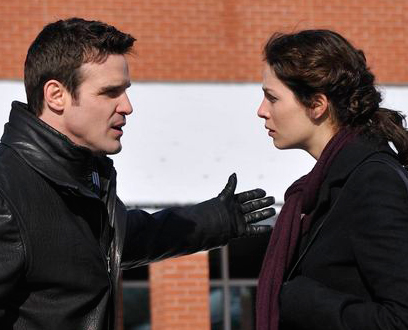 Pete and Myka are such siblings, with Artie taking the role of their stern, grouchy yet underneath-it-all loving dad. That early scene where they bicker so childishly that they nearly cause an artifact meltdown, leading to Artie dousing them with goo to neutralize their negative energy, is a classic. And I love how he later attempts to play them by telling Pete that he’s actually the one in charge but to let Myka think that it’s her, while telling Myka the opposite. And at the end of the episode, they’ll of course have their revenge by pretending that they’ve blown up his car. This bonding is just as crucial to their characterizations as their sniping at one another because, when push comes to shove, they love each other–again, in a brother-sister kinda way–and after they let all of their frustration out, they can just laugh and have fun together. Early on with the goo, they realize the ridiculousness of the moment and collapse into laughter, and, at the end, they work together as a team to “get” Artie. Again, just like many siblings, they’re at their closest here when they’re united “against” their parent, even if only jokingly. It’s also fantastic to see just how far Myka’s come, even this early on, since the first episode. She’s starting to let her hair down more and more, so to speak, not being quite so uptight.

Returning to their arguing, however, it springs from the same place that led to their initial dislike for each other–the importance Myka places on following protocol vs. Pete’s more fly-by-the-seat-of-his-pants approach to artifact-gathering. This episode adds another layer to it, however, in that Myka’s resentment of Pete’s behavior is revealed to at least partially be tied to his gender. In other words, she is tired of men being able to dictate the terms of what happens in her life simply by dint of their sex. At least on a subconscious level, she’s conflating Pete’s bad behavior with every male who’s ever tried to tell her what to do, all the way back to her father. There’s an irony in this, since Myka has responded to her father’s seemingly stern demeanor by being stern and regimented herself–more stereotypically masculine traits–whereas Pete can be seen as more flighty–more stereotypically feminine traits. But at the same time, it makes sense because the same actions that can get a guy labeled as being fun or awesome, can lead to a woman being reprimanded or scolded. (It’s telling that this happens in the same episode in which Artie continues to assume the hacker is a man, though that might, by this point, also be related to his vision of Joshua. He might be assuming that was his hacker.) Myka is annoyed that Pete has the freedom to goof off while she feels that she has to be the responsible one. Eventually, however, he reminds her that she can let loose  as well, while at the same time reasserting his own bravery in nearly getting himself exploded. 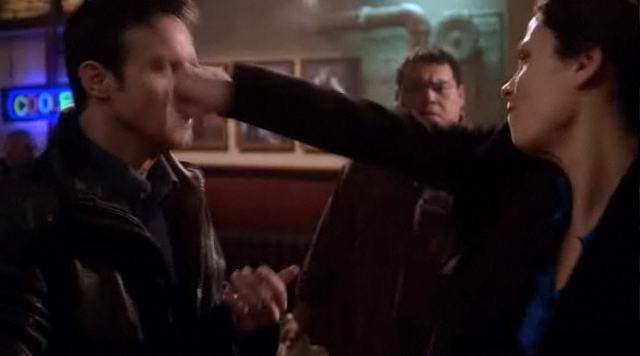 Speaking of which, this is also the first time we get to see Myka kick serious ass, as she takes out two guards in the first scene, without a weapon of her own and without breaking a sweat. This physical side also makes itself more comedically known when the influence of the chair causes her to repeatedly punch Pete in the face. Having this outlet for her “irresponsible” behavior to let loose is actually probably really good for her, as it evens the playing field between them and inspires her to team up with Pete to trick Artie in the end.

Also, as big a goofball as Pete can be, this episode also makes sure to remind us that this is largely a facade. In many ways, he is just as responsible as Myka. He just keeps that to himself more than she does. Here, we see him not allow the stresses of work to allow him to give into the temptation of alcohol at the bar. Instead, he takes himself to an AA meeting and, later on, prevents a fellow alcoholic from giving up his sobriety. Ironically, as the episode goes on, Pete is more in control of himself than Myka is. Granted, an artifact is involved, so that isn’t a poor reflection on her character. Instead, the artifact is simply a catalyst for a neat role reversal of the two of them that also illuminates a bit about Myka as a person while also further developing her character. Neat stuff.

Meanwhile, it’s also nice that the show is being even when it comes to potential romantic entanglements for Pete and Myka. It isn’t just the dashing-guy-flirts-with-a-new-lady-each-week show. Last week, Pete hit it off with the FBI agent. This week, Myka has a brief flirtation with the EMT. True, he’s married. But still. 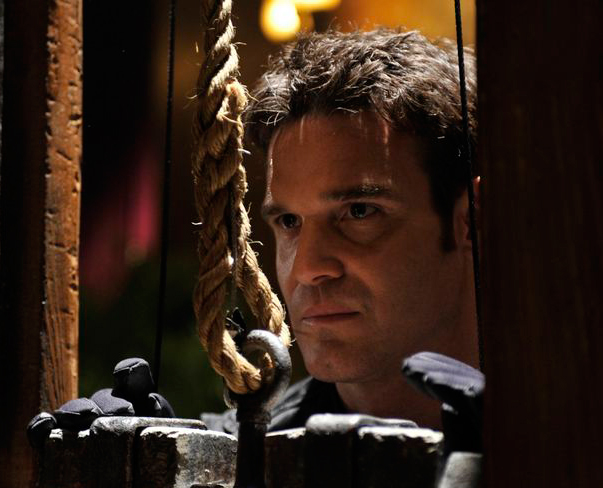 Pete vs. the Guillotine

Favorite Scenes: I’ve always been partial to the opening sequence where Pete and Myka are in France, swapping out the guillotine blade that killed Marie Antoinette, for a number of reasons: (1) I like how it establishes an even more epic sweep to the series in that Pete and Myka’s investigations are global rather than national (this might be the first hint that the Warehouse is truly above the US government) while also being done in a completely straightforward, business-as-usual manner; (2) I like its implication that there are lots of missions that we don’t see, and that this is just one more out of many; and (3) I like how it seems like its own mini-episode. What exactly the guillotine does, as well as how Pete and Myka came to investigate it, is left to our imagination. Instead, it’s this burst of action movie awesomeness that, at the same time, is very distinctively Warehouse 13. This scene could not have happened in any other show. I also love all of Myka’s slapstick, particularly in the bar, and that great shot where the security camera footage freezes just as the old lady is spelling out a Very Bad Word.

Notable Quotables: “You know, if you were gonna ask me how I would die, I would say that being beaten to death by my partner would be really low on the list.”–Pete

Continuity: Lena mentions that the Warehouse was designed by Thomas Edison, Nikola Tesla, and M.C. Escher. We had heard about Edison and Tesla’s technology in the Warehouse earlier, but this is the first mention of Escher. We later get to see the vault he designed in the second season premiere. Meanwhile, Artie continues to try to track down his hacker, who is finally revealed in the next episode. Myka’s issues with her father and Pete’s status as an alcoholic have both been brought up in the previous two episodes.

Do you love this episode as much as I do? Is there anything funnier than Myka punching Pete in the face? Comment away!