Hello, everybody and welcome to the Farnsworth Society, where we, as a group, re-watch television shows that are dreampunk, steampunk, cyberpunk, anypunk-related and meet weekly to discuss each episode one at a time. Our first show, which we began last week, is the steampunkalicious Warehouse 13 (it only seems fitting to begin the Farnsworth Society with this show, doesn’t it?). Today, we’re covering the second episode, “Resonance”. And please fill up the comments with your own thoughts, remembrances, favorite things about the episode, absolutely anything. And, yes, spoilers for any other aired episodes from Seasons 1-3 are allowed. We considered making it spoiler-free, but then decided it would likely constrain conversation far too much. Let’s get to it, kids!

“Resonance” doesn’t seem to be a fan favorite. I remember that, at the time it aired, a lot of people seemed disappointed with it, but I actually have a great deal of fondness for it. Its pacing is certainly a bit slower than the show would be once it hit its stride, and it has a few under-explained plot elements. Even after four viewings since it originally aired, I’m still not entirely clear on why the daughter didn’t reunite with her father until they’d reclaimed his music from the evil producer. I mean, I get it on a poetic level, which might be the point, but if so, I felt that could have used even an explanatory line of dialogue or two. 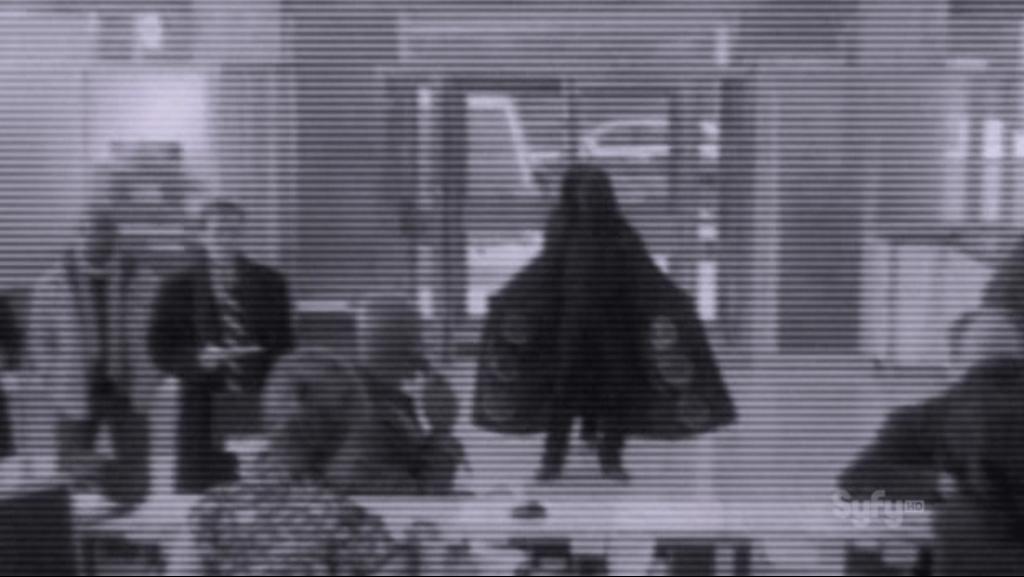 But, regardless, there’s something about this episode I find quite haunting. Right from the start, I liked that it wasn’t like every other “weird sciencey” type show. This case is quite unique: bank robbers who, rather than charging in violently with guns, simply hypnotize the people inside the buildings with music that makes them happy. I really love the ethereal depiction of the music’s effect on people–the bank teller with the single tear falling down her cheek, feeling loved without realizing what the source of these emotions are; the slow-motion wave effect when they get their captured guy back from the authorities–as well as the image of the masked criminals opening their black leather jackets to reveal speakers rather than traditional weapons. There is a bittersweet stateliness to this episode’s pacing that complements its subject matter beautifully and fits tonally with its wistful themes of recapturing lost familial connections and exploring how music can tap into our deepest, locked memories.

I also know that many viewers had trouble embracing the procedural aspects of this story, but even here, I find a great deal to admire. Once again, we see Pete and Myka continuing to learn about one another’s differing styles and even rubbing off on one another to some degree. They each contribute to solving the case in their own unique ways. Myka’s keen sense of detail causes her to notice the man on the cell phone on the security tape, as well as to connect the crashing tray with the concept of acoustics in the building. She also demonstrates quick thinking in planting her phone on the gang. Meanwhile, Pete gives Myka this chance to do so when he gets a vibe that anticipates the gang’s arrival (it’s to her credit that she responds to his vibe, instead of questioning it) and even starts to notice minute details himself when he correctly identifies the secretary’s perfume. Of course the detail Pete notices would revolve around being attracted to a woman! 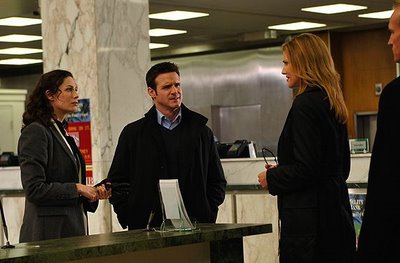 Regarding their friendship, the first time I saw the episode, I was thinking Myka might be jealous about Pete’s relationship with FBI Agent Cylon (for those few of you who might not be aware, Bonnie Belski is played by Tricia Helfer, who also played Number Six on Syfy’s rebooted Battlestar Galactica) on a romantic level, because I was used will-they-or-won’t-they? being a crucial aspect of this sort of show. Now that I know the show much better, though, and know that Pete and Myka are much closer to siblings than potential spouses, I can see it from a different perspective–that Myka’s more exasperated at Pete’s typical male response to a hot new woman entering his life, as well as giving him a bit of a sister-like ribbing. Which is only fair, because he is being very brotherly towards her, in his attempts to convince her to visit her father, despite their bad blood. In the end, it’s really lovely how the A-plot of the case merges with the B-plot about her relationship with Pete and her father. I love how Pete convinces her to forgo her “by-the-book” rules, particularly since the book she has always followed no longer applies. She doesn’t need to concern herself with nabbing “the bad guy” any more, just securing the artifact.

I also like that neither Pete or Myka are fully used to being Warehouse agents yet. Artie still has to remind them that he’s their new boss and that they should go through him, not Dickinson. And then he gets to show him just how mad his skillz, in fact, are when he gets them the voicemail. 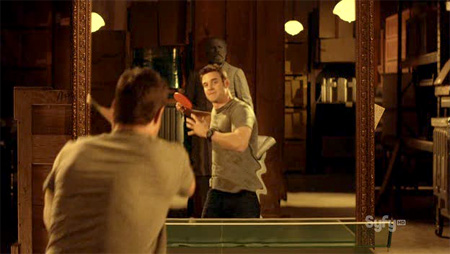 Pete Through the Looking Glass

Favorite Scenes: This episode has a lot of excellent moments, but my two favorites are Pete’s game of table tennis with what he thinks is his own reflection in Lewis Carroll’s looking glass (this scene takes on a more sinister edge when we learn the truth in “Duped”) and when Dickinson discovers Artie in his office, and Artie freezes him with his awesome steampunk camera of awesomeness, temporarily turning him into a literal cardboard cutout of himself. At this early stage of the show, it sometimes feels that, on the whole, it could stand to be a bit more bouncy and whimsical. We know that eventually does happen, but here we get to see some of those early bits of all-out imaginative fun that will lead to so much more, further down the line.

Notable Quotables: “If I say anymore, Mrs. Frederic will pop out and go all scary-face on me.”–Pete

“Well, Belski just got spanked, so let’s go strike while the butt is still hot.”–Pete 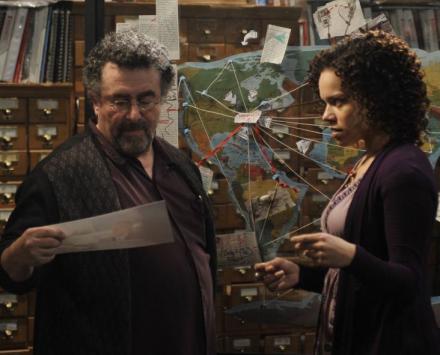 Artie and Lena Investigating the Breach

Continuity: No matter how many times I rewatch Season 1, I always forget how early the seeds of Claudia’s first appearance were planted. Of course, now we know that Artie’s mysterious hacker is the fabulous Claudia Donovan. I always find it interesting, in retrospect, how Artie’s first reaction is to assume that the hacker is male. Which is a bit sexist, yes, but on the flip side, just adds to what an awesome character Claudia is. Because, really, brilliant female hackers are not the norm on TV. Or much of anywhere, really. Geeks are usually assumed to be bespectacled guys like Fargo (the Eureka character who crosses over with WH13 repeatedly). But more on Claudia’s amazingness once she actually appears. Oh, and we also get our first sort-of appearance by her brother, Joshua, here, who seems to zap Artie to his alternate plane for a moment in order to warn him to “stop her.” Of course, we get a fuller explanation of this in the episode, “Claudia”. This week’s artifact’s also interesting, because it is the rare instance of an artifact created by someone still living. Actually, I can’t remember at the moment if there is another example of this. Anyone?

What did you think of “Resonance”? What are your favorite parts? Least favorite parts? Do you agree that it’s an underrated episode, or are you less pleased with it than I am?