The greatest challenge that faced the Marvel film that directly proceeded this one, Marvel’s The Avengers, was the need to showcase six superheroes in a single, balanced story, in such a way that allowed each one moments to shine and for complex relationships to form between the various characters, while also bringing together plot elements from five preceding films into a unified, climactic whole–a feat that writer/director Joss Whedon pulled off brilliantly.

So brilliantly that, in some ways, the next film in the Marvel Cinematic Universe series, Iron Man 3, faced an even greater challenge, namely reminding audiences why, after the flash! kapow! zoom! whizbang! spectacle of seeing so many heroes together on screen, that a lone superhero can still be such a powerful character on whom to center a film. And screenwriter/director, Shane Black (Kiss Kiss, Bang Bang) accomplishes this in a manner that common knowledge might dictate would make things even more difficult for a filmmaker facing the how-to-follow-up-on-the-biggest-superhero-movie-ever dilemma: for a large portion of this film, he actively strips Tony Stark of his high-tech gadgets, putting him in a situation where he is isolated and in the middle of nowhere, having to get by without the Iron Man suit–which has become severely damaged–and, for the first time in a standalone Iron Man film, having to face villains who do have superpowers with nothing but his genius brain to protect him.

In The Avengers, Captain America memorably puts Tony down by saying, “Big man in a suit of armor. Take that off, what are you?” to which Tony cheekily responds, without missing a beat, “Genius, billionaire, playboy, philanthropist.” And yet is Tony really as confident in that as he claims to be? He might outwardly hold on to his typical swagger as a facade, but the events of the previous film would be a great deal for anyone to handle, let alone someone who found himself having to face creatures such as gods and aliens that up until then he would’ve thought of as fantasy while being the only main member of his team without superpowers. Tony even traveled through a portal to an entirely other galaxy, farther into space than any other human as far as he knows has ever gone, and faced an army the likes of which the Earth wouldn’t be able to withstand without the Avengers and were they not able to then successfully close the wormhole. That breathless moment continues to haunt Tony in this film. Without his “Superfriends,” as his former bodyguard, Happy (Jon Favreau, who directed the first two Iron Man films) amusingly refers to them, would Tony be able to stand against such a force? What about if he didn’t have his suit? Is the Iron Man suit just a suit that, once Tony finished making it, anyone could put on (after all, in Iron Man 2, Nick Fury eventually accepts “Iron Man” but not Tony Stark into the Avengers Initiative), or does it go deeper than that? Would Tony still be Iron Man without the suit? Not just a genius, billionaire, playboy philanthropist, but still Iron Man? 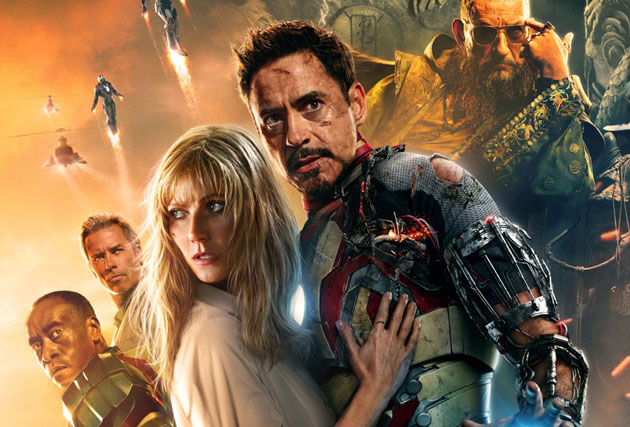 This film plays with these ideas of identity, the theme rippling across the plot on multiple fronts, whilst facing Tony up against his arguably most prominent nemesis from the original comics, an Eastern terrorist known as the Mandarin. Due to the name he has chosen for himself (which defines himself by his race, and implies that that race, by extension, should be perceived as a threat) and the fact that in the books, he began as a cartoonishly stereotyped Asian villain mastermind whose look is all but indistinguishable from World War II anti-Asian propaganda, the prospect of bringing him to the big screen had always been fraught with issues. It’s difficult to ignore the Mandarin, since he is such a prominent figure in the comics, but more difficult to actually deal with him.

Black’s solution, though it may annoy some purists, is brilliant on every level. Without spoiling any specifics, I will say that it has to do with the Mandarin–brought stunningly to life by the great Ben Kingsley–having appropriated various Eastern and Middle-Eastern cultural attributes with the express purpose of building on Western fear of these cultures, due to past events. He’s giving America and the world exactly the terrorist that it expects and for a specific purpose. His facade takes bits from various cultures that Americans fear–Arab, Indian, Chinese, Japanese–a walking, talking version of Orientalism. He perhaps most strongly resembles a cross between a samurai and Osama Bin Laden. And, again, the fact that he labels all of these various influences under the single, inaccurate moniker, “the Mandarin” makes a deliberate statement about how Western culture perceives the East as an indecipherable melange of non-white people.