It’s kind of sad that most people who hear the title, On Stranger Tides, think of the fourth Pirates of the Caribbean film, rather than Tim Powers’ ingenious, critically acclaimed, and widely unknown 1987 fantasy book, upon which it was ostensibly based. For what it is, the Pirates film is alright, mindless entertainment, and before I read Powers’ novel, it seemed like that might be enough, but now that I have, it just isn’t. That this monumentally intelligent and simultaneously, rip-roaringly fun (Zombie Pirates!! Derring-Do!! Sword Fights!! Magic Battles!!) work of literature is even mentioned in the same breath as Johnny Depp’s latest multimillion dollar jaunt as Jack Sparrow became almost offensive to me, as soon as I was fully in Powers’ masterful narrative grip. 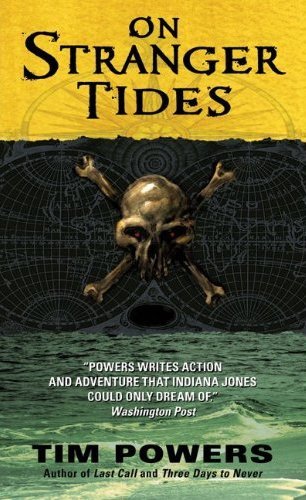 But perhaps Powers is having the last laugh. He surely made a handsome profit for having the title of his book attached to a film that has only two things in common with it: (1) pirates and (2) the Fountain of Youth. And even with that, the two bear little resemblance to one another. Disney’s pirates (even their Blackbeard) are lovably campy, B-movie, scenery-chewing, comic book pirates, whereas Powers’ are legitimate, historically accurate, and sometimes truly reprehensible. Meanwhile, both tales’ depictions of the Fountain of Youth are almost comically divergent from each other. Disney’s film seems to be trying to capture something of Powers’ elegant reinvention of the mythology, but so utterly missing the point and mangling it all so terribly that the film likely could have been produced without acknowledging Powers at all. But for Powers’ sake, I’m glad that he made more money on the title than the book itself likely ever did (which is also sad, if I actually stop to think about it, so I choose not to), and also thank the film for inspiring me to seek out the original novel. If it hadn’t been for Pirates 4, I may never have been made aware of Powers’ On Stranger Tides myself and would have missed out on an absolutely stunning read and one of the most beautifully, expertly melded fusions of historical fiction and fantasy I’ve yet to encounter.

For someone who is well-versed in pirate lore and legend, On Stranger Tides is something of a revelation. One would expect a novel that unites buccaneers with magic and zombies to go for a more theatrical, flamboyant, Peter Pan rendition of pirates, and yet Powers depicts them with the accuracy of a historian. He has done his research, and meticulously so, placing his characters in the context of the history of the time–the end of the Golden Age of Piracy–in a manner accessible to both pirate buffs and neophytes. Aficionados will marvel at the care with which he breathes life into the facts of (rather than the fictionalized beliefs about) pirate life and famous figures, such as the terrifying Blackbeard, while those who only know as much about pirates as Hollywood films have taught them will receive an in-depth and grandly entertaining education as to what being a pirate of the Caribbean was actually like–a life often fraught with hardship, discomfort, and misery.

Perhaps most impressive of all is how effortlessly Powers then inserts magic into his otherwise thoroughly realistic framework. Not only is his magic system brilliant, brilliantly worked out, and brilliantly depicted, but it complements the historical aspects in a manner that almost paradoxically strengthens them. He makes even the most outlandish of magic seem perfectly legitimate and fitting, and rather than ever allowing it to contradict or alter the facts of history, he instead uses it to explain them. Rather than being an alternative history in which an author posits what might have happened had magic been present in the past and then depicts how events would have diverged, Powers simply proceeds as if magic truly had existed, providing a legitimate source for the magic (the native cultures on the islands which the pirates inhabit), and using that to further ground his fantasy in what actually occurred. For example, he explains that the reason that the historical Blackbeard would stick slowly burning embers in his beard wasn’t only to terrify passengers of the ships he plundered but also as part of a protective magical ritual. The pure ingenuity and genius of another similar historical/magical twist in the book’s final third led me to gasp out loud. 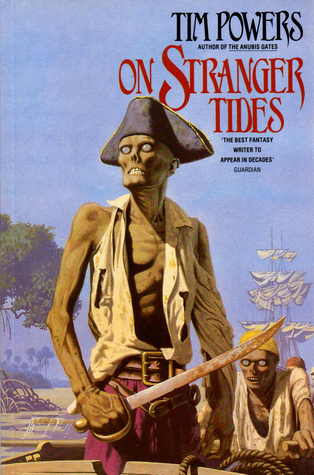 But On Stranger Tides is never just a mere merging of fact and fantasy. As impressive a feat as that is alone, Powers achieves something even more impressive, using it as a backdrop to weave a complex character arc for his protagonist, John Chandagnac, a young man who starts off being idealistic but has also experienced genuine tragedy in his life before the story began, which distinguishes him from probably the majority of young heroes in this sort of tale. Over the course of the novel, John will come to experience a sort of reverse Hero’s Journey–or perhaps an Antihero’s Journey would be more accurate, for Powers traces his evolution from John Chandagnac, youthful hero, determined to reclaim the family estate from the vicious uncle who robbed from his now deceased father’s inheritance, leaving the two in abject poverty, to Jack Shandy, an experienced, battle-hardened pirate. And he does so in a manner that parallels the traditional Hero’s Journey.

Like the typical hero, John initially refuses the call to action, though instead of the call coming from an old wizard, compelling him to save the world from destruction or some such, it comes instead from Phil Davies, a buccaneer who, along with his crew, attacks the ship upon which John is sailing, and shortly thereafter forces John into this new way of life. John resists for a long time, however, before circumstances eventually conspire to inspire him to take up the mantle of Jack Shandy out of his own free will and, ironically, out of his own sense of justice. In a certain sense, one could say that Powers is documenting the slow eroding of this young man’s moral code, but what he is really doing is showing how Jack grows to realize that the code with which he has grown up was instilled in him by a corrupt society with corrupt rulers–that morality itself is relative and often arbitrarily decided by those in power–and that “wrong” cannot be simply defined.

These definitions begin to blur for him. He asks himself whether wanting to avenge his father really makes him any more noble than a pirate stealing treasure from people who have themselves plundered this treasure from lands that weren’t theirs in the first place. He asks himself why an officer in the British navy has any more of a right to take a life than a pirate does. He even comes to see the hypocrisy in the government pardoning certain pirates, as long as they reform by a certain date. In other words, it is alright to keep performing piratical actions today, but if those actions extend into tomorrow, then one is again a criminal? There are certainly evil pirates, such as Blackbeard, but Jack comes to realize that being a pirate doesn’t make one evil, but rather that evil can flourish anywhere–on a ship of pirates or the navy. Jack can justify his actions to himself because whatever actions he performs from the moment he decides to become a pirate to the end of the novel, he does either out of a sense of loyalty to his newfound friends or in the interests of saving the woman he loves, Beth Hurwood, from a tyrannical father and assorted evil pirates and sorcerers who are only interested in using her for their own nefarious purposes. 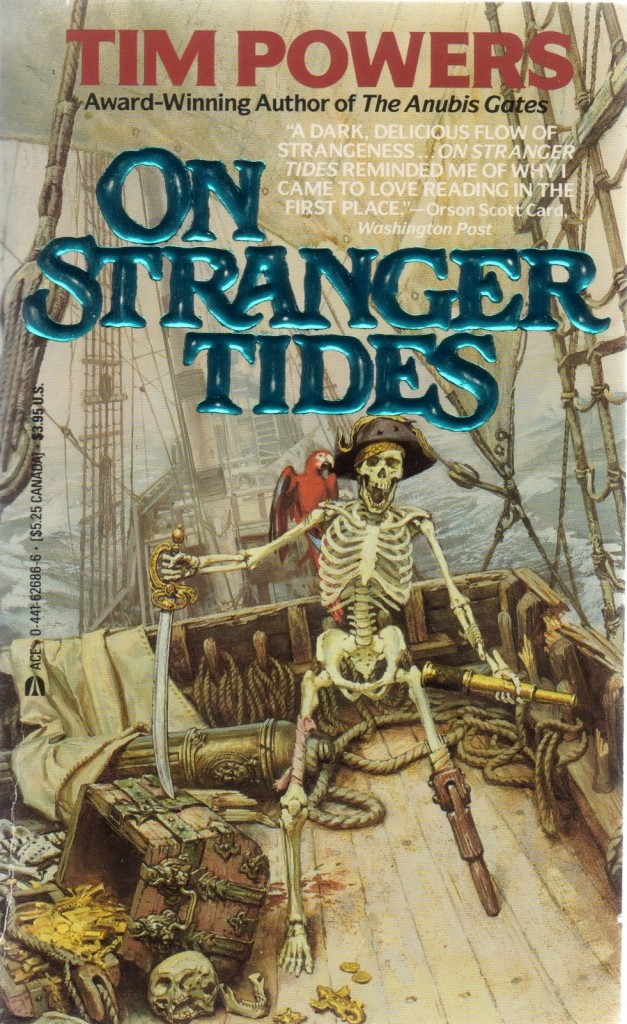 Another fascinating aspect to Jack is that he is a puppeteer, raised in the trade by his father. Powers uses this detail metaphorically throughout the work. At first, there is a level of irony to the fact that a puppeteer has himself become a puppet, forced to dance at the whims of outside forces beyond his control, but later, as Jack reclaims his own agency in the course his life takes, he once again becomes a puppet master, both in the form of his newfound leadership and the magical power he learns to wield. There is also a deliciously macabre instance of puppetry involving a corpse near the story’s climax that must be read to be believed. Speaking of which, the zombie pirates that crop up, under the control of a rival sorcerer pirate, are also a brand of puppetry. Beth’s father, Benjamin Hurwood and his partner in crime, Leo Friend, and Blackbeard view her as a sort of puppet as well, in a manner that I hesitate to spoil. And this returns us to the Hero’s Journey, for just like the traditional hero, Jack finds himself having to descend into the very underworld–both literally and figuratively–and to fight and vanquish monsters both literal and figurative in order to become the man he needs to be for himself, for Beth, and for his crew.

As far as dreampunk goes, while On Stranger Tides often sticks closer to magical realism, it does have elements in the form of fever dreams experienced when certain characters become overwhelmed by magic and delirium. It includes a number of absolutely luminous sequences in which an addled character will experience either a past memory or a dream version of a past memory, overlaying present events, the world around him or her perpetually shifting between awake and asleep, reality and dream. These scenes are among my favorites in the novel, and also are yet another reason I bemoan that the On Stranger Tides title was wasted on the fourth Pirates of the Caribbean. In general, On Stranger Tides could make a fantastic film, but these moments in particular are described with such cinematic flair that reading them, I felt as if they could be transferred from my mind’s eye directly to the silver screen. I can visualize the different layers of reality and dream bleeding and melting into one another, and once again wish it had gotten better treatment.

Tim Powers’ On Stranger Tides is a superlative novel that succeeds as a work of historical fiction, as a fantasy, as a character study, as a philosophical argument, as an exploration of adventure novel tropes, as a magnificently fun adventure tale in its own right. What will stick with me most, however, is likely how Powers manages to craft such an exciting and (to a degree) optimistic story without undermining his searingly accurate portrait of the grim realities of life or the fate of most pirates at the time, as well as his flawless execution of Jack Shandy’s character arc, creating one of fiction’s all-time great pirate (anti)heroes.