The Saga of David, Son of Sullivan

Home » Friday Feature » The Saga of David, Son of Sullivan

There is a used bookstore in Minneapolis, MN, called Uncle Hugo’s. It is “the oldest independent science fiction bookstore in America,” and, to my mind, one of the absolute greatest. I was first taken to Uncle Hugo’s by my great-aunt and -uncle, when I was 12. I have been a diehard fan and supporter ever since.

It was at Uncle Hugo’s a few years later that I discovered Tom Deitz‘s Windmaster’s Bane. This is the first book in The David Sullivan Series, an epic tale that begins—in this book—as a glimpse into the life of an American teenager so swept up in his love of books, mythology, and magic that he attempts to turn himself into a werewolf using a spell he found in a musty old book, rancid fat from a roadkill possum, and the moth-eaten collar off his mother’s old fur coat.

He fails, of course, but that image—coming as it did, just as I was the same age as David, and of an equivalent quixotic nature—resounded within me. I fell in love with the book in that moment. Unfortunately, or perhaps fortunately, there was a distinct lack of roadkill and musty incantations in my particular corner of the rural MidWest. 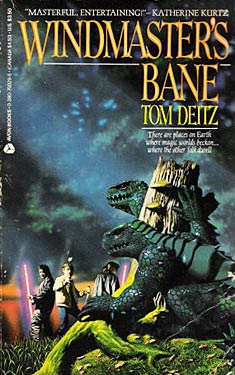 My forays into the world of David Sullivan were doomed to an early and abrupt end, however. You see, when I first found Windmaster’s Bane, the book was already out of print, and finding successive books in the series (which was then as yet unfinished) was a quest that ended in failure far more often than not. I, after all, lived over two hours from the nearest bookstore, and Amazon had not yet bloated into its current world-dominating reach.

Imagine my delight when I found David Sullivan again, just a few weeks ago, when my parents finally boxed up the small library I had accumulated throughout my teen years and unceremoniously dumped it into my lap (and my fortuitously acquired new domicile). I ran my fingers over the yellowed pages, and almost suffered death-by-falling-books in my haste to get to the computer and rustle up the missing volumes in the series.

And now I have them! I have them all! The first three I have read. The final six remain an utter mystery to me. And so, I have decided that I am going to read through them, and post a review/response to each every Friday, as a sort of tribute to Tom Deitz, and the David Sullivan I so loved and identified with as a bookish teenager lost far from the edges of literary (or at least book-buying) civilization. I want to track my remembrance of the ones I have read already, my reactions to the new books, and the progress of the characters and story as they evolve.

And I invite you to come along with me on this journey.

I expect it to be magical.