Pirate of the Year: “The Pirates! In An Adventure With Scientists!” (2012) 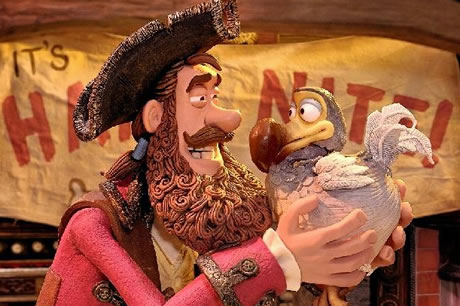 Based on the first two adventures in a comedic series of books by British author, Gideon Defoe, The Pirates! In An Adventure with Scientists! just might be the most fun pirate movie ever made. Now, of course, there’s absolutely nothing authentic in its depiction of piracy. Historically speaking, it makes the Pirates of the Caribbean series look like a meticulously researched Ken Burns documentary. But any sort of accuracy on any level really isn’t the point at all, which is to be a wild, rebellious, imaginative, cartoony celebration of the fantasy of pirates, skewed by a sense of humor that is genuinely Monty Python-esque. A lot of British comedies are compared to Python. From Aardman Pictures, the animation studio that brought us Wallace and Gromit and Chicken Run, this is one of the projects that actually deserves it. It shares a not-too-dissimilar primal sense of nonsense, an anarchic spirit, and a bizarre sort of illogic that wouldn’t feel out of place in a double-feature with Holy Grail. Granted, it has more of a plot (rather than simply being built on sketches) but its anachronistic gags and supreme silliness are reminiscent of that sort of seemingly unchecked mayhem that, underneath it all, is much smarter and more controlled than it seems on the surface. It’s a shame that Sony Pictures felt the need to re-title the film to The Pirates!: Band of Misfits in the U.S. What a vanilla name compared to the oddball, penny dreadful/B-movie satire of the original that sums up all of the film’s beautiful ridiculousness in 7 simple words, with 2 key exclamation marks.

The Pirates!‘ basic plot revolves around the struggles of our intrepid pirate captain–whose name just so happens to be Pirate Captain (voiced by Hugh Grant)–to win the coveted Pirate of the Year tropy, the only problem being that the winner must steal a staggering amount of treasure, and he is a bit lacking in the booty department. But, lo and behold! Who should happen to cross his path but Charles Darwin–yes, that Charles Darwin (the brilliant David Tennant)–who offers him a new opportunity for wealth! Darwin informs him that his beloved pet parrot, Polly, isn’t actually a parrot at all but is instead the very last dodo on Earth, and that were he to present Polly to London’s scientific community, untold riches would be bestowed upon them. This endlessly inventive story also involves a malevolent, scenery-gnashing Queen Victoria (Imelda Staunton) hell-bent on the destruction of all pirates, a highly intelligent monkey butler named Bobo, a Pirate King dressed like Elvis (Brian Blessed), a female pirate disguised as a man complete with fake beard and referred to as the Surprisingly Curvaceous Pirate (Ashley Jensen), and cameos from Jane Austen and the Elephant Man. The fantastic voice cast is rounded out by the wonderful Martin Freeman as the second-in-command, Pirate with a Scarf. (And although Russell Tovey voices Albino Pirate in the U.K. cut, I was surprised and dismayed to learn that he was replaced by Anton Yelchin for the American version. Given that they’re both speaking English and Yelchin isn’t exactly a household name, I found this an extremely odd decision.) 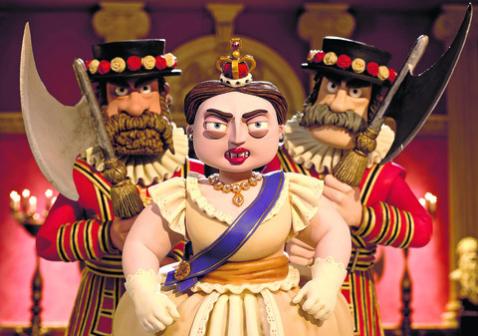 As you might’ve guessed from the mention of Victoria, The Pirates! should also be of particular interest to readers of this site because it does partake in a bit of steampunk. Besides being a fantasy story set in Victorian England that actually features Victoria herself and dabbles in sci-fi, it also features a dirigible, a sea monster, and at least one hilarious instance of steam technology that I don’t want to spoil. And with its freewheeling, anachronistic humor and surrealistic touches, it skirts along the edges of dreampunk, as well. Returning to this film’s Victoria, Staunton’s performance and the entire conception of the character is a thing of beauty. I’ve always loved the take-no-prisoners attitude behind the best of British comedy. I could never imagine an American film turning one of its most beloved leaders into a cackling villain, for fear of being dubbed anti-patriotic. This film, however, just runs with this idea of Victoria as an evil, pirate-obsessed despot who could very well have been a direct ancestor of Cruella de Ville. Come to think of it, it’s almost a miracle the film made it to American release at all, given it has the absolute gall to imply that the theory of evolution just might not be a work of fiction.

With a hilarious and very clever screenplay by the author of the original books, and healthy doses of sidesplitting slapstick, The Pirates! In An Adventure with Scientists! is a fantastic, animated comedy that kids might enjoy but adults–and particularly fans of the Victorian era–should get a real kick out of.

But wait! There’s more!! If you’re a fan of pirates (and who wouldn’t be?), be sure to check back on Saturday morning for our weekly Pirates feature!