I’m going to say something now that is fairly controversial and is probably going to alienate a large number of people, so please accept my apologies in advance. Tron: Legacy, the sequel to its Disney’s 28-year-old computer graphics-based extravaganza, is better than Inception. It may not have received the critical acclaim or recognition of 2010’s other “dream world” science-fiction epic, but nevertheless, Tron is more imaginatively conceived, more viscerally exciting, more visually stunning, and (what might be most surprising) more intelligent, tapping into the sweep of mythology, whereas Inception remains relatively earthbound and mundane, despite its pretentious trappings. In my Inception review, I discussed at length how, when taken purely as a whiz bang action ride, I think it is a very good film, but that much of its depth is, ironically, an illusion. The only reason I bring up Inception again is because I find Tron: Legacy to be its exact opposite: a film that seems to simply be a whiz bang action film, but that has hidden depth far more interesting to me than the simple “What is life, but a dream?”-ness of Inception. 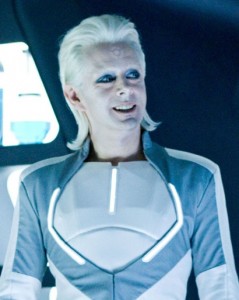 Michael Sheen as the Bowie-esque Zuse

Any viewer well-versed in his or her science-fiction film and pop cultural history would notice the numerous homages woven throughout Tron: Legacy, from the 2001: A Space Odyssey-ness of Flynn’s house to the Ziggy Stardust-ness of Zuse’s attire and attitude to the Star Wars-iness of Flynn’s Jedi-ish robe and much of the final sequence (Tron is very Han Solo in A New Hope), not to mention the countless nods and in-jokes to the first Tron. Returning to Star Wars, I would say that these references stand as deliberate clues (no pun intended) that the crux of the film lies in the same source material that inspired what is arguably the major science-fiction film franchise of the past 33 years–Joseph Campbell and the Hero’s Journey. For those of you not up on your Campbell, he was a famous professor and scholar of mythology whose most well-known contribution to his field was the identification of a series of recurring events, themes, and tropes that run throughout world mythology. In his estimation, all tales of the hero could be broken down into the same basic components: a young man, usually someone who grew up not knowing his father, receives some sort of call to adventure from a source either supernatural or mundane, but he refuses, because he is not ready to take up the mantle of savior, until a defining event (often a tragedy) inspires him to finally accept his destiny. Along his way, he battles and defeats a number of monsters, the most significant of which tends to either be his father, now turned twisted and evil, or some sort of dragon that represents his father.

Symbolically, the Hero’s Journey is the tale of the younger generation coming to gain dominion over the world that once belonged to its parents. The idealistic, young heroes of one generation eventually evolve into the next generation’s villains, either because they come to lose sight of the hopes and passions that once ignited them or simply because the tale is told from the young person’s POV, and, from young peoples’ perspective, parents are wrong. Generally speaking, however, this motif doesn’t spring from the literal belief that all adults eventually grow into bad people who must be destroyed, but is more specifically a symbolic manifestation and dramatization of  the process that each generation must embark upon, in order to take the throne, so to speak. Killing the dragon isn’t about literally murdering one’s parents but about shattering the negative feelings one might have about them and their rule, perhaps coming to understand them–their strengths as well as their failings–on a level that one never had before and thereby truly reaching adulthood oneself.  In Return of the Jedi, for example, Luke’s actions symbolically kill Darth Vader, freeing the soul of the kind father who had lost his way but had actually been buried beneath that metal mask all along. 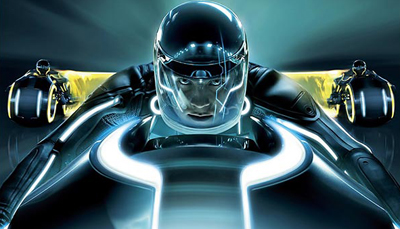 Over its course, Tron: Legacy proves to be a most interesting twist on the Hero’s Journey, one which follows the same general arc but which diverges in a number of key areas that, in some respects, make it a more philosophically mature take on the story than Star Wars, or at least one that is a less straightforward recreation of Campbell. At the start of the film, Kevin Flynn (Jeff Bridges), the hero of the first installment, disappears into the Grid, the computer world he created and discovered back then, leaving his young son, Sam, orphaned, only a handful of years after the events of Tron. In the present day, the now-grown-up (though still emotionally juvenile) Sam (Garrett Hedlund) has been forsaking his father’s legacy, refusing to head Encom, the corporation his father took over in the first film, leaving it at the mercy of its greedy board of directors, including the son of Dillinger (Cillian Murphy), the corporate villain from Tron. Despite the pleas of his father’s friend, Alan Bradley (Bruce Boxleitner, reprising his role from the first film, in which he also played Tron himself), Sam doesn’t feel ready to take on such a huge responsibility, though he does persist in launching hacker attacks on Encom, to try to steer it towards the path his father would have wanted. So, young man – check. Grew up without his father – check. Refusing the call – check.

Significantly, however, he isn’t refusing adventure and excitement, as the general, young pre-hero does. He’s actually quite a thrillseeker. What he is ignoring is the call of adulthood–the responsibility of a corporate job, the path his dad set out for him, even while at the same time, he secretly yearns for his dad, who he believes died years ago. Tron: Legacy is, therefore, basically re-contextualizing adulthood for a new generation. Back in the time of the ancient myths, adventure represented the responsibility and the duty that the hero had to undertake in order to make the world a safer place for others. In today’s world, however, the adventure is the fun part, whereas adulthood means settling down and having a grown-up job. The quest he undertakes in the film is what ultimately prepares him to finally make that step. Unlike Luke Skywalker, a tragic event doesn’t directly propel him into adventure. Instead, the events of this adventure lead to his decision to ascend into adulthood. He doesn’t accept the call until after he has taken the journey.