The Adventures of Young Indiana Jones 3.02: “Masks of Evil”

Currently, I’ve been rewatching and blogging on The Adventures of Young Indiana Jones, continuing last week with the sixteenth chapter, “Tales of Innocence”. Before proceeding with the next chapter, here are a few things you should know, if you haven’t read the earlier post: 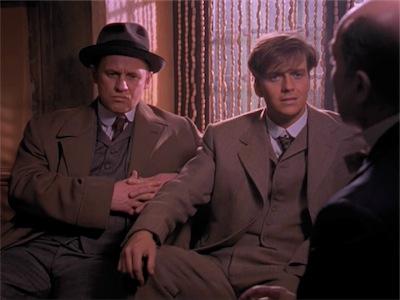 Another city, another love affair. And, of course, a lot more espionage. The first half of this paired episode finds Indy posing as a Swedish journalist in Istanbul, where he has fallen for an American girl who doesn’t know his true identity. Meanwhile, it soon becomes clear that, among the group of spies he is working with, one is a double agent. Both of these plot points have been handled on the series before, and so at face value, it might seem a bit repetitive.

If one can put aside skepticism that Indy hasn’t only fallen in love again–which, granted, isn’t too difficult, given that Indy has a different female companion in each of the original films–but wants to actually marry this woman–which is a bit harder to swallow, given his experiences in the war and with women such as Vicki in London and Mata Hari in Paris; why, even in the previous episode with Edith Wharton, he seemed to have grown quite pragmatic when it comes to love–the episode actually manages to mine a great deal of interesting emotion from the relationship, particularly when she discovers the truth about him. We have always seen the spy “game” from Indy’s point-of-view up to this point. He is our heroic protagonist, and so we understand the necessity of his missions. Here, however, we see the emotional toll of his work in the form of a woman who fell in love with one of his assumed identities and is crushed to learn he had been lying to her.

Before she learns the truth and it’s clear how heartbroken she is, there are even a few moments where the episode might even lead us to wonder whether she is the bad guy, as the series had presented multiple potential female love interests who turned out to be spies in the past. Though we have seen Indy try to discover double agents in previous episodes, this story does a particularly superb job of building tension by showing just how paranoid the life of a spy can make someone. This is a very film noir-infused episode, in style, tone, and content. Any one of Indy’s closest compatriots, including the woman he loves, could be lying to him, and the neat trick is that we as viewers grow equally paranoid.

Until suddenly, we are thrust out of Indy’s POV and into that of the woman who was hurt by his lies, which is as disorienting as it is powerful, particularly in the final moments of the story, when she finally decides to forgive Indy and arrives back at his flat to tell him just in time to be shot to death by the actual traitor. And while the circumstances that lead to her being dressed in Indy’s coat and hat might be a tad contrived, it’s another noir conceit and works in the moment, largely due to Sean Patrick Flanery’s truly heartbreaking performance. He similarly sells Indy’s disgust and anger at the higher-ups in French intelligence, who he now sees as playing with peoples’ lives, with no regard for their emotions nor safety whilst in pursuit of their intended ends.