The Adventures of Young Indiana Jones 3.01: “Tales of Innocence”

One could find this episode a bit problematic from a feminist standpoint. While both men are captivated by Guilietta’s beauty, neither really knows her, and she never gains any real character depth. When it comes down to it, she’s little more than the object of their desire, emphasis on “object”. In the context of the entire series, which has had a truly impressive roster of extremely strong female characters (particularly for such a male-dominated show), however, I find it forgivable. The entire situation and the young mens’ courtship of her is also extremely Victorian–with her grandmother tagging along all the while to preserve her honor–and so it’s no wonder that they never get a chance to really know her beyond admiring her beauty. And, again, it’s time-period-appropriate, not to mention the fact that the two men are the ones who end up making complete fools of themselves, culminating in her becoming engaged to another man neither knew about–an Italian whom she has known since she was a little girl.

They continue to be at each other’s throats–each one blaming the other for her decision–until they are both nearly killed in a bombing, because they are so focused on yelling at each other. Once they realize what is happening, however, Hemingway saves Indy’s life, and the two make up while recuperating in the hospital. Early on in the episode, Hemingway had lamented that, due to being an ambulance driver, he wasn’t seeing any action, and anyone who knows anything about his life would know the irony in that, given that he would end up being severely wounded and receiving a medal of bravery for carrying an Italian soldier to safety. By the end of the episode, we learn that in the world of Young Indiana Jones, Indy is that “Italian” soldier who Hemingway saves (a nifty nod to Indy’s chameleonic language skills). And of course, Hemingway gets his wound in this episode, as well, the same way he did in real life.

The episode ends on a comedic note that is funny in the moment while also having additional dramatic irony for those who know Hemingway’s story. Just after promising to never fight over the same woman again, Indy and Hem look up and both catch eyes with the same nurse. Although her name isn’t given, this is likely Agnes von Kurowsky, who Hemingway fell in love with in real life and who had promised to marry him–until breaking it off after he returned home to America, telling him she was now engaged to an Italian, a fact that the episode might also have been intentionally foreshadowing through Guilietta’s engagement.

Also of note: in the final scene with Hem, Indy expresses a desire to attend the University of Chicago, after the war is over, in order to study archeology, which I believe is the first time on the series he’s expressly voiced this desire. As Indy buffs know, it is also precisely what happens. 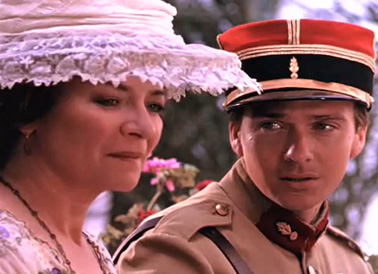 [Note: Although this story’s title seems to indicate it takes place in the year previous to the former one, it actually occurs shortly after, according to the new chronology of The Adventures of Young Indiana Jones, and as indicated by a number of new transitional scenes, so it’s best to just ignore the date.]

Indy’s friendship with a now-famous author before he was a famous author is immediately followed up by a friendship that verges on romance that he forms with then-famous novelist Edith Wharton. On the whole, this is a much less successful story than the previous one. The pieces don’t all come together nor dovetail as smoothly, and the feelings of longing that Wharton eventually reveals for Indy feel a bit out of the blue, given that they really only have one extended conversation with one another before that point.

What does work, however, is the episode’s portrayal of Wharton. As with the series’ best depictions of historical characters, you get a real sense of her as a person in a short amount of time. It captures her strength, her honesty, her wit, and her unflinching ability to retain her sense of her own self-possession and power in a world run by men (a sharp contrast to Guilietta). Her extended scene with Indy is also lovely. He opens up to her as we have only rarely seen him do before, discussing many events that had previously occurred on the series, perhaps most prominently his short-lived romance with Victoria in London. I really like that she has continued to have an impact on his life.

I was a little less convinced by Wharton’s request that Indy meet up with her again later. She seems too mature and grounded to suddenly seem to fall head over heels for him, although I do like that Indy is honest with her and the chances of them reuniting after the war. He has grown a great deal from that boy who wanted to impetuously marry Victoria or the one who expected the older Mata Hari to change her life for him.

The episode also has some genuinely thrilling spy stuff. Early on, Indy saves his own life and those of some men when captured and about to be executed in a very creative way: he requests a final cigarette, taking a swig from a water canteen that he knows to be full of alcohol, so that when the man reaches towards him with a lit match, he spits it onto the flame, causing an eruption of fire that sets the man and others nearby on fire. Later on, he singlehandedly figures out how a certain cache of weapons is being stolen, via a secret passageway, and correctly identifies the culprits, culminating in a sword fight that ends with a traitorous French general plummeting to his death.

With each episode, Indy is one step closer to the film hero we all know and love.

Previous: “Daredevils of the Desert”

Next: “Masks of Evil”