In one of those moments in which Young Indy really gets to the human heart of a historical character, Karl I expresses serious worry about what is currently happening in Russia–the Russian Revolution, in which people dissatisfied by (amongst many things) their monarch embroiling them in the war, overthrew and slaughtered him–and fears that the same could happen in Austria, a thousand-year-old monarchy ended due to a wrong decision on his part. And although the episode doesn’t reveal it, this foreshadows the fact that he will indeed be the last emperor of Austria, although he won’t be overthrown or executed. Even here, it isn’t that he selfishly cares only about his own fame, but that the weight of the responsibility of maintaining his country’s legacy rests heavily on him. The viewers and Indy can see a good man being overwhelmed by his enormous duty.

After Indy and the boys set on a course back to France to deliver the letter, there are some more fantastic action sequences, a few times during which I legitimately had no clue how Indy could possibly get them out alive–again, very much like in the film series. At one point, they’re being chased through a dark street in the dead of night by the bad guys, which calls to mind the thugs who were chasing Indy and Norman Rockwell in Paris years ago, however without a hint of comedy or youthful fun this time around. This feels deadly serious by comparison. The humor comes later, however, with yet another Star Wars reference. Indy and the brothers escape via the sewers–Indy’s idea–to which Sixtus responds, “What an incredible new smell you discovered!,” which, amusingly, is just what Han (of course, played by Harrison Ford aka adult Indiana Jones) said to Leia after she convinced him to evade capture by jumping into the Death Star’s garbage disposal unit.

Speaking of Indy and the boys, this thread is also handled beautifully throughout. When they first meet, it is basically hate at first sight. Indy sees a pair of irresponsible, poncey rich kids who he expects have no idea what it’s like to actually put their lives in danger, and they have very little respect for him, either, thinking him to be just a humorless soldier, but over the course of their time together, they prove themselves to one another and all become good friends to the point that their goodbye is actually a bit sad. It’s also, however, exhilarating due to one last, great escape scenario in which they knock out two German guards, the brothers nicking their uniforms to escape (another Star Wars callback to what Han and Luke do the stormtroopers), and Indy climbing on the train and running down its length until he–while still standing on it–crosses the neutral zone into Switzerland, where they can’t touch him. Even the head German bad guy chasing him tips his hat to him in respect for that bold move! 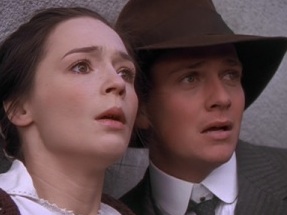 This is one deeply depressing episode of Young Indiana Jones. And I don’t generally have a problem with the sad episodes. In fact, I’m glad that they give World War I the weight it deserves and show the true horrors of the battlefield, rather than a glorified Hollywood version. Here, they turn a similar, dark eye towards the Russian Revolution in a story about Indy making Communist friends while he’s stationed in Petrograd. There are things I really like about the episode, particularly the depiction of Indy’s friendships and a touching story about one young woman who falls for Indy deeply. I like that the Bolshevists’ point-of-view is shown in detail and they aren’t demonized–a rarity on American TV. And I even respect its tragic conclusion, when Indy’s friends refuse to believe him when he warns them not to join a particular march because the Cossacks are waiting to gun them down…

…except, by this point, it’s just starting to feel too much. Too much sadness. Too many real-life horrors. The more adventurous, positive, fun vibe of the past few episodes has been a nice relief from the war’s darkest episodes, and character-wise, it feels time for Indy to continue down that heroic mantle path rather than once again being stuck in an horrible situation he is helpless to do anything about.

To a certain degree, Indy’s level of accomplishment in the two stories so far about his spy missions has been an illusion, as he technically “fails” both times, but he managed to destroy a new, advanced enemy aircraft in his first mission, for which I think he deserves more credit than he got, and the second time he managed to keep two important people alive in some very dangerous situations. Here, he can do nothing but watch helplessly as his friends are gunned down.

We have had so many war-is-hell and governments-are-even-worse stories (it’s particularly reminiscent of the Bloody Sunday story set in Dublin, in terms of downtrodden citizens rebelling and being violently quashed) that, while this one may be well-told on its own, it feels practically redundant at this point and just a sad retread of the themes the show has dealt with time and again. I’m hoping the next set of episodes veer more towards the tone of the former half of this 90-minute installment than the second. The title seems to imply so, at least!

Previous: “Attack of the Hawkmen”