Currently, I’ve been rewatching and blogging on The Adventures of Young Indiana Jones, continuing last week with the twelfth chapter, “Attack of the Hawkmen”. Before proceeding with the next chapter, here are a few things you should know, if you haven’t read the earlier post:

2.06: “Adventures in the Secret Service” 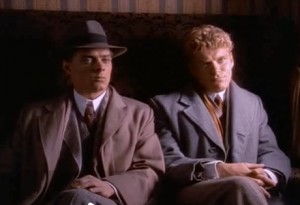 Young Indiana Jones‘ more fun streak continues in this next espionage adventure, and as with the last, it’s extremely welcome, as well as more at home with the tone of the famous film series from which it springs, setting the future course our hero’s life will take more directly than many other Young Indy chapters. As I’ve said before, this isn’t to say that the darker episodes of the series are in any way inferior. I actually like that the show takes the time to really develop the character and put him through some genuine, non-pulp experiences, every piece of which adds to his evolution into the man he will become, but I can’t say that it isn’t a more geekily fun show when Indy is going on adventures.

And here, he is once more on a spying mission, on which we can actually see his skills in the field develop from one adventure to the next. As with the previous episode, he is still “baking” and hasn’t yet emerged the fully-cooked Indy of the films, and yet he shows significant progress as an adventurer–more assured, more confident, and thinking even faster on his feet than before, in order to keep his charges and himself alive in some very dicey situations. His mission is to help secretly deliver Princes Sixtus and Xavier of Bourbon-Parma to their sister, Empress Zita of Austria, wife of Emperor Karl I of Austria. The hope is that Indy and they will be able to secretly strike up a negotiation with them in order to get Austria–without Germany’s prior knowledge–to surrender, decrease Germany’s power in the process, and to perhaps thereby end the war.

This feels like even more of a spy episode than the previous one, with secret passwords, chases, potential imminent death at every turn, and the paranoia of never fully knowing who one can trust. There are a number of times in which Indy and the princes are thrust into situations in which they have no way of determining whether they are placing their trust in the right people or are about to be led to their deaths, and the episode skillfully weaves numerous twists and red herrings, leaving audience members just as disconcerted as our hero and his charges.

In one of the episode’s best scenes, Indy (shortly after delivering yet another “I’ve got a bad feeling about this,” the second instance of this particular Star Wars easter egg in the series) and the princes are driven to a dark, scary fortress and are instantly surrounded by men with guns. They are then marched into a dark, looming mansion with walls lined practically top to bottom with forbidding, foreboding antlers, and then down dark stairs to the basement, where they and we are positive they will be thrown into a horrific dungeon or worse. The situation could not seem more dire nor marked by impending death…only for them to discover, at the lowest level, a more opulent, sumptuous, gleaming living space than Indy has seen since he was a child touring Europe. Moments later, the emperor and the princes’ sister emerge with hugs and warmth.

As it turns out, Karl I is very interested in suing for peace, however his diplomatic adviser, Count Ottokar Graf Czernin, played by Christopher Lee, who positively drips with evil intent as usual, warns against it. It’s not clear whether the man is actually secretly working for Germany or he is just that callous regarding the countless young men dying in this war, but the emperor clearly seems intimidated by him, regardless, sneaking a signed letter to Indy to deliver to the French under Czernin’s nose, giving into all of their demands.