The first occurs when Fives, Hardcase, and Jesse approach Rex with their plan to disobey Krell and fly the ships into the hub Separatist ship and take it out. Although he can’t outwardly support their mission, he doesn’t stop them, and later outwardly blocks the rigid Dogma from reporting them. During the battle, the three behave heroically, actually following in Anakin’s footsteps, having gotten the idea from what he did as a boy in Episode I. And when things look hopeless, Hardcase gives his life to save those of his brothers as well as to defeat the enemy–a brave, noble act. Upon their return, however, Krell disregards their bravery and their accomplishment, as well as Hardcase’s sacrifice, and instead condemns Fives and Jesse to death. As the firing squad is about to do their duty, however, Fives pleads with them to spare him, arguing that they may be soldiers but they are also men with a sense of honor, and killing two of their own for attempting to save the rest of them is morally wrong. They listen and refuse to carry out the order, to Krell’s fury.

Shortly thereafter, Krell sends them into battle, informing Rex that the other side had stolen some of the Clones’ gear and would therefore look like them. Still being the ultimately faithful military man, Rex believes him and, when they encounter troops from the other side dressed as Clones, orders his men to fire upon them. Soon afterwards, however, in an absolutely horrific, soul-shattering moment of revelation, Rex realizes that they aren’t Separatists–that Krell has, in fact, split up the Clone squadrons and attempted to orchestrate their mutual destruction. 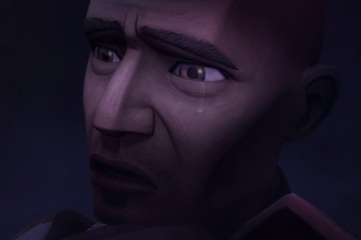 After numerous lives are lost, Rex manages to stop the carnage and make it to the other side, where he discovers Waxer–another Clone we knew from previous episodes, most memorably as one of the two who saved the small Rylothian girl–mortally wounded, who tells him with his dying breath that Krell had told him the same lie: that the enemy would be wearing Clone uniforms. Watching this scene, I could practically hear my heart pounding in my ears. Having made a recognizable Clone such as Waxer one of the deaths at the hands of his own brothers was a brilliant move on the part of the writers–cruel but necessary. Because, as we know, the one thing more important to the Clones than fighting for the honor of the Republic is fighting for their brothers, and the knowledge that they’ve been manipulated into killing one another is a betrayal beyond words–and having one of the deaths be someone we know personalizes the horror for us, as well.

Even knowing how loyal the Clones were to the Republic, I had wondered in the past how the men we had come to know–men with personal lives and wishes, not a mindless hive mind army–could ever become the Clones who mercilessly hunted down the Jedi in Episode III. After all, they fought beside the Jedi. They trusted them. They respected them. How could they all listen to and obey Palpatine’s deadly order, without some sort of implanted sleeper command that overrides their will (which Lucas claims isn’t the case)?

One of the greatest ironies of this story, which revolves around that very question of whether a Clone could follow an unjust order, is that it might provide that very answer. Because in this story, Rex and many of the other Clones face up against the very first traitorous Jedi they had possibly ever met (or at least the first who had been presented to them as a Jedi, unlike Dooku, who had been known as an enemy from the start). It’s quite possible that it had never occurred to any of them before–particularly not someone like Rex or Dogma–that the Jedi who currently lead them could ever betray them. The Jedi always seemed so noble and pure, good fellow soldiers and, in some cases, even friends.

But Krell changes things. Now, they see that a Jedi could become an enemy of the Republic and could work to undermine the existence of the very way of life that they fight to uphold. Ironically, learning not to follow Krell’s order might be the very thing that paves the way for them to follow Palpatine’s, because now that Krell has established for them that even the Jedi could become corrupt, the next logical step would be for them to not hesitate in believing Palpatine when he tells them that the Jedi have betrayed the Republic. 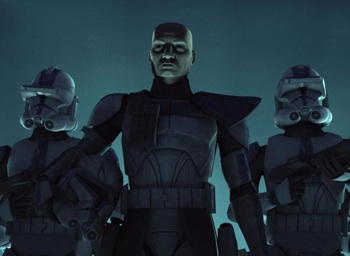 And that is why while, on the one hand, it is immensely satisfying when Rex finally decides to fight the awful Krell, on the other, the image of the Clones rising up against a Jedi–fallen or not–can’t help but ring with disquieting foreshadowing. And after three and a half episodes of being irritated by Dogma’s, well, dogmatic behavior, there is still something heartbreaking about when he finally kills Krell. To watch someone who had truly believed in the system have his faith in the system shattered, is deeply sad.

Even Rex of all people for the first time questions just what they’re fighting for in the first place and what will become of his brothers and he–people who were created to be warriors–after the war is over. And one wonders whether that answer–that his brothers and he, assuming he lives, will become the enforcers of the Galactic Empire’s rule–will horrify him, or whether the seed of doubt in the Jedi that Krell has planted here might make him ultimately instead decide  that he is, once again, doing the right thing.