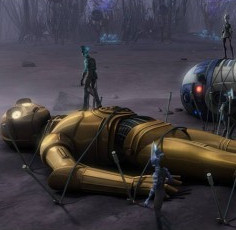 My Clone Wars viewing continues with episodes 4.04-4.06, all three of which have the related theme of tertiary characters stepping into the forefront and proving themselves heroic. In the first one, Jar Jar demonstrates the bravery-mixed-with-foolishness that has typified his appearances on the series, and in the latter two, Threepio and Artoo go off on a series of incredible adventures, saving multiple worlds and peoples, and all completely, comedically unbeknownst to anyone else. While all three are entertaining episodes, I don’t, however, have a great deal of in-depth points to make about them, so this will be a quick post.

“Shadow Warrior” finds Dooku playing the same political games he did in the previous arc against the Mon Calamari, here again trying to incite the Gungans to war against the Naboo. In an interesting twist that hints to other aspects of Gungan culture we may not have realized before, however, his secret ally in the Gungan world helps him gain sway over the political leader through use of a mind control necklace that seems to have mystical properties, perhaps related to the Force, rather than through assassination or outward intimidation. In a nifty twist on The Prince and the Pauper, after the Boss is incapacitated, Jar Jar has to pretend to be him, in order to stop the war and eventually face Grievous. And in a truly triumphant moment, the Gungans accomplish something no previous characters have been able to do: namely successfully attack and capture Grievous–an enormously gratifying moment that recalls the Ewoks fighting the stormtroopers in Jedi.

The episode also presents a fascinating moral dilemma and character moment for Padme, when Dooku captures Anakin, and she has to decide whether to trade him for Grievous or to save thousands, if not millions, of lives by giving him up. Interestingly, unlike Anakin would have, she does begin by refusing to put Anakin and her happiness above the needs of the entire galaxy, but Jar Jar, acting as her moral compass, talks her out of it, telling her that they can’t leave their friend to be tortured and/or killed by Dooku–the irony being that, though Jar Jar is well-meaning and arguably right, it also is yet another moment that could have derailed Palpatine’s plans had things gone differently, which makes it thematically reminiscent of when Jar Jar, in Episode II, with the best of intentions, spoke in front of the Senate, helping Palpatine to gain greater power. 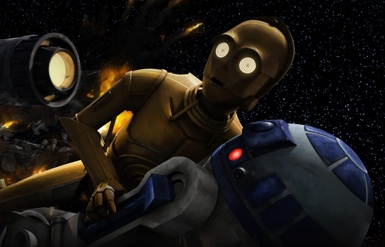 The ensuing Threepio and Artoo episodes feature a series of situations in which the two beloved droids find themselves interacting with various cultures and saving them from various problems, often without meaning to do so. While I’m not sure whether these two episodes have a remarkable amount of depth, they are a pleasure to watch, particularly as an opportunity to see Threepio and Artoo being heroes, and often in a completely roundabout way. These episodes reminded me a lot of the Buffy episode, “The Zeppo,” in which Xander goes off on his own and has an amazing, heroic adventure, saving the world, while none of the other characters notice, because they’re too busy fighting off yet another apocalypse. In the first episode, our intrepid droids have to solve a riddle in order to save an underground world of mystical creatures in a very Tolkienesque scenario, whereas the second is a literary mash-up between Gulliver’s Travels and The Wizard of Oz. On the first world, they encounter a group of tiny, Lilliputian creatures who tie them to the ground, much as happened to Lemuel Gulliver, until Artoo accidentally frees them of their oppressive leader by falling on and squashing him. I half expected a rousing chorus of “Ding! Dong! The Witch is Dead,” before Threepio and Artoo leave these fractured people to try to figure out a system of government for themselves, soon seeming to descend into chaos, like a satirical example of why Star Trek instituted the Prime Directive in the first place. And on the next world they’re on, Artoo, much like Dorothy’s Toto, helps uncover men behind the curtain, or rather droids behind the curtain, who had been oppressing a relatively primitive society with an imposing hologram. A lightweight set of episodes, perhaps, but an extremely entertaining one.