[Note: The following post contains spoilers for the Star Wars: The Clone Wars episodes, “Holocron Heist,” “Cargo of Doom,” and “Children of the Force”.] 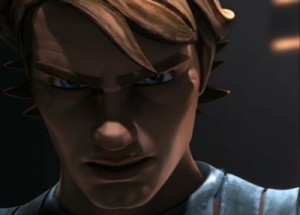 As fantastic as I found the first season of Clone Wars, the trilogy of episodes that opens the second season–2.01, “Holocron Heist,” 2.02, “Cargo of Doom,” and 2.03, “Children of the Force”–instantly raises the bar to a level at least the equal of a feature film. When the Clone Wars film hit theatres, many critics complained that it felt too small, like watching episodes of a children’s cartoon series, which it was. I wonder, however, how they might have reacted had the film been comprised of episodes as strong as these three, with plotting as twisty as Episode II–yet more straightforwardly introduced and easier to follow–and action, suspense, and character writing to rival much of what Hollywood produces these days. Additionally, the dramatic irony regarding the tragedy towards which this series is inevitably hurtling has never been quite as prominent in previous episodes as it is here, where Anakin and Ahsoka are charged with protecting the very children who, a few short years from now, Anakin will slaughter, arguably the first completely irredeemable act that will seal his loss of innocence and goodness forever (or at least until a fateful meeting with his son years in the future).

In keeping with this trilogy’s main thread–a plot by Palpatine to kidnap potential Jedi children–the first two episodes in particular explore both Ahsoka and Anakin in terms of their burgeoning adulthood, contrasted with their often immature traits. One of the most fascinating aspects of their relationship is that, while Anakin is the supposed adult and mentor, he often performs the same impulsive actions that he’s meant to be training Ahsoka out of, falling victim to the same lack of emotional balance he’s supposed to be teaching Ahsoka how to control, and so they’re often trading roles: sometimes Anakin is the mature one, and sometimes Ahsoka.

At the start of these episodes, Ahsoka gets in trouble with the Jedi Council for ignoring Anakin’s orders to retreat from the battle in which she is embroiled. She thinks she has the upper hand and doesn’t want to stop fighting, oblivious to the fact that though it looks like the droids are retreating, there are actually hundreds, if not thousands, more approaching. My only criticism regarding this scenario is that it does feel like it comes up a little too closely after “Storm Over Ryloth,” when disaster occurred when Ahsoka ignored Anakin’s orders. I would’ve thought she wouldn’t have been so quick to fall into these same habits so soon afterwards, but on the other hand much more time might have passed between these episodes than we saw on screen, and in real life, people don’t always learn their lessons so easily. They fall back onto old habits, despite their best efforts, and this situation is at least different from the last time, since in this case, she does at least seem to have the upper hand. Either way, she is punished by being taken off of active duty and made to work security in the Jedi library. 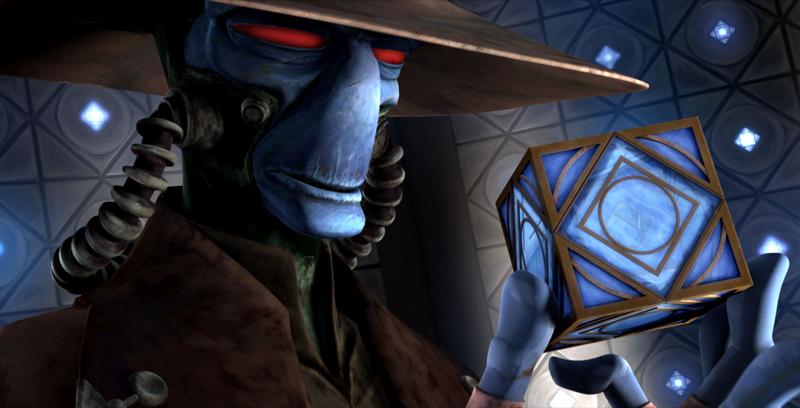 Meanwhile, Anakin, who takes responsibility for Ahsoka’s behavior, will behave not too dissimilarly himself in the next episode, when he ignores Admiral Yularen’s advice and charges onto the bounty hunter, Cad Bane’s, ship despite the danger, taking the walkers out into space–which they weren’t designed for–to launch a highly creative and perhaps extremely unwise attack. But despite the elaborateness of Anakin’s plans and their seeming genius, he ultimately underestimated Cad Bane, just as Ahsoka underestimated the droid army in the previous episode. Bane is one of the most shockingly competent villains we’ve seen on the show. Often in these sorts of stories, we as viewers grow complacent regarding certain villains’ abilities, and so do our heroes. We and they expect a bounty hunter to be not too bright and easily dispatchable. Bane, however, is not a bounty hunter to be trifled with. We watch him torture a Jedi to death (absolutely shocking for what is ostensibly a children’s cartoon) and then continue to get the upper hand again and again. Every time it seems like he is caught, he outwits and outmaneuvers our heroes, even turning off the gravity mid-fight to cause further disarray and confusion. In this second episode, he then lures Ahsoka after him–she again ignoring Anakin’s warnings–and traps her, and then gets the better of Anakin as well.

This scene is particularly rife with foreshadowing, because he gives Anakin the choice of either unlocking the holocron he has stolen and thus putting every child on the list of Force-potentials in danger, or watching helplessly as Ahsoka is sucked out of an airlock. Most Jedi other than Anakin would have likely made the extremely difficult choice of letting their Padawan go, in the interest of protecting so many innocent lives, and yet Anakin cannot. Although this isn’t nearly as direct a sacrifice of children as he will later perform in an ironic attempt to save Padme’s life in childbirth, he is exposing these children to danger and possibly death, in order to save someone he loves. As always with Anakin, the scenario is rife with irony, because on the one hand, it’s very difficult to fault someone for not allowing a loved one to die horribly and given his abilities, there was a good chance he could have subdued Bane immediately afterwards, but on the other, he didn’t know this for certain, and in fact, in the moment, he isn’t able to do so. Bane even later manages to sneak back onto Anakin’s own ship, in the uniform of a Republic Clone.