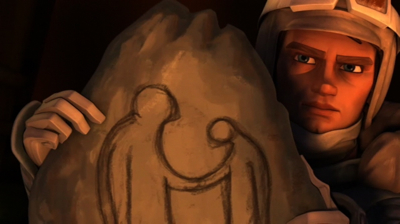 This gorgeous and deeply human standalone is another one of those flat-out brilliant episodes that instantly makes my list of favorites, alongside “Ambush” and the “Downfall of a Droid”/”Duel of the Droids” two-parter. In a tightly written twenty-minutes, it tells a devastating and beautiful story that comments on imperialism, war, and peace, providing an uplifting resolution to a situation that, throughout our world’s history, has so often ended in shattered lives and rivers of blood. In a show about war, particularly a war that our heroes think is meant to promote peace but is actually playing into the agenda of a masterly manipulative, secretive archenemy, it’s crucial to have an episode like this that stresses the psychological toll it takes on those who fight in them, the fact that wars are often created purposefully and unnecessarily by corrupt leaders who crave the violence due to their own warped mindsets, and the fact that the show’s end goal isn’t to glorify war but to speak out against it. Again, the Clone Wars seem to be a necessary evil to the Jedi in the moment, but underlying that is the truth that they were always both a smokescreen and a method by which Palpatine could further extend his power and world-dominating reach.

“Trespass” also works as a fascinating companion piece to the preceding Lurmen two-parter, each being a story about a seemingly primitive species who aren’t involved in the Clone Wars and have no interest in being so, but find themselves caught in the middle of the conflict, despite themselves. Whereas the Lurmen actively avoid violence, however, the Tal (another example of a species we saw only fleetingly in the films–this one in the Mos Eisley cantina–who get further fleshed out on the show) use it to defend themselves, attacking both the Republic and Separatist troops who intruded on their territory. Being a small, tribal society with no previous contact with outer civilization, they feared both sides and assaulted them for their own self-preservation. As Anakin and Obi-Wan come to discover, however, they aren’t a hostile race, just one willing to fight to protect themselves and even more willing to make peace. It’s a powerful statement about war that, to an outside observer like the Tal, it can be impossible to tell which side are the “good guys” and which are the “bad”. It’s also significant that, like the Ewoks, this seemingly undeveloped society is capable of holding its own against advanced technology, using its own hand-crafted weapons and battle smarts, proving from the get-go that Chairman Cho, who considers them nothing but mindless savages, is wrong, just as the original European settlers were wrong about the Native Americans. Just because a culture hasn’t reached a level of development that you have come to define as civilization by your own standards, doesn’t mean it isn’t civilized. As we see, they have language, writing, customs, and strategy.

They’re certainly more civilized than Cho himself who almost gleefully pursues war with the Tal. To him, they are nothing but animals to be subjugated on a planet that he considers himself to be the ruler of, despite the fact that the Tal were there long before him and his people arrived. Through Cho, The Clone Wars paints a desperately sad portrait of someone so militaristic and imperialist that, in a world currently full of tragedy and death, he doesn’t only not try to avoid more tragedy and death, but he seems to actively want to create it, for the simple self-aggrandizing pleasure of asserting his own authority. All deaths that occur after the Republic arrives in this episode can be laid on his shoulders, due to his refusal to approach the Tal from a peaceful perspective. Again, not everything can be easily labeled into black and white columns. Not all rulers of Republic planets are kind and benevolent. Some are petty and greedy, with a bloodlust not unlike Palpatine’s.

Again, it’s impossible to not see echoes of Western expansion in the United States and manifest destiny, but here, a long time ago, in a galaxy far, far away, a different decision is made. A young female senator who can’t help but call to mind Padme, except that she begins the episode meek and inexperienced, finally makes a stand, refuses to kowtow to her people’s corrupt ruler and forges a peace with these people, with the encouragement of the Jedi and the help of Threepio, whose usefulness in this situation as a translator neatly foreshadows his later dealings with the Ewoks. In a world full of darkness, death, and impending doom, the episode stands as a lovely ray of light, reminding us that even after the worst seems to befall, there will always be a new hope on the horizon.