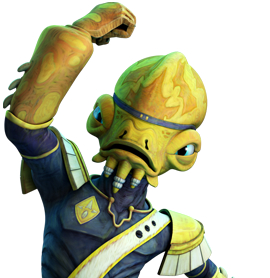 The three-parter that opens up Clone Wars‘ fourth season, composed of 4.1, “Water War,” 4.2, “Gungan Attack,” and 4.3, “Prisoners” is a fantastic reassertion of the series’ mission statement of providing emotionally realistic and stirring, action-packed wartime drama in a science-fiction/fantasy setting, while also resonating with and setting up elements of the Star Wars films that chronologically follow it. These episodes, set on the planet, Dac, in the underwater world of the Mon Calamari, stay true to Star Wars, both in demonstrating the savagery of the Dark Side and in giving an ultimately uplifting message about rebellion conquering evil, even in the most seemingly hopeless of situations–after all, even the impending Galactic Empire will eventually be brought down by a relatively small band of rebels. And just as the previous two arcs did, this one yet again grants us our first appearance of a much-loved character, this time around Ackbar, who is still only a Captain at this point rather than having the rank of Admiral, as he will have when uttering his immortal, “It’s a trap!” in Return of the Jedi.

In many ways, the situation on Dac recalls the problems on Naboo (particularly significant, given that the Gungans join the war in the second episode), except instead of the planet being divided by tensions between the land-dwellers and the Gungans underneath the water, both sides in this conflict are aquatic: one, the Mon Calamari, the other, the Quarren. After the assassination of the King, Kolina, who was Mon Calamari but a strong enough leader to form a tenuous peace between both peoples, the relations begin to break down. Kolina’s son, Lee-Char is considered too young, weak, ineffectual, and inexperienced to hold the kingdom together, and the Quarren’s doubts are being exacerbated by Riff Tamson, a shark-headed Separatist leader and puppet of Dooku who incites the Quarren to war with ultimate plans of taking over the entire kingdom himself by oppressing both sides, though clearly doomed (unbeknownst to him) to ultimately being ruled by Dooku/Palpatine himself, even if he does succeed. This brutal tyrant and bully is also later revealed to be Kolina’s assassin, his goal having always been to destabilize the government. 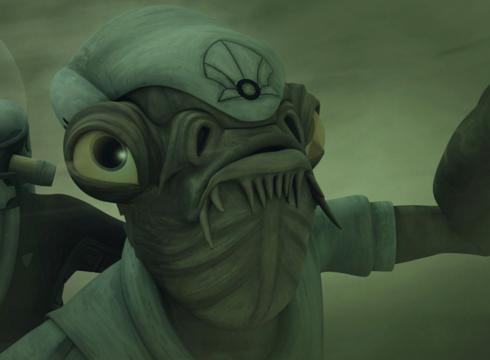 Although this isn’t the first arc to revolve around the Separatists attempting to exacerbate a planetary civil war (Mandalore being a prominent past example), the episodes are greatly distingushed by their environment. One of my favorite elements of Episode I has always been the beautiful, haunting imagery of the underwater Gungan city, and these are three full episodes set in a similar aquatic kingdom. I have always been captivated by Star Wars‘ ability to take its viewers to completely new worlds, thoroughly different from anything we experience in our day-to-day lives, and because of its epic scope and sheer number of episodes, The Clone Wars has always had the best opportunity in Star Wars‘ on-screen universe to take us to these dazzling new vistas, and it always takes advantage of it gloriously. Out of all of the worlds we have seen to date, though, this in many ways feels the most immersive and dangerous, because for the first time, our main heroes are completely out of their natural element, in a place where not only can they not breathe without aid but they can’t even move with the same dexterity as they do on land. They are all vulnerable both to attack and to the very atmosphere in a way that we’ve never seen before on the series, and it adds to the immediacy and suspense of the tale.

Lee-Char is also a fantastic character who develops immensely over the course of the trilogy from an inexperienced but committed young man to a true hero, who doesn’t let his lack of years on the throne nor the prompting of others to stay safe and hidden dissuade him from standing up for what he believes in and organizing a secret rebellion by sneaking into the prisons and appealing not only to his own people but to the Quarren who had begun to realize that they had been had by Tamson. It’s also extremely significant that he doesn’t simply rush in to fight but takes time to plan first, and he does so because of the wise words of Ahsoka, who has matured so much over the course of the series–taking the teachings of various Jedi Masters to heart, from Sinube to Plo to, yes, even Anakin, who can have trouble following his own words but has still taught her a great deal about fighting and surviving–it’s really astounding to behold. 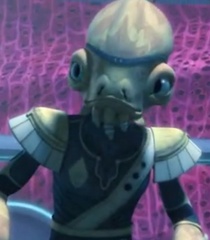 Again, it’s to the credit of the writers that Lee-Char–in a very short amount of time–seems to organically grow from a young boy into a young king before our eyes, bravely allowing himself to be caught by the enemy in the final episode in the hopes that his scheduled execution could galvanize the Quarren to join him in taking arms against the Separatists. And he finally vanquishes Tamson himself. In many ways, his story is a Hero’s Journey in microcosm, even reflecting Anakin’s in the sense that in order to run his kingdom, he has to learn to keep two separate factions balanced in harmony. He is also, of course, another iteration of the Star Wars series’ recurring theme of even the youngest, smallest or seemingly most insignificant among us having the potential for great things.