Despite how the deck is stacked against the good guys…or, well, basically everyone…what makes these episodes so powerful is how they highlight Padme’s heroism and argue that, despite the fact that we know that this is all ultimately headed to a very bad place–at least until Anakin and Padme’s children come of age and wrest control of the galaxy from the hands of the evil Empire–that there is still something enormously uplifting about small victories made against corruption. She may not win in the long term, but she manages to remain firm despite threats to her life, sway public opinion despite enormous odds, and even for just that one day strike a blow against Palpatine’s government–the first genuine setback we see Palpatine suffer on the series. Although “just” a young female Senator, she therefore manages something that no Jedi was able to–certainly not her husband (at least until the very end)–thus reasserting her stance as one of the greatest heroes of the Clone Wars.

And how does she make her argument and change peoples’ minds? She talks to her servant, one of the poor people of Naboo whose family has faced personal strife due to the war. Later, she describes to the Senate the horrible conditions into which the financial cutbacks caused as a result of over-spending on the war have forced regular citizens of the Republic: losses of electricity, education, food, etc. Padme is able to argue for why borrowing even more money will lead thousands (millions?) more into poverty, starvation and worse. For one brief, shining moment, as the Senate–much of which had disagreed with her before–stops, really listens to her, and loudly applauds, it feels like the series is granting us wish fulfillment for how we dream our government could be run–the senators ignoring partisanship in order to join together for a noble goal of protecting their people and enriching their lives. 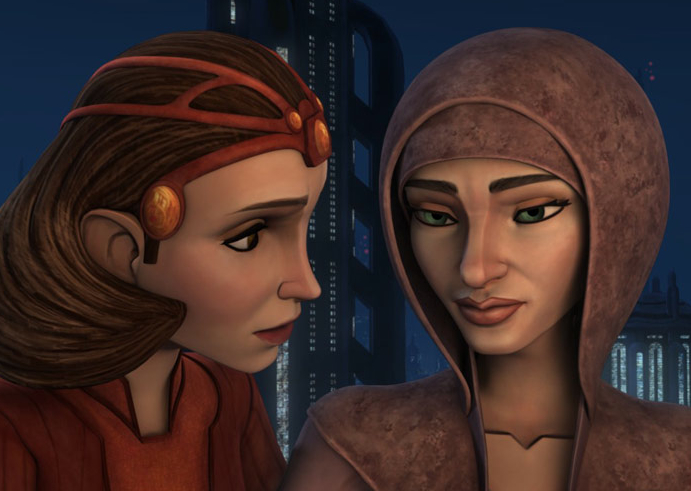 It feels similar to that rush you get when you watch The West Wing and catch a vicarious high from the members of the Bartlet administration trying to promote positive change in the world–which is tempered, of course, by the fact that this is just a brief, shining moment. At the end of this episode, Palpatine calmly deals with his setback and tells Mas Ameda that they must allow democracy to run its course (or at least seem to). Padme had stopped the expansion of the troops, and there’s nothing he can do about it. At the end of the next episode, when Padme fails to stop another, related bill whose defeat would have stopped the creation of more troops at all, Palpatine disingenuously consoles her with the same words, under the guise of commiseration. He may not have had the huge win he wanted in the previous episode, but at least his war continues on.

The third episode, “Senate Murders” also deals with potential Senate corruption, when Padme’s dear “uncle” Onaconda Farr is murdered, the second mentor/friend of hers to die in as many episodes. This time around, however, the twist at the end is that, although he was one of the very senators physically assaulted in the previous episode for refusing to back down on voting against the bill, he wasn’t assassinated for the same reasons and not by the same people. The culprit wasn’t the suspicious Banking Clan senator or the Kaminoan senator but actually Onaconda’s aide, Lolo, punishing him for getting their planet involved in the war in the first place, in “Bombad Jedi.” The irony is that Padme, who works tirelessly to uncover her uncle’s killer, is the one who he directly betrayed in that episode, and she was able to forgive him, whereas his closest assistant refused to do so. Therefore, rather than being killed for trying to stop the war, he’s killed for having joined it in the first place by a trusted friend–a fascinating precursor to Padme’s political loss at the end of the episode, again symbolically/thematically pointing to to another “friend,” Palpatine’s, treachery.

Meanwhile, the latter two episodes also continue to build Padme’s friendship with Bail Organa. He is one of Padme’s strongest supporters, and before he’s attacked and injured in “Pursuit of Peace,” he plans on giving a speech to rally the Senate to her cause. And in this episode, he works alongside her, going to dangerous meetings by dark of night with her, in order to help uncover Onoconda’s killer. One of my misgivings about the prequel films was that, when Bail Organa agreed to raise Padme’s daughter, we had never had the time to get a sense for him having any deeper connection to her other than that they were both senators, but this gradually developing arc narratively rectifies that situation. We get to see their joint mutual respect for each other and their status as allies, joining forces to combat the corruption in the Senate, not to mention further proof of what a fantastic, deeply respected politician that Organa is. Had I originally seen Episode III after having seen The Clone Wars (had that been a possibility on its release), there would have been no question in my mind as to where Leia got her bravery and political smarts–both her mother and adopted father are fiercely brave, brilliant politicians–nor why Organa volunteered to raise the daughter of such a dear friend and trusted associate.