[Note: The following post contains spoilers for the Star Wars: The Clone Wars episodes, “Storm Over Ryloth,” “Innocents of Ryloth,” and “Liberty on Ryloth”.] 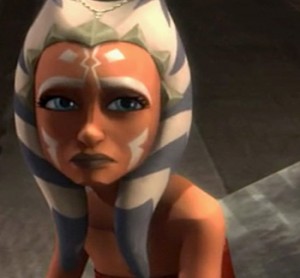 The triumphant first season of The Clone Wars basically culminates with a trilogy of episodes (1.19, “Storm Over Ryloth,” 1.20, “Innocents of Ryloth,” and 1.21, “Liberty on Ryloth”) surrounding the Republic’s campaign to free the suffering people of Ryloth from Separatist oppression–I say “basically,” because there is one more episode that follows it based on airing order, but when watching it chronologically (as far as the story goes), as I’m doing, that episode fits in amidst the early episodes of season 3. As with every other case I’ve encountered thus far, these installments greatly benefit from being viewed in chronological order. Viewing “Supply Lines” earlier set up the Twi’leks’ desperate situation, further explored in these episodes, and so when the Republic finally manages to free the people far later into the season, it helps convey just how difficult the blockade was to break, and feels like a huge relief to the viewers, along with the characters.

The first episode of the three, “Storm Over Ryloth,” was, for me, also the strongest, to a large degree because it centers on three of my favorite, related series threads: Anakin and Ahsoka’s relationship, Ahsoka’s development as a Jedi, and both of their often impulsive personalities. At the start of the episode, Ahsoka is nervous to be heading her first command role, but Anakin reassures her that she is ready. However, in a remarkable twist from what a plotline on a lesser show might do after the young prodigy is apprehensive about undertaking such a responsibility for the first time, it actually goes disastrously for her. Even after Admiral Yularen and Anakin order her to return with her men, when it’s clear the situation isn’t going in her favor, she ignores them and continues pressing forwards, due to overconfidence on her part, leading to the deaths of most of her squadron, as well as the Admiral himself being seriously injured.

Needless to say, Ahsoka isn’t only remorseful but deeply shaken by the experience, temporarily losing all confidence in herself. But what is most fascinating about the scene in which Anakin reprimands her for her behavior is that she challenges him for being hypocritical. After all, how many times have we and she seen Anakin blatantly disregard orders and have it turn out in his favor? She was simply following in her Master’s footsteps. While one could argue that Anakin has more experience than she does, there still certainly is a double standard here. 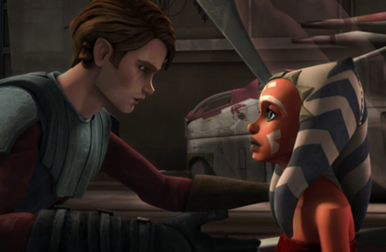 And it’s to Anakin’s credit as a person, as well as the good influence Ahsoka has on him herself, that he actually takes her words to heart, and shortly afterwards comes up with a plan tailor-made to his strengths as well as to helping restore Ahsoka’s confidence in herself. He tells her that she’s right that he often takes risks that put others in danger, and so instead, this time, he will only risk his own life. He orders the evacuation of their damaged ship, which he will then fly into the Separatists’ head battleship, leaving via escape pod at the last moment, and meanwhile relying upon Ahsoka to cover him, lead the attack on the other, scattered ships, and eventually retrieve his shuttle–a strategy that is very in-character for Anakin as it defies protocol as usual and brilliantly at that, in a way that simultaneously shows that he’s really listened to Ahsoka, and wants to prove himself to her in a way that also allows her to prove herself worthy to herself, as well.

And the extreme confidence he has in her–along with the encouragement of the admiral, who backs her completely once he awakens–eventually undermines her own doubts about herself, and the plan works marvelously, just in time for Obi-Wan to arrive and characteristically, humorously say that he doesn’t want to know what happened. As with most of the best installments of the series thus far, it’s an episode with truly stunning levels of character development, action, genuine pathos, a touch of humor, and ingenious plot twists, packed into a lean, mean 20 minutes in a way that never feels narratively squashed or rushed.

The other two episodes in the trilogy were both very good, but didn’t feel quite as narratively meaty to me, perhaps because they seemed more action-focused than some of the other preceding episodes, as well as centered more on side characters than leads. At the same time, that feels completely justified by the epic scope of depicting how the Republic frees an entire planet from oppression, and as usual, I appreciate that the show takes the time to peer into various characters’ perspectives, not just the major Star Wars players. And these episodes are loaded with wonderful, powerful aspects, the most prominent for “Innocents of Ryloth” being the tiny Twi’lek girl who had gotten lost when her parents were arrested and whom two Clones befriend along the way. The fear and loneliness of this child beautifully demonstrates the (for lack of a better word) human toll of war, powerfully personalizing the suffering of the Twi’leks, and while the clone, Waxer, wants to help her from the get-go, the evolution of his brother, Boil’s attitude towards her is truly lovely. Over a short period of time, he goes from racistly referring to the Twi’leks as “tailheads” and considering them weak nuisances, to warming to this little girl and realizing through her that civilians are the very things that he should be fighting for, not just the abstract concept of keeping peace. It’s also significant that this seemingly inconsequential little girl ends up being the one to lead them and Obi-Wan to the other captive Twi’leks. No one on this series is small or insignificant, despite their outer trappings.

Related to this, I love the moment where Waxer realizes that he should take off his helmet, in order to show the girl that he’s human and not a droid, because from the outside, their armor makes them looks very much like they could be. In fact, when I was a child, I thought the stormtroopers were droids, so this feels like a nice, meta commentary on the show’s part as to how they’re humanizing the seemingly inhuman Empire troops of the original series. 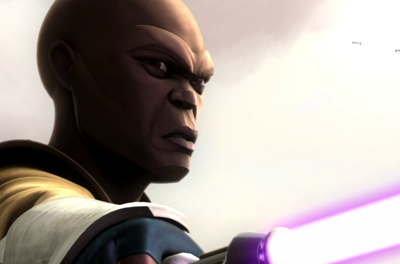 Then, we have “Liberty on Ryloth,” which is most significant for allowing us the most time with Jedi Master Mace Windu than any other filmed Star Wars story before it. I’d always considered Windu a rather cold man, although that was admittedly based on the very fleeting glimpses we’d had of him before, in basically each case acting extremely unbending when it came to either Anakin or any other sorts of orders. Here, however, we get a different perspective on the man. He is very kind and fair here, in all of his dealings with the Twi’leks. He himself comes up with the unorthodox notion of asking a Twi’lek rebel, Cham Syndulla, for aid (foreshadowing the future rebellion to free his own people, which he won’t live to join), and is very understanding of the man’s concerns. Actually being a resident of the planet, Syndulla has his peoples’ best interests at heart in a way that the planet’s senator–who seems to spend all of his time on Coruscant, out of touch with his people–does not. As in the past, the show implies here that the Republic isn’t perfect, that some of its members are bureaucratic and greedy, and that it is this very sort of behavior that eventually allows Palpatine to take control. But here and now, Windu makes the promise that after Ryloth is freed, the Republic won’t leave an occupation force on the planet, in the name of protecting it–a direct commentary on American military behavior.

Windu also gets points for pulling off one of the coolest uses of Force powers we’ve seen on the show, when the plasma bridge gives out underneath him, his clones, and the Separatist ship they were attacking, and in slow motion, we see him float the clones to safety while himself climbing/jumping up the falling ship, he and his men rising and drifting to safety. You’d think that Samuel L. Jackson playing him in the films would make Mace Windu as badass as he could possibly be on film. But no!