[Note: The following post contains spoilers for the Star Wars: The Clone Wars episodes, “Rookies,” “Downfall of a Droid,” and “Duel of the Droids”.] 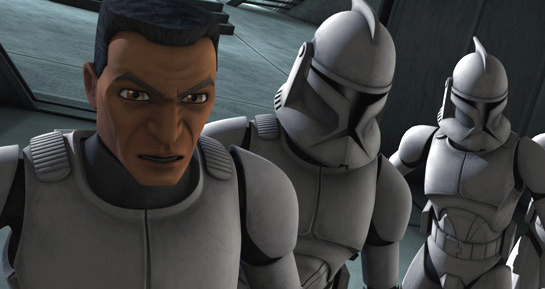 Yet another Clones-centric episode, this installment follows up on the characters from “Clone Cadets,” which focused on the seemingly flawed yet actually extremely heroic Domino Squad, and whereas that was an outwardly uplifting episode with a subtextually bittersweet edge, springing from its juxtaposition of the clone, Hevy, and his team’s optimistic view of the future with our knowledge of what the clone troops will actually be used for by Palpatine one day, this one is more obviously sad due to the death of a character we came to love in the previous clone episode, while at the same time, Hevy’s sacrifice is uplifting. With his last brave act, he foils Grievous’ plans to destroy Kamino, thus in the act of dying, protecting the very brotherhood he was so deeply proud to be a part of, pursuing a cause that he had strived so hard for the right to fight for in the first place.

One of this series’ greatest accomplishments thus far is in how it has asserted the individual personhoods of the eponymous clones. Shortly after watching this episode, my partner said that, after this show, he’d never be able to look at Imperial stormtroopers the same way again, and while those later soldiers will be fighting to uphold an evil Empire whereas at this point, these soldiers believe that they are helping a democracy, there is a connection in that, in the original Star Wars films, we never saw the stormtroopers without their helmets on, and in the prequels, although we did see the non-uniformed clones on Kamino, once the troops arrived on Geonosis at the end of Episode II and onwards throughout Episode III, the helmets remained on, as well, making them, effectively a faceless, inhuman mass. We don’t think of stormtroopers as people but more as machines. When the rebels kill them, their deaths don’t register, because they are simply weapons. And the same was true of the clones, both before and after we saw them with their suits on, as even before their identical faces made them seem to be more like mindless drones than truly sentient beings. This show, however, boldly refuses to allow the viewer to disregard the clones’ morality or mortality. Palpatine may consider them his property, but most of the Jedi we encounter do not, and this episode shows how a clone can be a hero on his own terms, and due to his own decisions. Hevy stays behind to set off the detonator, despite his brothers there warning him to leave, because he knows he can save millions more of them if he stays.

This episode also made me glad once again that I’ve decided to watch the series in chronological order, rather than in the order the episodes originally aired, because without “Clone Cadets”‘ initial introduction to the fallen characters, Hevy and Cut-Up, I can’t imagine this episode having been nearly as powerful. Cut-Up’s death is so sudden and senseless that the fact that he is a clone that we have known previously makes it not just a random killing but personal. There is such a sense of tragedy to the fact that two of the major members of this ragtag squadron, who had proven themselves to hold such promise for the future, should die so relatively soon after having set out on their grand adventure. But again, as previously stated, the second death, in particular, is at least at Hevy’s own hands and in pursuit of the noblest of goals.

This otherwise dramatic episode also features some fun bits of comedy, via the battle droid masquerading as a clone, who the others identify as a fake due to his herky-jerky gesticulations and his “Roger Roger,” which is itself followed by the exceedingly clever bit wherein Rex then pretends to be a droid to get into the base. Speaking of Rex, I also particularly love that after the last episode in which he was featured had him facing up against a spy amongst his rank of brothers, that this one allows him to come in contact with a clone that represented the best of them.