But what is even more impressive about him as a person might be that he is willing to hear Rex out and eventually accept his perspective, too–that, for Rex, fighting alongside his brothers in order to protect the galaxy from evil is immensely rewarding, on a personal level. The two men learn from each other. Never before have Clones’ separate personhoods been quite this apparent.

The final battle, in which Cut’s children accidentally awaken a ship of droids that proceed to attack their home, is the most nailbiting sequence I’ve seen on this series. In an extremely short amount of time, Clone Wars had inspired me to care deeply for Cut, and given the fact that the show doesn’t shy away from death, I was extremely worried that Cut would die protecting his family, thus proving his bravery to Rex and giving Rex something to mull over for himself. Happily, however, this isn’t the case. The episode ends on an uplifting note, with the by-the-books Rex agreeing to not report Cut, and the knowledge that, despite what will happen with the Clones a few years down the line, there will be at least one out there who laid down his weapons and instead decided to focus on fostering life and love for a new generation. 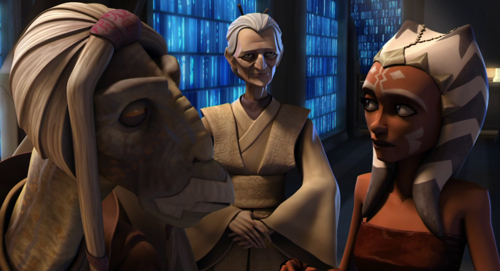 That powerhouse two-parter is followed up by a standalone episode that might seem like a light jaunt–or perhaps lightsaber jaunt is more accurate–in which Ahsoka attempts to track down her weapon after it’s stolen by a petty criminal, but it is also a very solid, entertaining, and character-driven episode. In order to retrieve her sword, she enlists the help of Jedi Master Tera Sinube, a kindhearted, old man who, not unlike Yoda, masks a keen intellect and formidable powers underneath his seemingly frail exterior. After he points her in the right direction–Sinube is an expert on Coruscant’s criminal underworld–he then insists on tagging along, to her frustration but, just as with Luke’s first introduction to Yoda on that swamp planet in the Dagobah system, his wisdom proves extremely helpful to her, particularly when he not only teaches her to be patient (the old Jedi credo) in the abstract but also a practical use for it–that slowing down and stilling her mind can keep her anxiety from drowning out the sense of anxiety she could otherwise be perceiving off the person she’s pursuing, not to mention those moments where she runs and runs and runs, and he ends up at the destination first. Sinube’s a great character who I hope to see again, along with his lightsaber walking staff.

The episode ends on a lovely moment in which they encounter Yoda himself in the Jedi Temple, and she teaches a group of Younglings the lessons she learned–a moment that can’t also help but have bittersweet resonances, given the future.