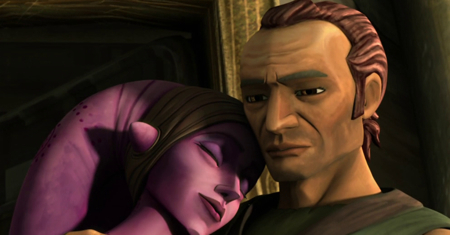 The first episode in this pair is a highly charged action spectacular detailing a rescue mission on the part of Obi-Wan, Anakin, and Jedi Master Adi Gallia to rescue Master Eeth Koth from the clutches of General Grievous, which–after a long gap since his last appearance–reasserts both Grievous’ supreme evil and formidable abilities as well as his cunning. At the start, we see him overcome an extremely skilled Jedi, although there is also a level of cheating to his win, given that not only is he fighting with four lightsabers against one, but his droids are attacking Koth from behind with electrical charges. But throughout each of the battles, he displays a frustrating ability to always get the upper hand, even when it seems he’s cornered or defeated, and to always escape, crawling away like an insect.

Furthermore, although Koth believes that his hand signals to the other Jedi to alert them to where he is go unnoticed by Grievous, Grievous actually lays a trap to catch them when they arrive. Not that he is wholly successful. In fact, Obi-Wan again proves to be a formidable opponent–foreshadowing the fact that in Episode III, Obi-Wan will finally be the one to finish Grievous off–and when Grievous orders his droids to blow up the Republic ship, his fleeing vessel gets karmically caught in the crossfire, as well, and he ends up having to crash land on the nearby planet. In the next episode, while on that planet, Grievous will work many of his droids literally to death, completely callous to their inability to function without power, and still manage to get away, which again reasserts his cruelty (in casually damaging other creatures that are made up of very similar parts as he is) and tenacity. While fighting him in “Grievous Intrigue,” Obi-Wan tells him that he has no real power, but simply an army full of soldiers with no real will, who have simply been programmed to follow him, but the truly despicable Grievous seems fine with that. To him, as Cersei Lannister on Game of Thrones asserts, “Power is power.” It doesn’t really matter how he has gotten it or in what form, as long as he can use it to fight the Republic and Jedi.

What is ironic about that is that Palpatine similarly considers his army of clones to be a mindless force, completely bent to his will, and in the end, it seems that that is what they sadly become, but at this point, that isn’t the case, as explored in the truly beautiful episode, “The Deserter,” in which Rex is wounded and finds himself healing on the farm of a man who turns out to have been a Clone who deserted after the first Battle of Geonosis and is now married and raising his two young children. This episode works as a perfect counterpoint to “The Hidden Enemy,” in which Rex encountered Slick, a Clone traitor working with the Separatists as a form of protest against the servitude he feels he and his brothers have been forced into by the Republic. This time around, he is brought face to face with someone he initially considers a traitor to his brothers, as well, and yet over the course of his time with him, he learns to respect him.

This Clone, Cut, isn’t as radical as Slick. He has no interest in actively working with the enemies to undermine the Republic. After experiencing the horrors of war firsthand, he simply wants to leave that life behind all together. From his perspective, his Clone brothers were all indoctrinated from birth into a violent way of life that is ultimately meaningless, fighting in a war that they don’t really understand, just like the Separatist droids–and it is one of the episode’s brilliant dramatic ironies that neither he nor Rex realizes just how accurate that really is–and he wants to create life, instead, in the form of his children and the crops he now tends.