For now, however, what makes Ahsoka such a fascinating companion for Anakin is how similar to him she is. She is also extremely gifted, and perhaps too smart for her own good. She also has difficulty taking orders and a propensity for diving into a dangerous situation without careful forward planning. She’s also often right. And what makes this so interesting is that this puts Anakin in the same situation that Obi-Wan has often been in over the past 10 years, being irritated by his younger apprentice’s refusal to listen to him–which will likely lead to Anakin empathizing further with his former Master and perhaps even understanding him in a way he never could before–while at the same time, Anakin seems to be swiftly realizing just how much he and Ahsoka actually have in common, how they are both phenomenally talented and that just like him, underneath her sometimes-arrogant exterior, she truly does want to learn and to be the best Jedi she can, which leads to him bonding with her far more comfortably than Obi-Wan ever could with him. Because they are so very much alike and Anakin is still at a point in his life where, while he has done some very dark things–indirectly referenced when he refuses to talk to Ahsoka about what happened the last time he was on Tattooine–he is also still striving to become someone that would make Obi-Wan and his deceased mother, Shmi, proud. Incidentally, it’s also refreshing to have such a prominent female warrior in the Star Wars ‘verse. Up to this point, there haven’t been a lot of them. Incidentally, the Dark Side also gets a strong woman, in the shape of Dooku’s assassin, Ventress, and, in her appearance in the Clone Wars film, Padme has all of the strength, smarts, bravery, and ability to take care of herself as she exhibits in the first two prequel films.

Furthermore, I love the series’ animation, which is some of the more gorgeous CGI I’ve seen, using a stylized, often angular approach to the character faces, but one which also allows for a great deal of human expressiveness on them, along with extremely detailed backgrounds and sets. These first few episodes have such great visual continuity with the other Star Wars films that they truly feel part of the same universe, not only as far as the characters and elements of the world represented but also in the very way it’s “shot” and edited, featuring the classic “wipe” scene transitions of the Star Wars films, as well as certain classic, recurring shots and camera angles that make it easy to forget that you’re not watching another official film in the series. 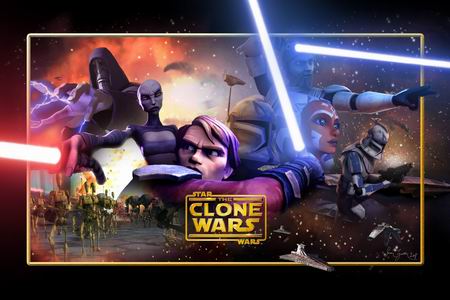 For someone who has adored the Star Wars films practically his whole life but who never really engaged much with the novels and other add-on material, watching The Clone Wars feels akin to getting new chapters in the series, and ones that I suspect could develop into something equal-ranging-to-even-better than many of the films that spawned them. Each of the two regular-length episodes felt as visually dynamic and action-packed as a feature film, while still making time for arguably better character development than the films, and already better acting. The episodes are also full of wonderful touches, such as recycled phrases from and references to the films, which speak to the amount of echoed, recurring motifs that occur throughout the Star Wars series (Paul wrote another great essay on that here.)

And the three chapters continue to add scope and depth to the Star Wars universe, the second, “The Hidden Enemy,” interesting in particular for how it allows us, for the first time, to begin to see the clones not as a single, unified force but as distinct personalities–personalities that, yes, have been bred to be overall compliant but who do still have distinct traits from one another. The episode is also loaded with dramatic irony: the “traitor” clone who aids the enemy because he feels that he and his brothers are being treated as slaves by the Jedi might be sabotaging our heroes, but at the same time, we as viewers can (a) sense that there is something wrong to these men having been mass-produced just to be a subservient army, and (b) know that these men, currently fighting alongside the Jedi, will one day be ordered by their ruler to betray and destroy them.

Meanwhile, the film–which got horrendously bad reviews when it came out, but which I think suffered more from a very vocal public’s dissatisfaction with the prequels than based on anything it itself did–demonstrates more of Palpatine’s brilliant political intrigue, this time having Dooku kidnap Jabba the Hutt’s son and frame the Jedi, in the hopes that Jabba would ultimately join the Separatists. Even this description is a bit of a simplification, however, of his elaborate machinations. He has plans within plans within plans, using his own men as pawns that he will later sacrifice when it suits him, and this film gives us a further taste of how he plays every side against each other, and even has contingencies in place that allow him to succeed, whatever the outcome.

I eagerly look forward to more Clone Wars and plan, for now, to continue documenting my journey. Thanks for reading, and may the Force be with you!