Which brings me–finally, you might be thinking!–to The Clone Wars, which I was excited to watch, because among some of my more prominent prequel disappointments was the fact that, besides showing the beginning and the end of the Clone Wars, they basically skipped over one of the most tantalizing pieces of Star Wars history. At the same time, unlike many prequel viewers seem to be, I’m forgiving of the fact that there is only so much time in three just-over-two-hour films and that Anakin’s arc had to be given greater prominence than anything else. Unlike the original trilogy, which occurs over a fairly compressed period of time, the prequels stretch over 13 years of plot, and so a large number of gaps in time and, in some cases, character and world development was necessary. A television series, on the other hand, has the time to spare and to breathe, and is thus able to delve into character arcs, and worldbuilding that three films can’t accommodate.

Over the course of the past day, I watched the first three chronological chapters in The Clone Wars saga, which are, in order, episodes 2.16, “Cat and Mouse,” 1.16, “The Hidden Enemy,” and the theatrically-released film (the series would often bounce around the timeline of the Clone Wars, and the show’s producers only recently put out a definitive list of their proper order; I decided to watch the story unfold as it would have for the characters), and I’m happy to report that, right off the bat, I am enjoying them immensely. The show already seems to be a perfect companion piece to both trilogies, paying honor and the greatest respect to the films (both the older ones and the newer) as well as to other elements of Star Wars‘ Extended Universe from its tie-in novels, graphic novels, video games, RPGs, etc., while also, in the case of the prequel films, supplementing them, fleshing them out further, and providing greater support to their narrative structure. In other words, it doesn’t alienate fans of the prequels by disregarding or rewriting them, while at the same time it provides many of the elements that the prequel haters felt were missing from those films, and so in many ways, executive producer, Dave Filoni’s, greatest achievement here seems to be in striking a balance between those two sorts of fans–it really does feel like the best of both worlds. 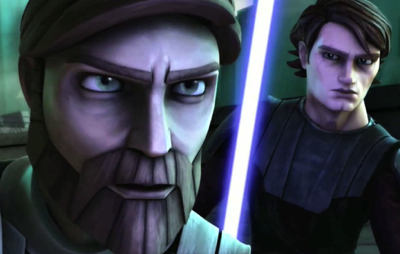 First and foremost (and perhaps, most importantly), Matt Lanter, the voice of Anakin Skywalker in this series, is a much better actor than Hayden Christensen, instantly feeling more at home with the character and the world. While Christensen’s Anakin often felt overly whiny, irritatingly impetuous, and simultaneously stilted, Lanter’s is cocky and confident, damaged, yes, but also with a sense of humor that is most often brought out when interacting with Obi-Wan, whose voice actor, James Arnold Taylor, does an almost shockingly excellent recreation and extension of Ewan McGregor’s performance, making it easy to fall under the illusion that McGregor never left. Like McGregor, his Obi-Wan has a dry wit and sense of eternal amusement, always bubbling beneath the surface.

Some of my favorite bits of the prequel trilogy were comprised of the banter between Anakin and Obi-Wan, which appeared all too fleetingly. Their relationship is a fascinating one, being simultaneously a father-son bond, as well as a brotherly one. The films tend to favor the former, with Anakin often coming across as the bratty kid disobeying his father’s orders. For quick flashes, however, if we pay very close attention to their sniping at each other, we can almost see just why Obi-Wan referred to Anakin as a “good friend” of his in the original trilogy–because there is love underneath it, love that was often obscured by Anakin’s attitude, and love that is much more immediately apparent, even in just the three installments of The Clone Wars that I’ve seen thus far. This is largely because, when Obi-Wan and Anakin squabble, we see that Anakin’s impulses are often correct, and Obi-Wan will begrudgingly admit to this–and other times, Anakin, will even begrudgingly admit that Obi-Wan was right–and often with a sense of humor about it on both sides, which makes the relationship seem much less one-sided. They argue with each other like family but they also love each other like family, which makes what is going to happen to them a few years down the line even more difficult to take.

Further, in its theatrical film, the show takes the huge, bold leap of giving Anakin his own apprentice, Ahsoka, a youngling who, on the surface, seems not yet old enough to take on the challenge of becoming a Jedi knight-in-training but who Yoda assigns to Anakin, who hadn’t requested a Padawan and who isn’t even yet a Master himself–a breach in protocol, yes, but one which speaks to the Jedi Council’s continued uneasy relationship with Anakin. They still clearly don’t fully trust him, constantly wary of his fear and anger (this breach between them will, of course, only grow worse), and yet, Yoda is also aware that Qui-Gonn may very well have been right in believing him to be the prophesied One to bring balance to the Force. And in granting him a Padawan, Yoda is continuing to test Anakin further, likely to see how he would fare as a Master before granting him the title. 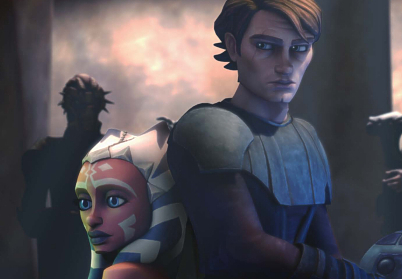 Futhermore, Yoda privately tells Obi-Wan that part of the lesson will be to see if Anakin is capable of letting go of Ahsoka when her training is done. This is one of the moments that underlined for me that the Star Wars saga is in very good hands here. A while back, my brilliant friend, Paul F. McDonald (author of the upcoming book, The Star Wars Heresies: Interpreting the Themes, Symbols, and Philosophies of Episodes I, II and III) wrote a fantastic essay called “Deconstructing Vader,” which argued that the great tragedy of Anakin Skywalker’s life was his inability to let go of the past, of his anger, of his fear of change, of his selfish desires. It’s what drove his bloody massacre of the Sandpeople in Episode II. It’s what drove his wish to “stop people from dying.” It’s what drove his eventual turn to the Dark Side, which occurred as the result of him trying to save Padme’s life, which ironically doomed her. And so on the one hand, Yoda’s perceptiveness shows a remarkable consistency between this show and the films in how the Jedi Council handle and regard Anakin, while on the other, it gives the tantalizing indication that his upcoming relationship with his new Padawan might even partially contribute to driving him to his decisions in Revenge of the Sith. The fact that he takes on a Padawan who starts out so young also bears tragic resonance for the fact that, three years from now, he will singlehandedly slaughter all of the younglings in the Jedi temple.