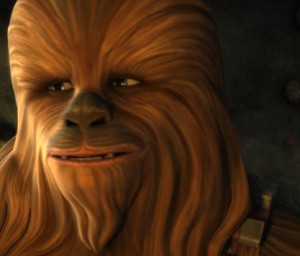 I have to admit that I was a bit worried at the start of this two-parter, which closes off Season 3 (3.21, “Padawan Lost” and 3.22, “Wookiee Hunt”), because I don’t tend to be a huge fan of the “Most Dangerous Game” plot that most sci-fi shows tackle at some point, in which a villainous alien race captures our heroes and sets them inside some sort of obstacle course, hunting them for sport. I retained an open mind, however, because Clone Wars has never truly let me down in the past–not every episode has been perfect, but none have been complete washes–and once again, the show surprised me, using this well-worn plot both to explore how far Ashoka has come as Jedi and a person, as well as to, in the second episode, introduce one of Star Wars‘ most loved characters into the saga–the very last thing I’d expected from the initial premise.

As with basically every time a female character gets captured on the show, when Ahsoka is kidnapped here and brought to an isolated planet to fight for her life, she doesn’t wait around to be rescued. In fact, Anakin and the other Jedi have to give up the search, as there are no signs of her anywhere. Instead, she herself has to be the one to stand up and fight, inspiring others to join with her, as well as to make new allies who help her, as well. Shortly after being dropped into the forest, she falls in with a number of other Jedi younglings, all of whom had been there for a long time. The reason the Tradoshans had grabbed her is that they aren’t able to overpower full-grown Jedi in their hunt, yet younglings give them enough of a challenge while still being untrained in their powers and thus much easier to kill, and they hadn’t realized that, despite her youthful age, Ahsoka is already a highly skilled Padawan. 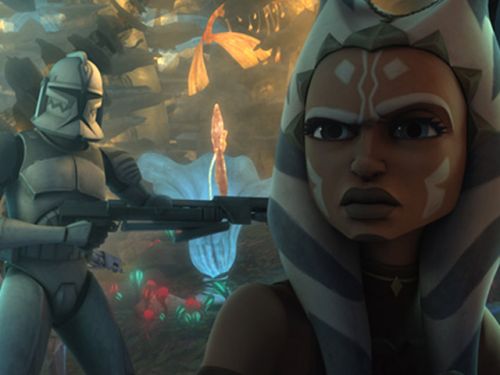 And although the other kids, led by a girl named Kalifa, try to teach her how to hide and evade capture, she tells them that it’s absolutely crucial that they fight, rather than spending their lives running. The show’s economy of writing is always extremely impressive, but here it struck me much more than other times how incredible it is that the writers manage to establish this group of kids, and even put them initially at cross purposes with Ahsoka and yet over the course of probably only 15 minutes or so of screen time, give their relationship a fully developed arc. We believe these kids’ fears and reticence to embrace Ahsoka’s words, and we also believe them when they gradually come around, without the emotions ever feeling rushed, forced, or underdeveloped.

There’s an extremely powerful moment in which Kalifa, finally deciding to come to Ahsoka’s aid in fighting a Tradoshan, begins to Force choke him. After all of this time, all of her anger and fear finally erupts, and while she’s doing it in service of saving someone’s life, Ahsoka begs her to stop. Much as Obi-Wan said to Anakin in the previous episode, if you succeed in a fight by giving up your principles and honor, you’ll suffer a far greater loss than had the enemy simply won. In many ways, Ahsoka understands the Jedi Code in ways that Anakin does not. And Kalifa obeys her. Sadly, however, she does end up being killed shortly thereafter by another hunter’s blaster but doesn’t blame Ahsoka for forcing her out of hiding but rather, with her last breaths, thanks Ahsoka for what she has done, asking her to look after the other kids, which she agrees to do. Again, Clone Wars refuses to pull its punches. Even an ultimate victory often comes at great cost and loss.

Meanwhile, as a direct contrast to how well Ahsoka is handling her tough situation, we return to Anakin, who is distraught over having lost Ahsoka, as ever finding himself incapable of letting go. Then, Master Plo comes to speak to him in what might very well be my favorite scene of its type to date. Because it seems like it’s about to go one way but then surprisingly shifts to an even better place. I had expected Plo to give Anakin the old talk about the need for a Jedi to accept a loss and move on from it rather than allowing oneself to be consumed by regret and remorse. But instead, he doesn’t do that. Plo knows that Anakin won’t respond well to that, and so instead very kindly and wisely tells him that halting the search doesn’t actually mean giving up on Ahsoka, and that if Anakin had trained her well, she would be able to use that training and take care of herself. He basically tells Anakin to have faith in her that she will make her way back to him, which is the best thing anyone could have possibly said to him, and far better tailored to him than he likely would have gotten from Obi-Wan or most other Jedi.

It is extremely touching then that, in the end, Ahsoka also tells Anakin not to blame himself for what happened and that without him, she wouldn’t have survived, since his training is all she had. The final shot is both heartwarming and laced with dramatic irony, since Yoda watches on, having heard Ahsoka’s words to Anakin, full of hope that he had made the right decision in pairing them and that Anakin is indeed now on the right path, and yet we know, sadly, that this won’t turn out the way that anyone hopes. Similarly, Ahsoka helped save those Younglings from being killed on that planet only for them to be in line to likely be wiped out by Order 66 (or possibly by Anakin himself) in the not-too-distant future. 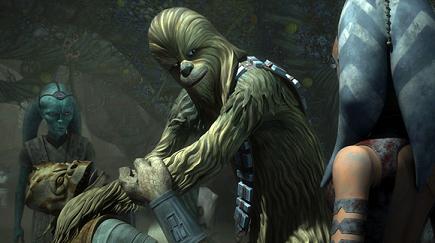 And then there is also, of course, the most exciting development in the episode, which is the appearance of Chewbacca, who the Tradoshans had captured as their latest prey and is freed by Ahsoka and the others. Ahsoka soon makes friends with the big guy, and it’s not long before he’s using his fantastic skills with electronics to create a communications device to call his Wookiee friends to the planet to rescue them, his friends eventually arriving only after they had kicked a great deal of ass themselves. Much as when we hear Anthony Daniels voicing Threepio on this show, hearing Peter Mayhew’s voice as Chewie here made me feel so warm and nostalgic. I love that they got him to do this, because while, yes, they are just sounds that someone else likely could have done, there is something about having the real deal that makes it feel right in a way it wouldn’t have otherwise. And the animation is so perfect that it’s easy to temporarily forget that that isn’t Mayhew standing there in his big, hairy costume. His performance is flawless, slipping back into the character as if he’d never left. I love that the show is taking the time not only to fill in the answers to the big questions left unanswered in the prequels but also the more minor gaps, here explaining how the Jedi come to form a friendship with the Wookiees and Chewie in particular, since we see them and him in Episode III but not prior to that. I also love that Ahsoka is the first main character in the Star Wars saga to meet Chewie–chronologically speaking, at least.

A taut and superb conclusion to Season 3!