[Note: The following post contains spoilers for the Star Wars: The Clone Wars episodes, “Secret Weapons,” “A Sunny Day in the Void,” “Missing in Action,” “Point of No Return,” “Revival,” “Eminence,” “Shades of Reason,” and “The Lawless”.] 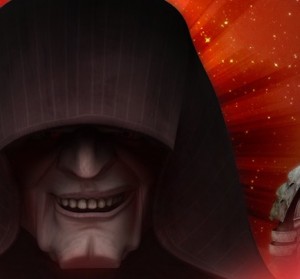 Although when I began doing these series of posts, I committed to doing a post on every arc of Star Wars: The Clone Wars, I will unfortunately have to break that promise when it comes to the Droids arc in Season 5, because as much as I tried to come up with anything to say about it, there just isn’t enough to justify an entire post, much as there isn’t really enough plot in those installments to have justified a four-episode arc. I like the idea of an episode focused on a ragtag team of droids, headed by the tiny Colonel Meebur Gascon, but stretched across four episodes, it at times felt nearly interminable. And it’s a particular shame, given that season 5 ended up becoming The Clone Wars‘ unintentional final season that so much time was taken up by such a thin story.

There are some nice bits, particularly the element surrounding the clone with amnesia, as well as Gascon’s relationship with the droids, which gradually develops from snide condescension to mutual respect, but the idea of droids and other small, seemingly insignificant creatures in the Star Wars universe proving themselves to be brave and heroic isn’t new, and since most of what these episodes have to offer revolves around that concept, this arc never feels more than a passing diversion, and around 80 minutes of screen time is far too long for a passing diversion.

On the opposite end of the spectrum, the Darth Maul arc that makes up the next batch of four episodes is one of the series’ best. In a relatively brief amount of screen time, Maul positions himself as a serious threat to the fate of the galaxy, as well as to Palpatine’s plans, and as with the series’ best episodes, he does so in a way that–although a great deal happens in a relatively brief time span–feels completely organic and non-rushed. The Clone Wars is capable of packing more plot into any random 5 minutes than some series achieve over multiple episodes, and doing so in a way that feels completely developed.

Over a smattering of mere minutes, Maul enacts quite complex plans which prove him to be an even more formidable and brilliant enemy than we ever realized in The Phantom Menace, in which he had little time to do much more than look imposing. Although we might have realized that there must be more to a Sith Lord than simply being a great fighter–he requires sizable brains, as well; just look at Palpatine and Sidious–we never saw much more from Maul than his anger and rage in the film. Even in his previous appearances on The Clone Wars, he was primarily defined by these attributes, having been found a mentally shattered wreck of his former self. This arc, however, finally shows us a Darth Maul in full control of his faculties and, in many ways, more dangerous than ever before, as he no longer has to follow Sidious’ rules. He’s a free agent and one who has his own aspirations for world domination.

And what is so extremely clever about his plans is that they achieve all of his ends at once. He manages to build a strong power base of enemies of the Republic that at the same time is specifically targeted to finally having his ultimate revenge on Ben Kenobi. He does so by allying with Death Watch–whose recurring arc finally reaches a head in these episodes–promising them help in finally overthrowing Satine and taking over Mandalore, but his actual goal being to betray them and rule Mandalore himself. This also has the added benefit of luring Kenobi to him, since Satine is the woman who Obi-Wan has loved all of these years, and he now has her imprisoned.

It would take far too long to go over every single plot twist, but this arc quite elegantly manages to dovetail two disparate threads (even Satine’s nephew who had helped Ahsoka expose corruption in the Mandalorian government makes another appearance to help his aunt) and in a manner that highlights the brilliance of the villain. What’s also intriguing is how Death Watch and Maul’s machinations to win public support mirror what Palpatine did on a larger scale with the Clone Wars, with the villain effectively creating a false enemy in order to rally the people to their cause.

Satine’s death is deeply tragic and yet another powerful reminder of Maul’s heartless vindictiveness, as well another one of those moments you simply don’t expect of an animated series with a family audience. In retrospect, it makes sense that Satine would have to die. After all, despite Obi-Wan being a Jedi, I can’t imagine him having gone into hiding without Satine after Order 66 was carried out. I can’t think of either a compelling reason that he would stay away from her or that she would reject him under those dire circumstances, particularly since with Palpatine in power, she would probably be in just as great danger, being a strong-willed person who would refuse to submit to the new Emperor.