[Note: The following post contains spoilers for the Star Wars: The Clone Wars episodes, “The Mandalore Plot,” “Voyage of Temptation,” and “Duchess of Mandalore”.] 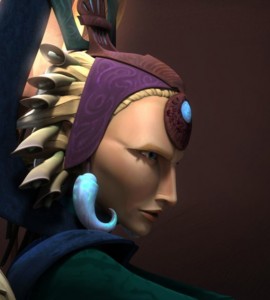 The superb Mandalore trilogy–eps 2.12-2.14, “The Mandalore Plot,” “Voyage of Temptation,” and “Duchess of Mandalore”–combines all of the things that Clone Wars does best: in-depth character drama, stunning revelations, taut suspense, horrifying and imaginative monsters, complex political intrigue, creative use of film continuity, and resonant dramatic irony, its two salient points being its further exposure of the corruption at the heart of the Republic and its digging deeper into the character of Obi-Wan Kenobi than perhaps ever before on Star Wars (or at least speaking of the filmed properties).

Although Obi-Wan is one of the most known and beloved characters in all of Star Wars, a great deal of his charm, as well as one of his primary character traits, is his inscrutability. His ever-present dry humor is such a defining trait that it can be difficult to tell his actual feelings regarding a matter. Because of that, he can often seem like the perfect Jedi knight–calm, cool, his emotions almost always perfectly in check. One thing we might never have considered is the possibility that Obi-Wan ever could have had a romantic past, nor that he ever could have fallen for a woman so deeply that, had she asked him to leave the Jedi order for her, he would have agreed. And yet that is exactly what is revealed in these episodes, adding another brilliant layer to one of popular science-fiction’s most famous characters. 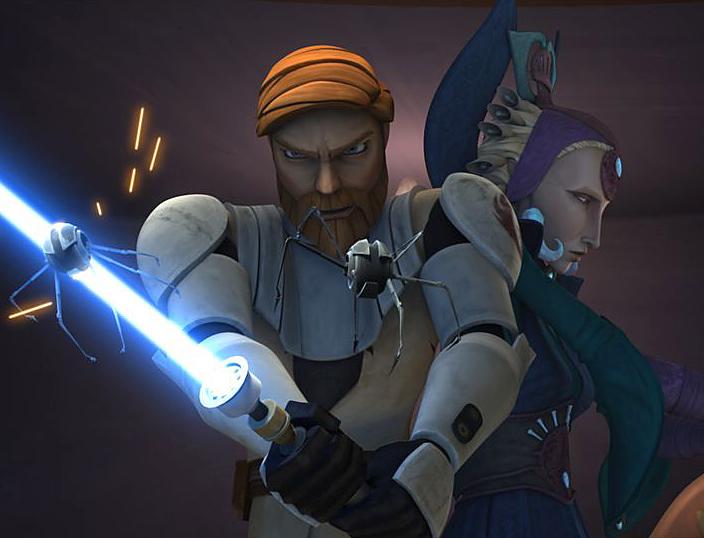 One particularly telling aspect regarding his passionate feelings for the Duchess Satine of Mandalore is that, although he initially responds to her jibes with his typically good-natured, ironic comments, it isn’t long before he seems to be genuinely losing his temper with her, his responses growing gradually more biting until they finally burst into outright anger. Now, being Obi-Wan, that doesn’t mean he throws a tantrum, but we do see helpless frustration from him that even Anakin isn’t capable of provoking. And what is so wonderful about that is the new ripple it puts into Anakin and his regular dynamic. In the second episode, as he and his Padawan are escorting Satine to Coruscant, their relationship flips for perhaps the first time: now, Obi-Wan is the one behaving emotionally, being deeply affected by his hopeless love for a woman he can never be with without altering the course of his entire life and disregarding the philosophies and teachings he’s been trying to uphold since childhood, and Anakin is the controlled one in the more paternal/big-brotherly role of giving Obi-Wan advice and lightly joshing him about the matter. There’s one lovely little moment at the end of “Voyage of Temptation,” in which Anakin affectionally and casually pats Obi-Wan’s shoulder that speaks volumes about how deep their friendship is–both despite and because of their difficulties with each other, which again underlines the tragedy of what will happen to them in Episode III.

Another thing that Obi-Wan and Anakin prove to have in common is their taste in women. Satine is highly and deliberately reminiscent of Padme. As Padme was when Anakin first met her, Satine is the ruler of a kingdom (actually a conglomeration of planets) undergoing great strife. Like Queen Amidala, her royal attire includes high fashion that reaches truly epic proportions of bizarre beauty. Apparently, her regal costume was even inspired by discarded concept art for an outfit originally designed for Padme in Episode I. And like Padme, she is more than a match for her Jedi lover–fiercely intelligent, politically savvy, strong-willed, and often at philosophical odds with the man she loves (and it’s significant that Padme is the one who eventually helps her prove her case–meanwhile Obi-Wan’s initial suspicions against Satine’s character echo with the accurate suspicions against Padme’s former lover, Clovis). Much like the lemur-like species we met earlier on the series, Satine is a strict pacifist. Having grown up in a land torn by civil war, she believes that violence is never justified, and finds the idea of “fighting for peace” a contradiction in terms. The only weapon she carries is a deactivator capable of knocking out enemy droids. 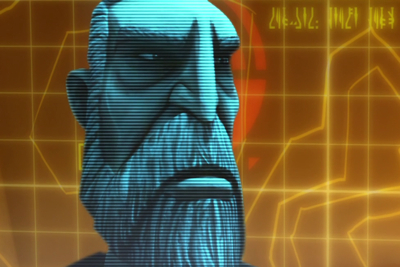 She also represents the first system we have seen that, although technically part of the Republic, wants no part in the war. There was also clearly contention regarding Mandalore joining the Republic in the first place, which has now erupted into the terrorist actions of a militantly nationalistic organization, Death Watch, whose goal revolves around overthrowing her rule, taking power, and declaring Mandalore free of Republic “oppression,” even though if they take power, as is the case in many political revolutions throughout history, Mandalore will simply fall victim to their own despotic oppression. In fact, they’re actually being backed by Count Dooku (and, by extension, Chancellor Palpatine) whose complex plan is for Death Watch’s terrorism to force the necessity for Republic troops to occupy Mandalore as an ostensible means of protecting it, which would then incite the people of Mandalore to revolt and support Death Watch’s plans of taking over the government, all secretly aided by Separatist money. Death Watch themselves remain unaware that Dooku/Sidious would inevitably then crush Death Watch or force the planet into servitude to their cause, but luckily none of this comes to pass, since despite the best efforts of this conspiracy, Satine does emerge victorious in keeping the Republic out of Mandalorian affairs.

And it says a great deal about the strength of her character, resolve, and commitment to her philosophy that Death Watch’s actions never drive Satine into accepting Republic occupation as even a necessary evil. Instead, it actually furthers her commitment to taking care of the problem internally. Although she can’t know every step in Death Watch and the Separatists’ ultimate schemes, she proves herself to be immensely intelligent in having a sense that something is wrong in the Republic when they are attempting to strong-arm a planet into accepting its help under the guise of saving said planet from itself. Because, again, the irony is that Palpatine has set it up so that the very act of the Republic “protecting” Mandalore is what would cause it to fall to violent revolution, and so he is able to make his argument in such a way that he seems to be the beneficent peacekeeper and Satine an unreasonable and ineffective ruler of a planet whose chaotic political mess is rapidly spinning out of her control.