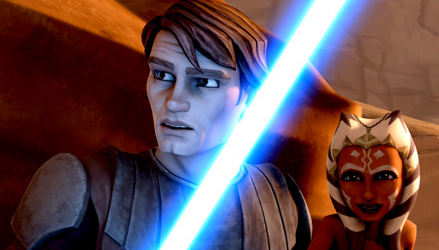 “Landing at Point Rain” continues the story not too long after “Senate Spy,” and while it doesn’t pick up on all of the emotional threads of the previous episode, it does spring from its events, in that it sees the Republic army returning to Geonosis, in an attempt to reach and dismantle the new droid foundry whose blueprints were in the chip that Padme stole. Whereas “Senate Spy” is a densely plotted installment of Clone Wars, “Point Ran” is actually quite light on plot, instead being essentially a 22-minute-long battle sequence, and while I wouldn’t necessarily want to see this sort of thing in every episode, I found it beautifully done and, in many ways, narratively crucial.

Although a show about war, The Clone Wars doesn’t have time in every episode to include long, drawn-out ground battles, nor should it, for it would grow boring fast, but at the same time, without it, the showrunners could also run the danger of seeming like they’re not spending enough time on the grit and emotional toll of actual war and instead just doing a laser-guns-in-space kind of production. And so this episode slows things down and depicts in real time (or close to it), a complete battle. And it is highly charged and visceral and messy and loud and suspenseful and hellish, and significantly features what I believe is the first battle sequence on the show to include the Clone armies fighting not only droids but organic enemies. It’s also significant that this fight is set on Geonosis, the site where the Clone Wars initially began, as it really hammers down the point that not only is this war going on far longer than expected (as do most wars) but that the Republic is actually losing ground it had already considered won.

There are all sorts of extremely dangerous moments for all of our characters, and even a few touches of the sort of gallows humor that someone in this sort of situation might employ in order to maintain their sanity. Anakin and Ahsoka, in particular, make a competition of how many kills they can achieve over the course of the battle, and although they are referring to droids, even Obi-Wan (usually the dry humorist) seems uncomfortable with them seeming to take this lightly. But the older and perhaps even wiser Master Mundi (who we had previously only seen in the prequel films) smiles at Anakin and gives him his count, which is higher than either of theirs, confirming for Obi-Wan that these aren’t the actions of an impetuous boy but a coping mechanism that even someone as older and experienced as he partake of in battle. He then asks Anakin what he has earned as a result, and Anakin smiles and responds that he’s earned his respect, which Obi-Wan notes is a very big thing, coming from Anakin. It’s moments like this that are amongst my favorites on the series, because they’re so tightly yet subtly written, saying a great deal without over explaining. We don’t have to be told how Mundi’s words have caused Obi-Wan to reevaluate his scolding of Anakin. We understand it based on Obi-Wan’s good humored reaction and kind words.