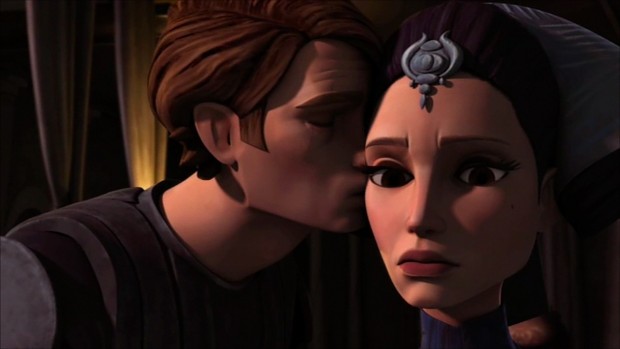 “Senate Spy” is one of those Clone Wars episodes that is so packed with plot twists and character bits and reveals that, not only does it feel like it could have been a full movie, but that it just might’ve run as long as one, too, and I mean that in the best possible way. The pacing is such perfection that it is truly unbelievable that so much happens in such a short amount of time, because nothing feels underdeveloped or short-changed.

The plot deals with a Republic senator, Clovis, who the Jedi Council suspects of being a Separatist spy, and who they try to convince Padme to spy upon, to no avail. It isn’t until Anakin reveals the entire situation to her that he learns that Yoda had never told her why she was supposed to be spying on him, and only then does she insist on doing it, ironically against Anakin’s wishes. There are multiple layers of foreshadowing and irony here. Firstly, the Jedis’ later attempts to convince Anakin to spy on Palpatine will be the very thing that cements his distrust in the Order, thanks to the manipulations of the Chancellor. Here, the idea doesn’t sit well with Padme or Anakin, the former because she at first doesn’t realize the reasons behind the request and the latter because he worries about putting his (secret) wife in danger. And although they do get the information they need as a result of this intrigue, I wouldn’t be surprised if he continues to on some level resent her near-death experience, blaming it on the Jedis’ request. It’s also telling that Yoda didn’t tell her the full story. The implication is that had he been upfront with her, she might have instantly agreed, since she does as soon as Anakin explains it to her. Similarly, had the Council shown more trust in Anakin in Episode III, allowed him into the inner ranks, and fully explained their stance and situation, he may not have felt as driven away from them and into Palpatine’s open arms, so to speak.

The other element at play here–which is quite ingenious–is the revelation that this senator, Clovis, is actually a former lover of Padme’s. Anakin’s love for Padme was always so storybook pure that it seems very likely that, up to this point, the idea of her being romantic or even sexual with another person before him simply never crossed his mind, and so Anakin has to deal with the idea of the woman he loves not only pretending to be romantically interested in another man, but another man who was once a lover of hers. These feelings of jealousy are only exacerbated by the fact that Anakin and Padme are having some relationship troubles, stemming from his leaving her alone on what was supposed to be a romantic evening for them, in order to meet with the Jedi Council.

What’s great about the scenario is that the emotions feel so real. Although Padme is a mature individual who understands about the secrecy of their marriage and the importance of Anakin’s duty, it also makes sense, as a human being, that the constant need to hide the truth of their relationship would wear on her sometimes and cause her to irrationally snap at Anakin. It’s also telling that Padme never seems to deliberately rub the fake relationship with Clovis in Anakin’s face. She does her best to outwardly avoid Clovis’ advances, probably more irritated at Anakin for not seeming to have faith in her to not go too far, than anything else, and yet, on some level, she has to know how hard it is for her husband, Anakin, to watch her be wooed by another man, and so she doesn’t go out of her way to make things difficult for him–even when she faux-embraces Clovis, she makes it instantly clear to Anakin that it is only to hide the holochip that she then passes to him. Meanwhile, there are some nice bits of comedy for Anakin, reacting throughout just as uncomfortable with the situation and hateful of Clovis as anyone in that situation would likely be.

The episode also gets a great deal of credit for continually defying expectation, for although Clovis is revealed to be working with the Separatists, he also does truly love Padme, to the point that even once he learns that she has betrayed him, he continues to help her after Lott Dod–the Trade Federation senator from “Supply Lines”–has her poisoned (it’s also to Padme’s credit that, before she realizes she’s been poisoned and thinks she’s simply ill, she uses the symptoms to her advantage, to send Clovis away to fetch her water while she steals the holochip), agreeing to help Anakin get her off the planet as long as Anakin gives him back the chip so that he won’t be in hot water with Dod. He even pulls a blaster on Dod, so that she can get to safety. It would have been so easy for the Clone Wars writers to have made Clovis a petty crook but instead they give him a heart, which makes it all the more shocking when Anakin not only refuses to restore the chip to Clovis (as expected) but leaves him on the planet, at the mercy of Dod and his men. This is arguably the darkest action Anakin has taken on the show to date, and while it’s certainly understandable, given the danger the man had put his wife in, it also seems to violate the Jedi code against seeking revenge or punishment–particularly given how Clovis had helped them despite his allegiances–and to speak directly to one of the problems with Anakin being a Jedi. Emotional attachments may not necessarily be dangerous for all Jedi, but for someone as volatile as Anakin can be, they certainly can be.