[Note: The following post contains spoilers for the Star Wars: The Clone Wars episodes, “Bombad Jedi,” “Cloak of Darkness,” and “Lair of Grievous”.] 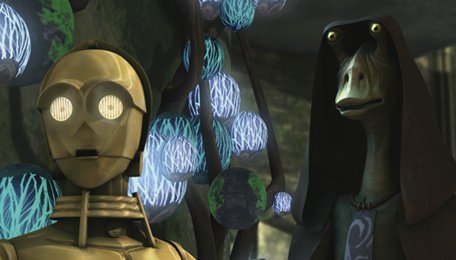 As I understand it, this isn’t a much loved episode amongst a large number of Clone Wars fans due to its largely goofy humor, which goes hand-in-hand with its prominent use of Jar Jar. Although, as I’ve said before, I’m not the hugest Jar Jar fan in the world, I, however, actually liked this one quite a lot, for a number of reasons. To deal with the Jar Jar stuff first, I found that, as with his first appearance, the Clone Wars team knows how to use the character most effectively. I’ve linked to this defense of Jar Jar in the past, which argues how he fits into the fool/trickster role in mythology, a role which may seem stupid or annoying on the surface but which can obscure a braver, wiser soul beneath the facade. In Jar Jar’s first appearance, Bail Organa deliberately used his antics in order to distract the Trade Federation envoy’s attention away from the Toydarian supply ships. And here, again, these antics come in handy, even if he also causes a great deal of trouble in the process, accidentally destroying Padme’s ship and their only means of escape.

Throughout the episode, yes, he remains goofy and accident-prone, but he also exhibits remarkable bravery, putting his life in danger by masquerading as a Jedi, therefore making himself a target despite his inability to defend himself, and then performing death-defying acts such as climbing the side of the castle and even being temporarily swallowed by a sea monster in his quest to save the senator–an act that ironically is the first step to a friendship with the creature (the first time on Star Wars that we see someone befriending a monster, this one significantly reminiscent of some of the huge, Nabooian fish creatures from Episode I), who then aids him in saving the day. At the end of the episode, Onocanda Farr tells Jar Jar that he is “either the bravest or the most foolish Jedi I have ever met,” and he humbly replies, “I’m just a Gungan, and I don’t think I’m either.” Threepio, in a moment of remarkable perceptiveness responds to that by saying, “Well, I think you’re a little bit of both.” And that, in one sentence, completely nails the character.

Speaking of which, Threepio is also utilized extremely well. For me, a lot of the episode’s early comedy works because of Threepio’s harried reactions to Jar Jar’s klutziness. Without his perfectly in-character, Eeyore-esque responses, I might have been simply irritated by Jar Jar, but the two play off each other beautifully. Threepio’s episode-ending reaction also feels truly earned, because Jar Jar’s bravery also inspires Threepio throughout the episode as well. After initially complaining, he goes on to follow in Jar Jar’s footsteps, at one point tricking a bunch of battle droids to go the wrong way in searching for the “Jedi” and later managing to contact the Republic to bring rescue.

Another extremely important aspect of the episode is that, when it comes to Padme being captured, once again this so-called damsel isn’t really in that much distress. Soon after being handcuffed and locked up, she frees herself with a lock pick she’d had secreted away in one of her boots and manages to overtake the guards and escape her prison. On Clone Wars, Padme is exactly the sort of kickass heroine that she often hinted she could be in the prequel trilogy but which she only had the time to display fleetingly.

And, also in keeping with her character, although she is capable of taking care of herself physically, her greater strengths lie in politics and diplomacy. Although she is betrayed to the Separatists by a family friend, just as her daughter will one day be betrayed by Han’s old friend, Lando, to the Empire, she deals with him fairly and wisely (and just like Lando, Onocanda Farr, will regret his decision almost immediately once his new ally alters the terms of the arrangement and threatens his friends more fatally than had been originally indicated). Rather than holding a grudge, she demonstrates understanding and compassion as to his people’s desperate situation that led to his behavior, and even in the end, reasserts their friendship, apologizing for how the Republic has neglected his people. I love that this show acknowledges that, while many of the Separatists are untrustworthy and villainous, that the reason that Palpatine was able to successfully use them in the first place is because the Republic has been failing in many areas and has fatal weaknesses that he was able to exploit, and the same is true of the Jedi Council, as we see in the next two episodes.