[Note: The following post contains spoilers for the Star Wars: The Clone Wars episodes, “Nightsisters,” “Monster,” and “Witches of the Mist”.] 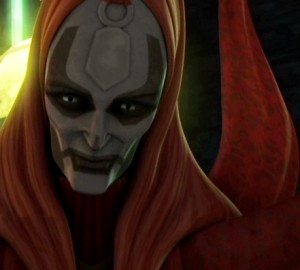 After the brilliant but more-political-than-mythic Senate three-parter, this next trilogy of episodes–2.12, “Nightsisters,” 2.13, “Monster,” and 2.14, “Witches of the Mist”–is a glorious return to the grandly sweeping, mythological area of the Star Wars universe, for the first time ever on Clone Wars telling a story largely from the perspective of Dark Side users and revealing a sect of witches apparently popular in the EU but who never made themselves as prominently known in the on-screen ‘verse, other than perhaps a fleeting reference via Ventress in a previous episode. As far as I can recall, the only Dark Side characters we had ever seen were Sith Lords (of which there can only be two at a time) and Ventress (Grievous works for Dooku, and wields lightsabers but doesn’t actually use the Force), and on screen, there had never been any explanation as to her origins nor whether there were any other people utilizing the Dark Side who weren’t Sith. It seemed that there certainly had to be. The allure to the Dark Side is always so powerful and hard to combat that there couldn’t be only two people ever using it at all at any given time, but, up this point, since we saw no others, Ventress almost felt like an anomaly.

These episodes, however, introduce us to her origins: a sisterhood of powerful witches who wield the Force the way a dark sorcerer wields magic. Although the Force has always had certain properties that seem magical, the Jedi have always used it more as a mystical tool to help enhance their senses, reflexes, and abilities rather than a power akin to casting spells. Ditto for the Sith Lords, who certainly use it as a means of vanquishing their enemies but still more in the sense of a warrior with his weapons. The Nightsisters, on the other hand, tap into the Force and use it in a way that any fan of fantasy and mythology would identify as dark magic, subverting this natural energy for their evil ends.

These episodes’ depiction of their use of the Force helps further expand the mythic landscape of Star Wars, as well as allows us to temporarily view the world from the Dark Side perspective. It can be all too easy to write off people who have fallen to the Dark Side as hard, emotionless beings who care for nothing but their own evil ends, and yet it’s actually the opposite. These are people who are basically victims of their emotions, unable to control them, and while yes, many of these emotions are rooted in selfishness and in wanting to bend the world to one’s will, they can also seemingly paradoxically spring from a place of initial caring and/or love. Even Anakin doesn’t truly cross over to the Dark Side until he decides he must do everything in his power to save the woman he loves. 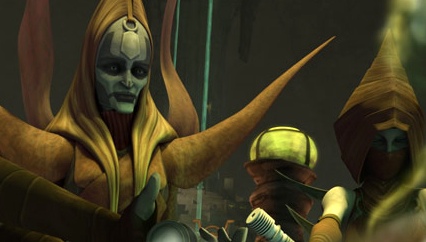 This arc is set into motion when Palpatine orders Dooku to kill his apprentice, Ventress, not due to her failure but rather due to her immense talents. Sidious is worried that she is growing too strong, too powerful, and that she might in the future prove a threat to him, and so wants the problem nipped in the bud. This is where the looking-out-for-number-one aspect to the Dark Side comes in. A Sith Lord has to, practically by definition, be constantly paranoid that someone younger will come along and supplant him. It’s even part of Sith ritual that at some point, the apprentice is meant to challenge the master and kill him in combat, taking up the reins of Sith master himself. That is how the apprentice becomes the master. It’s extremely telling as to just how formidable Ventress has become, then, that Palpatine currently fears her potential for overthrowing him more than Dooku.

And perhaps he’s right to, given that Dooku doesn’t challenge him, instead following his commands, betraying someone who had been like a daughter to him, but–unbeknownst to Dooku–failing to finish her. More significantly, however, we hadn’t realized quite how deeply he cared for Ventress until being forced to (attempt to) destroy her, because much as Anakin paradoxically causes the circumstances that lead to Padme’s death by trying to prevent them, Palpatine’s attempt to curtail an attack from Ventress instead leads to Dooku now wanting to overthrow Sidious himself. When Dooku offers the opportunity to his new apprentice, Savage Opress, to rule the galaxy together with him one day, it is rife with echoes of Darth Vader’s later offer to Luke in Empire, not to mention Anakin’s to Padme near the end of Revenge of the Sith. Dooku wants revenge for what Palpatine made him do to Ventress, just as Ventress wants revenge on someone she considered to be a father for turning on her.

And this betrayal stings all the deeper when we are afforded the opportunity to see inside Ventress’ head, as the Nightsisters tend to her. We are given flashes of how she became who she is today and might be stunned to learn that, as a little girl, she was rescued from a cruel master by a Jedi (and so strong was she in the Force that even as a baby, she was able to harness it to toss a grown man), who raised her from that point and trained her in the ways of the Force. She was once a “good guy,” so to speak–a Padawan–until her master was killed, causing her great anguish, which led to her emotions spiraling out of control and her succumbing to the Dark Side when she destroyed the man who had killed him. We learn, therefore, that buried underneath the seemingly heartless Ventress we have known since the show began is a young woman who had such a deep relationship with her first father figure that his death drove her over the edge. We see there her capacity for bonding with a strong parental figure. And she finds a dark mirror for her original Jedi father with a dark father figure, Dooku, who after years of being together, then suddenly seems to want her dead. It’s no wonder that she reacts with such anger and hurt. In many ways, he did the seemingly unthinkable: he managed to break her heart all over again.