[Note: The following post contains spoilers for the Star Wars: The Clone Wars episodes, “The Unknown,” “Conspiracy,” “Fugitive,” and “Orders”.] 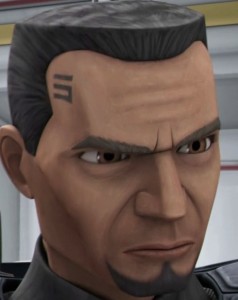 In retrospect, it’s actually kind of shocking that, at least for a while there, it seemed that this Clone Wars arc might never see the light of day, given the fact that it finally shines light on one of the most crucial elements of the entire prequel series. Thank God for Netflix streaming, although I hope against hope that the sixth season eventually makes it to Blu-ray so I can have the complete set. Because this arc is incredible and exemplifies Clone Wars‘ refusal to back down from its mission statement, regardless of technically being a children’s cartoon series. Major, extremely dark things happen in these episodes. At least one beloved character dies–and his is not the only death–while trying to uncover the truth of Palpatine’s conspiracy, and the Star Wars galaxy is pushed further along the bleak course to which it is inevitably heading.

The major revelation of these episodes is the ultimate truth behind Order 66, which was Palpatine’s order to the Clones to finally slaughter every Jedi in sight in Episode III. One of the most fascinating aspects of the Clone Wars series has been how it has humanized the eponymous Clones, more so than any other previous Star Wars property. In the films, neither the Clones nor the Imperial stormtroopers who replaced them ever seemed anything more than interchangeable soldiers, doing their duty, unquestioningly following orders, each and every one a cipher. On Clone Wars, however, this has always been different. We have come to know numerous clones intimately, and others in one-off stories which allowed us to see them as distinct individuals with their own personalities and ambitions, the only problem being that it was therefore difficult to see what could ever get all of them to revolt against the Jedi with whom they’ve fought side-by-side for so long, en masse. Sure, a number of them might have done as they were instructed, but men like Rex and Fives, who had spent years loyal to the Jedi not just because that’s what they were meant to do but due to having developed respect for them? That seemed a harder sell.

And in this episode, we get the answer, which confirms one of my major theories, that Order 66 was actually a sort of sleeper directive unknowingly embedded in the Clones’ brains which needed to be activated in order to force them to mindlessly act out the assassinations–in other words, tragically turning them from individuals with senses of self and morality into the robotic servants they had always seemed to be before this series. We learn through Fives’ investigations throughout these episodes that every clone has a small organic chip grown into his brain from conception which includes the Order 66 directive, and all it needs is activation to turn any current Clone into a Jedi-killing machine.

Fives’ journey to the truth begins when Tup–who we spent a great deal of time with in the Krell arc–suddenly snaps and kills a Jedi in battle. After that point, every time he comes near Jedi, he suddenly experiences the urge to kill them. Although we don’t know it at the time, his chip has malfunctioned, causing him to fall victim to its control before Palpatine was ready. As far as Fives and the Jedi can initially tell from the Kaminoan doctor’s reports, however, it is a tumor, likely due to some sort of exposure that Fives might have been exposed to, as well. But Fives soon loses faith in her, when she seems very eager to simply kill Tup in order to analyze his brain. He enlists a medical droid, AZ-3, to help him discover the truth, which unfortunately leads to Tup’s death regardless, after not surviving the surgery to remove the “tumor,” and eventually has AZ-3 remove the chip they discover in his head, thus unknowingly making him the only Clone not susceptible to Order 66. His unlikely friendship with the initially proper, rules-oriented AZ-3 is one of the few sources of comic relief in this otherwise overwhelmingly foreboding arc.

The saddest thing about these episodes and what also makes them so relentlessly tense is that we keep waiting for the other shoe to drop throughout. The closer Fives comes to discovering the truth, the more likely we know it is that he won’t survive, because–given this is a prequel–the future is unavoidable. Order 66 will be carried out, and all of the Clones will turn on their former Jedi masters. And given that it isn’t in Fives’ personality to run away or to not pursue this, the only option is death. Palpatine even goes so far as to privately attack Fives, knowing that Fives will likely retaliate against him physically, and that no one will believe the Clone, particularly against the elderly Chancellor of the entire Repulic. According to the Kaminoans’ lies (as instructed by Palpatine), the chip is actually something which keeps the Clones’ violent impulses in check. And so when the chipless Fives does this, he seems to be falling victim to exactly what they had warned against.

And, of course, when he tries to present his evidence to Anakin and Rex, particularly when he says that the conspiracy goes all the way to the top–to Palpatine–he sounds crazy to them, particularly Anakin, who would never believe that of Palpatine without solid evidence, and particularly when he’s been manipulated into thinking that this is just an expected symptom of the removal of Fives’ chip. But even basically knowing from the start that Fives, the last surviving member of the Domino Squad, won’t survive this ordeal, this is an extremely compelling arc from start to finish. Just like his other fallen brothers, Fives remains one of the bravest soldiers we’ve seen on the show, relentlessly pursuing the truth while demanding that he and the other Clones be treated as people, not as tools of war.

The sad fact is that his quest is hopeless and that his brothers’ personhood ultimately will be taken from them, but that only drives the tension and dramatic irony further. We have known for so many years what happens to the Jedi and have seen them fooled by the Sith throughout the course of this show, and yet it has never stung worse than here, when, in a way, Fives comes so frustratingly close to undermining Palpatine’s plans, while in another, he never really had a chance. And our frustration and anger at his defeat feel real in a way that the events of space operas often don’t. Fives becomes a real person to us, and for a while, we forget about the big, sweeping epic story of Star Wars and think about what it’s like for this one man to discover that everything he believed about the war and why he was created is a lie. And the fact that he pursues the truth despite the odds makes him one of the great, unsung heroes of the series.