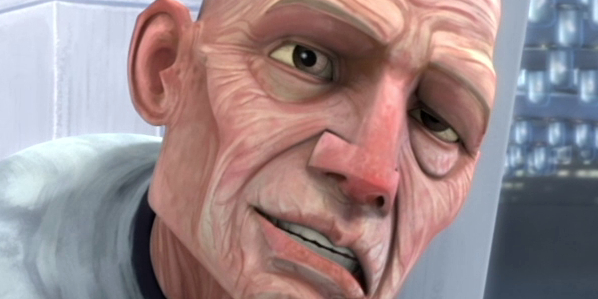 “ARC Troopers” yet again returns us both to the surviving members of the Domino Squad and to Kamino, and it says something about how elegantly the show developed these characters, as well as audience affection for them, that even amidst a sea of Clones, I found myself so massively excited to see them again and feeling genuine sadness when 99 learns from Fives and Echo that Hevy had died. The fact that, to that day, he still seemed to carry Hevy’s medal on him at all times is extremely touching and speaks to how greatly his friendship affected him. And over the course of the episode, 99 will be elevated to heroic status as well. Just as 99 managed to inspire Hevy to reach inside himself and be the best person he could be, so does Hevy’s sacrifice inspire 99, who by the end, sacrifices himself in order to help save his brothers, just as Hevy did.

The Clone Wars series has managed to humanize Clones in ways the films didn’t, and there is something so inspiring about seeing all of these Clones, from the strongest all the way down to the physically weakest among them–99, as well as the kids, who were so well established at the end of the previous season during the Boba Fett arc, thus also reiterating the idea of inner strength not coming from size or age that recurs throughout Star Wars and which was only recently referenced in “The Academy,” in which a group of school kids exposed corruption in the Mandalorian government–join together to protect not only their brothers but their home, which they take just as much pride in as anyone born a more conventional way would, as well as in seeing Fives and Echo, the last survivors of that group of Domino Squad misfits being promoted to the most elite Clone guard. And as always, this is underlined by the irony that, though they believe they’re fighting for a just and noble cause, they aren’t, and being elevated to ARC Troopers surely means they will be among the Clones that destroy the Jedi and ensure Palpatine’s rise to power.

The episode is also significant for containing the first meeting between Ventress and Grievous, Dooku’s two most prominent students, and also has a great thread between Obi-Wan and Anakin. So often, Anakin’s instincts are the ones that are proven to be right between the two of them, despite his unorthodox methods, that it’s nice to see Obi-Wan here realizing that something was going on under the water. His solitary underwater battle against the droids also feels reminiscent of his first solo journey to Kamino in Episode II, and I love the recurring flying sea creature who aids him numerous times–another example of the natural world and positive energy trumping technology and the Dark Side in Star Wars.

This is yet another excellent standalone episode of The Clone Wars that deals with political corruption. In this case, the Trade Federation has placed a blockade around the planet of Pantora–whose people we first met in the brilliant “Trespass”–just in time for Dooku and the Separatists to “conveniently” appear to offer them aid and food should they leave the Republic. These dirty tactics culminate in the kidnapping of the Pantoran chairman’s daughters, leading the chairman and his son on a quest to save them. But easily the coolest part of this episode is that the bounty hunter who Lott Dod hired to kidnap them is Greedo. Yes, the Greedo, he who Jabba will send after Han Solo in Episode IV, only to end in everyone’s favorite roguish anti-ish hero blowing him away at the Mos Eisley Cantina–a location that we also get to see in this episode. Honestly, what with that and the visit to Jabba’s palace, this episode is kind of Star Wars continuity porn and I love it for that.

The episode also reacquaints us with the Pantoran senator, Riyo Chuchi, who has grown even stronger since the Jedi helped inspire her to stand-up to her planet’s corrupt leader in her earlier appearance, no longer mousy or meek. And here she and Ahsoka kick much ass, literally and figuratively, culminating in her turning the tables on the Trade Federation and “blackmailing” them into dismantling the blockade, unless they want everyone to find out about the kidnapping. And the Chairman, his son, and daughters also get beautifully developed, in a relatively short amount of time (seriously, this show has some of the most impressively economical writing I’ve seen on any TV series).

And that’s all wonderful, and I would love to say something more deep and insightful about this one, but my thoughts keep getting drowned out in a chorus of “GREEDO, GREEDO, GREEDO, OMG!!”