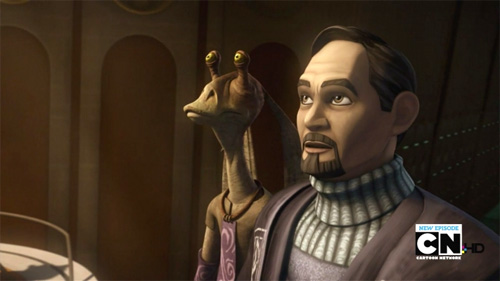 In many ways, this episode feels structurally like the polar opposite of the previous one, in that it involves numerous characters spread all over the galaxy, beginning with an opening sequence that bounces between multiple locations, featuring appearances from people such as Yoda, Obi-Wan, Dooku, and a (to us) new Jedi Master, Di, who is currently desperately striving to protect the people of Ryloth, a planet of people suffering and starving as a result of getting caught in the middle of the war. It isn’t until a few minutes into the episode that we finally realize who its central characters will be, and those are namely Bail Organa–Leia’s future adoptive father–the Toydarian king, Katuunko, and the supremely divisive Jar Jar Binks.

This is yet another episode that proved to me the series’ commitment both to seriously delving into Star Wars continuity, revealing twists and ripples we might not have expected, as well as to honoring/complementing the prequels. First off, it gives us the chance to spend more time with Bail Organa than we ever have before, a wonderful opportunity to see his great diplomatic abilities which he will one day pass on to his daughter. Watching him at first make his argument/plea to the Toydarian council as to why they should help Ryloth and later hold his secret meeting with Katuunko to help sneak supplies to the Rylothians, we can see just where Leia got her guts, bravery, and intelligence that will one day allow her to stand up to Darth Vader and Grand Moff Tarkin, without flinching.

The episode then goes on to better utilize Jar Jar Binks than I’ve possibly ever seen before. Although I often find myself being just as annoyed by Jar Jar as the most vocal portion of fandom seemed to be, I truly admire this show for not simply ignoring aspects of the prequels that many people don’t like, and to that end, they unapologetically include Jar Jar and even begin the episode with him being just as seemingly irritating as ever. But then, perhaps for the first time, we see Jar Jar’s antics actually work advantageously. Bail and Katuunko actually bank on his foolish behavior working as a smokescreen, to distract the Trade Federation senator from noticing the relief supplies being surreptitiously loaded onto the ships behind him. My friend, Paul F. McDonald, whose fantastic, scholarly Star Wars essays I linked to in my previous post, has a great essay on Jar Jar that delves into the fool tradition of which he is a part, and here, more than in any of his appearances in The Phantom Menace, do I see Jar Jar fully embodying this archetype.

In another fantastic flip, when we first see the Toydarians, we might inwardly groan. The first guard seems to be just as cruel and petty as the only other Toydarian we would have seen before this point, Watto, Anakin’s original owner. But then, once we arrive at the council scene, we’re shown a very different view of the species and learn that not all are as repellent as that first one. In fact, Katuunko is an eminently kind and wise ruler, who is pragmatic about protecting his own people–which is the reason he’s outwardly remained neutral up to this point–but who also is not willing to allow others to suffer, thus leading to his private deal with Organa. This is the most outwardly politically-driven of the episodes thus far, and again, I applaud the series for, despite being a children’s show, basically devoting an entire episode to diplomatic relations and political dealings. We truly see here how politics can be used in the most humane of ways–that in an ideal system, politics truly are for the people, regardless of which people they are. The series’ boldness is then underlined by the bittersweet ending, in which the supplies are finally delivered to Ryloth only moments after the Jedi master, Di, succumbs to the droid army.