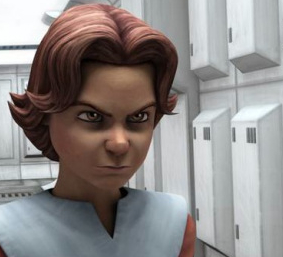 This trio of episodes–2.20-2.22, “Death Trap,” “R2 Come Home,” and “Lethal Takedown,” which, other than one episode which I’ll reach later, basically concludes my chronological journey through Season 2 of Clone Wars–revolves around the angry young Boba Fett’s attempts to avenge himself upon Mace Windu, for having killed his father during the first battle of Geonosis and represents yet again one of my favorite things about the series: its ability to pick up on and explore threads from the Star Wars universe that there wasn’t time for in the films, filling in the gaps while staying remarkably in canon. As far as the films go, we had no clue what happened to Boba between the death of his father and his eventual appearance in The Empire Strikes Back as the notorious bounty hunter who catches Han Solo, and these episodes give us a bit of an idea why his life unfolded the way it did, which is namely that, as a young child, he was unable to relinquish his anger over his dad’s untimely demise, labeling Mace as a murderer rather than as a warrior who simply overcame his dad in battle, thus leading him to team up with a group of his dad’s old bounty hunter friends to infiltrate a Republic ship and attempt to take out Windu.

One of the most clever aspects to this arc is how the show is very subtly using Boba as a mirror to Anakin, who, as we know, exacted bloody vengeance himself against the Tusken raiders who killed his mother, Shmi, and who continues to struggle with the Jedi code, since it so often seems to go against his instincts. In being an extremely intelligent kid with talents that seem to far outreach his age, Boba is also reminiscent of Anakin at that age. At the end of these episodes, when Windu is finally face-to-face with Boba and tells him he has to let go of his hatred and his desire for revenge, Boba refuses, foreshadowing Anakin’s similar fall to villainy. It’s no coincidence that Anakin is badly burned in this episode, recalling the terrible burns that will directly lead to his transformation into Darth Vader, and that at the time he is caught alongside Mace Windu, the very Jedi he will later help Palpatine kill as his first act as Palpatine’s Sith apprentice. 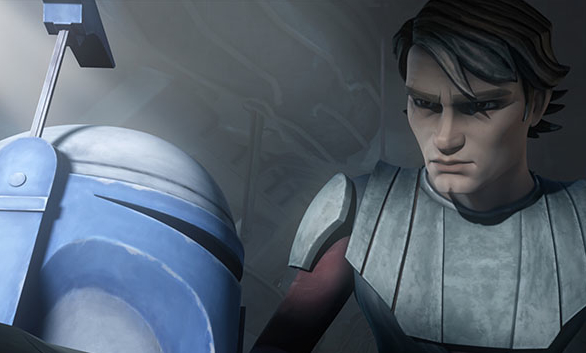 Anakin and the Mandalorian Helmet

Meanwhile, however, the episode represents the other side of the coin, in the form of Anakin’s good qualities, such as his capacity for deep friendship, even with a droid. In my post on the Artoo two-parter of season 1, I discussed the dramatic irony of how Anakin will risk life and limb to save a droid that he eventually won’t remember once he turns to the Dark Side, and also that while his love for Artoo is extremely moving, it could also be considered worrying to a degree, at least to a Jedi, since he was putting human lives in danger to save what by all rights should have just been considered a piece of technology. And yet, at the same time, how could he be faulted for being so loyal to a friend, for basically recognizing that Artoo is a special droid who, for all intents and purposes, has a soul?

“R2 Come Home” reasserts just why Anakin was so wise to foster this friendship with Artoo and to put his full faith in him. Despite Windu’s doubts, not only does Artoo attempt to deliver an “S.O.S” message to the Jedi Council to save them after they get caught in wreckage after Boba’s bomb explodes, but he fights off monsters and the bounty hunters in the process, and when his communication systems are destroyed, he outmaneuvers the pursuing hunters’ ship, and flies his small ship all the way back to Coruscant to personally deliver the message. Even Windu is impressed. Anakin’s love for this droid actually saves both their lives.

And like Anakin, Boba hasn’t yet past the point of no return, either. Although he refuses to forgive Windu, he shows clear signs of remorse for the other people who get caught in the crossfire of his quest, hesitates at times before following bounty hunter Aurra Sing’s lethal orders, and feels genuinely betrayed when she remorselessly leaves him to be caught by the Jedi (Aurra is so dishonorable, even her ex, Hondo, the pirate we’ve met on multiple occasions, seems like a decent man in comparison!).