Arguably the most famous children’s author in the world, Roald Dahl is known for his deliciously dark, lovingly twisted fables that have been simultaneously delighting and horrifying children since the early 1960s. His work is also a perfect example of dreampunk. Although none of his tales are set in literal dreamworlds or feature characters questioning the nature of reality, a la Alice in Wonderland or Inception, Dahl’s stories all occur in a heightened reality where magical green worms can transform an ordinary peach into a giant means of conveyance to a better life, where witches can whip up magical potions that turn children into mice, where a foreign prince can hire a wondrous man to build an entire palace for him, made out of chocolate.

The dream logic of Dahl’s fantasies doesn’t manifest itself only in his aforementioned flights of magic, however, but also in his transformative tweaks to the mundane world, as well. Dahl explores emotions that anyone can relate to but intensifies them through the use of darkly humorous exaggeration. For example, in the first pages of James and the Giant Peach, our young hero, James loses both of his parents in a horrific accident and is sent to live with his two terrifying aunts. And what was the nature of this horrific accident?

…one day, James’ mother and father went to London to do some shopping, and there a terrible thing happened. Both of them suddenly got eaten up (in full daylight, mind you, and on a crowded street) by an enormous angry rhino which had escaped from the London Zoo. 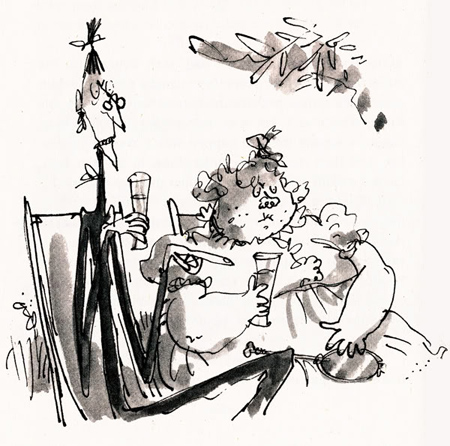 All of Dahl’s books are filled with similar moments that manage to be, at once, darkly humorous and nightmarish. Dahl himself could be a very cruel man, and one certainly gets the sense that he took a perverse sort of pleasure in scaring children. At the same time, this edge might be what his young readers find most appealing about his writing. His stories aren’t nice. They have an insidious sort of thrill about them. Don’t take baths, children, warns the grandmother from The Witches, or the witches will be able to smell you. The dirt is the only thing that covers your scent and could save your life. And these witches could be absolutely any kind lady on the street, but take particular care if she happens to be wearing a hat or gloves and seems to be scratching her head. Often, something that practically scares us to death in a dream will seem silly in the light of day. And that is precisely what Dahl taps into so brilliantly. The idea of your parents being eaten by a rhino, or of ordinary, middle-aged women devouring you if you wash yourself might be terrifying when you’re asleep but hilarious when you think back on it later. It’s this juxtaposition of the ordinary and the fantastical that makes the landscape of his novels so dreamlike. They’re all just one or two steps divorced from reality.

Returning to James, his aunts beat, abuse, and torment him to a degree that would make Cinderella’s stepmother seem a well-adjusted creature by comparison. Meanwhile, in Matilda, the poor girl’s parents, the Wormwoods, are similarly monstrous, deriding her for being different and smarter than they are, when they aren’t outright ignoring her. And then, in the same novel, there is, of course, Miss Trunchbull, the nightmarish elementary school principal who taunts the children, throwing them out of windows and pitching them across the field by their pigtails when they talk back to her. Dahl takes feelings and fears that any child can relate to–the fear that you might become orphaned, the sadness of feeling lost and alone in the world, the feeling that adults don’t understand you, at best, and are out to get you, at worst (who hasn’t, at some point in their life, had a teacher who seemed to delight in making you suffer?)–and transforms them into larger-than-life villains and torments for children to overcome.

Dahl’s characters often have a Dickensian feel to them, both in their comically exaggerated natures and their often extremely expressive names–Aunt Spiker, Aunt Sponge, Augustus Gloop, Veruca Salt, Agatha Trunchbull. His depiction of poverty can be similarly Dickensian: James forced to live, dirty and starving, in his aunts’ cellar; the Bucket family from Charlie and the Chocolate Factory, all living in a ramshackle house and on the brink of starvation, with even something as seemingly commonplace so rare that Charlie will take weeks if not months to eat a single chocolate bar, savoring every nibble, one per day. And, yes, there are actual people who live in awful conditions, but Dahl tweaks the depiction of his destitute families in such a way that is just ever so slightly surreal, so that the emotions are grounded in reality, but the situation itself remains dreamy. 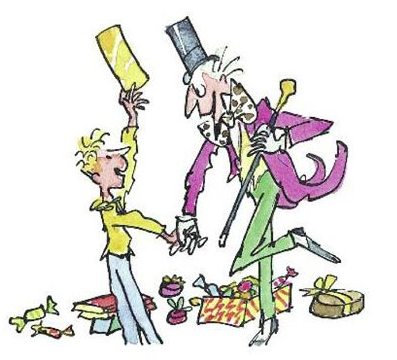 For example, Charlie has four ancient grandparents, all of whom are still living. This, of course, isn’t impossible, though it is unusual, given that their nutrition is so poor. Another oddity, however: each pair of grandparents has names that derive from the same root. One couple is Joe and Josephine, the other George and Georgina. We are beginning to move into fairy tale territory. And then Dahl also asserts that all four sleep in one large bed, each couple facing opposite one another, and that none of them have gotten out of the bed for years. We know that this is meant to be a literal statement, because of this scene, which occurs when Grandpa Joe becomes overcome with joy that Charlie found a golden ticket:

Then the old man took a deep breath, and suddenly, with no warning whatsoever, an explosion seemed to take place inside him. He threw up his arms and yelled “Yippeeeeeeeeeeeeeeeeeeeeeeeee!” And at the same time, his long bony body rose up out of the bed and his bowl of soup went flying into the face of Grandma Josephine and, in one fantastic leap, this old fellow of ninety-six and a half, who hadn’t been out of bed these last twenty years, jumped on to the floor and started doing a dance of victory in his pajamas.