[Note: The following review contains spoilers for all aired episodes of Penny Dreadful, including the most recent, “Possession”.] 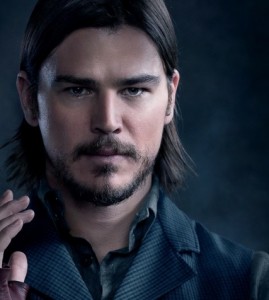 It seems that, practically every week, Penny Dreadful gets richer and scarier, and this week is no exception. This–the penultimate episode of the first season–was very likely the best, eeriest episode so far. As with the majority of installments to date, it doesn’t play by general narrative rules, here that the final episodes of a season should provide major revelations and be grandly epic. Instead, “Possession” is small, intimate, and claustrophobic, zeroing in on only a small selection of characters and taking place entirely inside the Sir Malcolm’s home, where Vanessa is still suffering from possession.

In the second episode, “Seance,” Eva Green was momentarily possessed by a spirit and, for about 10 minutes of screen time, gave an absolutely shattering, riveting performance that demanded a viewer pay full attention, the direction rarely if ever cutting away from her nor allowing for any respite or relief from the intensity or even emotional violence of the situation. This episode feels like an hour-long version of that scene. I say “feels,” because it doesn’t actually stay with Vanessa the entire time, however the lasting, relentless power of her scenes, combined with the fact that we, along with the characters, never seem to leave the house for the entire episode–which, we are told, lasts about a week, in the story–makes it seem that way. All of the tensions brewing throughout the season erupt in this episode, and since everyone remains in this relatively confined space for the entire time, these emotions practically reverberate throughout the walls. It is a remarkable piece of filmmaking, anchored by Green’s dazzling, painful, indescribable portrayal of the suffering Vanessa.

Out of the many fascinating character moments that occur throughout the episode–which has little time for levity, other than the scene in which Ethan shoots Victor how to shoot a pistol in the basement, only to be scolded by Sembene–perhaps the most fascinating is the discovery both on Sir Malcolm and others’ parts that he’s not a good person. Even after his son died, wishing that his dad would name a mountain range in Africa after him, instead he named it for himself, and now, with his daughter’s life on the line, we and Ethan realize that he has been playing with Vanessa’s life as well, allowing her to remain in torment rather than attempting an exorcism simply because he hopes that, in this state, she would be able to contact Mina. The look of disgust on Ethan’s face speaks a thousand words, as does his admonishment that Malcolm would sacrifice anyone for his potentially unsaveable daughter, including this woman, who is, for all intents and purposes, though he never realized it, another daughter of his.

It’s an incredibly intense episode, with all sorts of sturm und drang, though all focused on this tight group of people, and numerous times, during instants of lucidity, Vanessa asks Ethan to kill her, when he knows it’s time. Even with all of this darkness, however, there is a flash of hope. The priest who Malcolm finally allows to see Vanessa proves useless. He claims that the church wouldn’t allow him to perform an exorcism, but one can tell from Victor’s dismissive attitude towards him (“Give her the last rites and get the fuck out of this house, you ridiculous man.”) and his weak, ineffectual demeanor that it’s unlikely he ever would have had the power or ability to banish a demon, anyway. In the end, it’s a simple act of a friend who cares for Vanessa who casts the demon out. Ethan simply places the St. Christopher charm that Bronna had given him on Vanessa’s forehead, speaks the words, and–at least, for now–frees her, a beautiful and surprisingly humanist reprieve after an hour of grinding, unremitting darkness. I love the irony that this very flawed man–this werewolf (and therefore, in the Church’s eyes, likely a spawn of the Devil), not to mention possibly bisexual werewolf!–is able to do what a supposed man of God cannot, would not, or both.

We leave the episode with just as many questions as last week. We still don’t know whether this demon or devil (he seems to claim to be the Devil, but who knows) is synonymous with the Egyptians gods and their scheme, whether or not he is also Mina’s “Master” or not, whether the spirit inside Vanessa is separate from the demon or devil who appears to her in the guise of Ethan here, and fucked her in the form of Sir Malcolm in the past. But, at the same time, none of that matters. The power of Penny Dreadful‘s storytelling lies in its ability to conjure up a breathtakingly grim, Victorian atmosphere and to tantalize us with its unyielding intensity and madness. The answers are almost besides the point, if the show keeps affording us episodes and performances as superb as this.