Penny Dreadful 1.06: “What Death Can Join Together”

Home » Television » Penny Dreadful 1.06: “What Death Can Join Together”

[Note: The following review contains spoilers for all aired episodes of Penny Dreadful, including the most recent, “What Death Can Join Together”.] 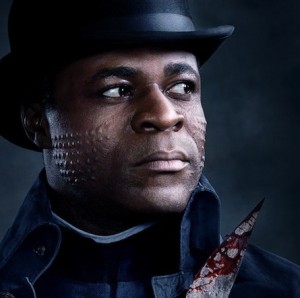 1) Caliban continues to be a fascinating mixture of sympathetic and monstrous. On the one hand, we have his genuinely sweet and sad infatuation with the actress, which is made all the more bittersweet here ironically because she actually treats him with extreme compassion. She has a brother who was horribly scarred by a steam machine and so isn’t fearful of him. She also, however, isn’t attracted to him, and when he takes her signals the wrong way and bestows a gift upon her–a book of Milton–he takes it very hard when he learns that she doesn’t reciprocate his feelings (at the same time, he learns this while spying upon her, which is intrinsically creepy behavior, although it does again reinforce his character’s Phantom of the Opera elements–another deformed “ghost” haunting a theatre in love with an actress who doesn’t love him back). On the other hand, shortly after inspiring the audience to truly empathize with him, he lashes out at his father again by murdering Van Helsing in front of him, an act of viciousness simply designed to further punish Frankenstein and push him into creating a bride for him.

2) Speaking of which, Van Helsing’s death is another example of Penny Dreadful‘s remarkable narrative audacity and willingness to subvert the established classic stories that it uses. Because on a meta level, there is something wonderfully twisted about Frankenstein’s creature, of all people, actually killing Bram Stoker’s famous vampire hunter, not to mention that he does so only moments after Van Helsing tells Frankenstein about vampires, leaving an only sketchily-educated-in-the-matter Frankenstein to have to assume Van Helsing’s role in the Dracula story. Meanwhile, however, they still manage to make it very sad and touching in context, particularly given that once again, we see Victor reaching out to someone who gives him love and acceptance–though this time in the form of a father figure who treats him as a son, in a way that he only gets fleetingly from Malcolm, before being pushed away again, rather than a son figure to him, a la Proteus–someone who Caliban then violently tears away from him.

3) Returning to Van Helsing for a moment, I really like that Frankenstein has never heard the word “vampire” before, because it feels right that one of the characters who brought the myth into the popular Victorian consciousness also brings it to the consciousness of the Victorians in this story. Vampires are so prevalent nowadays that there’s something that almost feels like a breath of fresh air about a fictional universe that is only now beginning to discover these creatures exist, and who don’t even yet know what they are called.

4) I also really like how Frankenstein quotes Shelley to Van Helsing, Shelley being Percy Bysshe Shelley, husband to Mary Shelley, who wrote Frankenstein! So these characters live in a world in which the Shelleys existed–or at least Percy did–but in which Mary Shelley didn’t write Frankenstein. And, no, they won’t be able to reveal that she later wrote it based on the “true” events of Penny Dreadful, as she died in 1851 and wrote the book in 1818, before the Victorian Era. I do wonder, however, whether this means that Oscar Wilde is also traipsing around London somewhere while these events take place. The possibility of Dorian Gray having a fling with him might be too self-indulgent and on the nose, but it could also be too delicious to not consider.

5) The flashbacks of last week completely alter how we now look at Vanessa and Malcolm’s relationship. It’s easy now to see why they often seem to have a strange mixture of mutual respect, a bond that reads as almost familial, and the implication of a long history together, along with some distrust and secretiveness. Their behavior is no different in this episode than in the past. Now, however, we understand why, and it changes the context. Here, it’s particularly interesting to see Malcolm struggling between his fatherly love for his daughter’s friend vs. his knowledge of her darker side. On the one hand, he seems to genuinely want to protect Vanessa and allow her a day of happiness, while on the other, he is fully willing to use her if it will help get his daughter back, a daughter who the usually silent Sembene warns him, may be too far gone to be saved.

6) Speaking of which, although Sembene seems to be in a servant position, he very interestingly calls Malcolm by his first name, without the “sir,” implying this isn’t a typical master/servant relationship, particularly for people from their varying social classes/ethnicities in that era. I’m sure we’ll learn more of their history at some point. For now, though, I wonder if it has to do with Sembene possibly helping him through his son’s death.

7) I really like that Ethan is the one to set Malcolm straight, that he has to start being honest with Vanessa and trusting her, particularly after that brutal fight on the “plague ship”. I love how feral and primitive the vampires on this show look and act. So much creepier than the depictions we’re used to lately.

8) It only occurred to me in this one that, just as Dorian Gray seemed to not be concerned about catching Bronna’s disease due to his blessing/curse, perhaps Ethan being a werewolf is why he isn’t worried about getting sick either. Although there’s no confirmation yet that this supernatural state would protect him from illness, this seems a pretty good indication. Interesting that two separate “human monsters” were attracted/have had sex with her…and that those same two “human monsters” have now had sex with one another. And, of course, they each also have a connection with Vanessa.

9) And once again, when Vanessa gives into her animalistic nature and finally has sex with Dorian, she is taken over by the supernatural entity that is likely the same one that has Mina and may be an Egyptian god. The question is whether the act of sex always makes her susceptible or if it’s more directly linked to the fire at the plague ship. Vanessa does certainly seem to get much more feral herself when she’s having sex. The last time it happened in the present day of the story, it was with the guy in the street right after the seance, and in both situations, she seemed to just let her inner animal take over.

10) It should be noted that the show, even up to this point, has continued to maintain a homosexual male gaze rather than Hollywood’s typical heterosexual one. Once more, the male body is objectified in the sex scene rather than the woman’s. Eva Green’s breasts aren’t even seen, although Reeve Carney’s chest is lingered upon–even abused.

11) I wonder whether, in this version, the implication is that Dorian has to stand in front of the portrait in order to heal, or if it simply comes down to timing that he happened to be standing in front of it when his wounds started stitching themselves up.

12) And we end on a moment of wonderful dramatic irony, when Malcolm finally decides to truly let Vanessa in, possibly for the first time since she was a young woman and best friend of his daughter, but it’s too late. She’s taken over again and has begun levitating and spinning. Oh, dear…