[Note: The following review contains spoilers for all aired episodes of Penny Dreadful, including the most recent, “Closer Than Sisters”.] 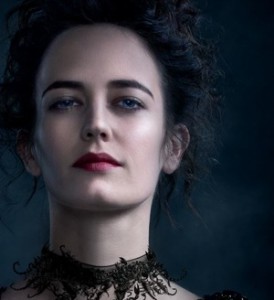 1. In keeping with Penny Dreadful‘s uniquely novelistic structure, which I’ve discussed in previous episode reviews, this week’s installment again breaks typical television rules by being almost entirely set in the past. Penny Dreadful dipped its toes into this sort of storytelling with the first half of Frankenstein’s Creature-centric third episode, “Resurrection,” but here, nearly the entire hour is flashback, although even in that, it features an unusual format, that of the epistolary novel, which echoes the original Dracula and Frankenstein stories, among others. Vanessa is writing a letter to Mina, explaining herself and apologizing for what she has done–a letter that she has nowhere to send and which, at the end of the hour, ends up in a box filled with other, likely identical letters.

2. Also in keeping with Penny Dreadful‘s mysterious nature, while aspects of Vanessa’s background, as well as her relationship with the Murray family and Mina in particular, do begin to get some explanation, the episode, in some ways, opens up more questions than it answers, particularly about the metaphysical/cosmological nature of what is happening. It also unfolds like a hazy, half-remembered dream, full of imagery that is, by turns, lush, beautiful, haunting, disturbing, and cruel, the dark storybook of the hedge maze eventually giving way to the horrors of the Victorian mental institution. Along with this come some unclear gaps in time in which it’s not quite clear how long has passed and what might have occurred “behind-the-scenes,” so to speak, in between those lapses.

3. What I might have found most interesting is that the depiction of Vanessa and Mina’s “closer than sisters” friendship is almost entirely centered on their childhood years. We see very little of them interacting as adults, and in fact, the longest conversation they have occurs after Mina has already been possessed by her “new Master,” which makes the years when they were inseparable feel even further in the distant past. When she betrays Mina, she is therefore cutting off her own roots, so to speak, destroying their idyllic childhood years in retrospect, and it largely seems to spring from her discovery as a young girl that their happy families are built on lies. Vanessa’s mother is having an affair with Mina’s father, and none of the other family members seem any the wiser. In some ways, Vanessa’s actions are spiteful. As she says, perhaps on some level, she was trying to punish Mina for leaving her and moving on (there is certainly some lesbian subtext to be had here; if it isn’t full-fledged love, then it’s at least infatuation), but I think that that cancer at the heart of their love really started to grow there.

4. There is also the direct implication the first time Mina spies on Sir Malcolm and her mother’s tryst that the demon or spirit or whatever that comes to possess her either first latched onto her that night, or first really made itself known then. Later on, it seems to be that demon that encourages or leads her to have sex with Mina’s fiance, if not at the start then definitely when she locks eyes with Mina, upside down, as he continues to fuck her when Mina wanders into the very room where they, as children, used to do taxidermy with Mina’s brother, Peter (yet another instance of the show’s repeated theme of trying to bring dead things back to life). This demon’s motives are certainly one of the major questions of the episode–why it wants her, why it possesses her, why it later has sex with her in the form of Sir Malcolm, an act which later kills her mother to simply behold it, and that is a mystery we leave the episode still wondering about.

5. Interestingly, however, although we think of this creature in terms of either the Christian Devil or a similar demon due in part to Vanessa’s Catholicism and in part due to the imagery being so similar to pop cultural depictions of possession, such as in The Exorcist, when it finally reveals itself to have taken Mina, as well, it’s clear that it’s very likely the same entity that Sir Malcolm and Vanessa have been tracking since the start of the series. In other words, this may not be a Christian demon, after all, but Amon-Ra or Amonet, or a combination of the two, assuming that they are indeed the ones who have been creating the “vampires,” as the characters have been assuming, ever since discovering the writing from The Book of the Dead on the vampiric corpse. And these certainly are closer to Bram Stoker vampires than how we tend to think of vampires today. At first, it seems that Mina might be a vision created by the demon or Amon-Ra or whatever, just as the false Sir Malcolm was, but then it becomes clear that she is herself, but that she seems to be able to turn into vapor, as well, or at least when her Master calls her home. Unless she was just trying to lure Vanessa to her doom there. We still don’t know how cognizant Mina is of her actions, and whether she is fully under “Dracula”‘s power or not. Returning to the demon, though, the question is intriguing: is this not a Christian sort of devil after all but instead the Egyptian god? is the implication that, in these sorts of cases, it’s always actually Egyptian gods? or are both simply two names for the same thing? Either way, I’ve never seen these different mythologies conflated in quite this way before.

6. Eva Green’s completely riveting performance cannot be praised highly enough. How naturally and convincingly she navigates her emotional arc from the youthful Vanessa to the mentally ill, ravaged Vanessa to the later version, much closer to the haunted, hardened person she is today, is astounding. You can’t tear your eyes away from her.

7. If you re-watch the seance from the second episode, it makes a lot more sense now, while at the same time, Vanessa being possessed by the two spirits proves to be remarkable foreshadowing for the revelations of this episode. If you rewatch now, you realize that, at the start of the scene, Vanessa was taken over by Peter’s spirit–poor, frail Peter, who died in Africa (and taking the seance into account, we learn he did so of dysentery), desperate to prove himself to his father who never loved him enough. Which makes Victor’s feelings of inadequacy when it comes to Sir Malcolm, along with Malcolm’s kind, fatherly treatment of him even more interesting, in retrospect. In many ways, Malcolm is making up for how he ignored his son all of those years. He doesn’t want Victor to come with him to Africa due to what happened to his son, and reassures him that he loves him more than he does Ethan for the same reason. It’s also both fitting and terribly sad that Vanessa had to take on the spirit of Peter in order to point blame at Malcolm, given that she was the very person who had foreseen his death and had tried to prevent it by warning Peter. It’s also very interesting that, the first time around, it seems that Peter is a young boy whereas we learn in this episode that he was older. This is also fitting, however, as Peter never truly grew up. While in the body of a man, he was still a young, weak boy craving his father’s love and attention.

8. The second spirit is Mina, and now we know for sure that Sir Malcolm wasn’t having an incestuous relationship with his daughter, as the confusing pronouns from the seance might have otherwise implied. The affair that she says Vanessa stumbled upon was the aforementioned one, between Sir Malcolm and Mrs. Ives, which nonetheless set all of the dark events that befell both of their families into motion. It wasn’t the incest we expected, except given that the two families were so close as to be spiritually related to each other, it is emotional incest in a manner of speaking, just as Vanessa sleeping with her “closer-than-sister”‘s future husband was, in a way, as well.

9. I wonder if/when we’ll meet the famous Jonathan Harker, from Bram Stoker’s Dracula, who is Mina’s fiance at the start of that novel and already her husband when he is abducted by her “Master,” in this series.