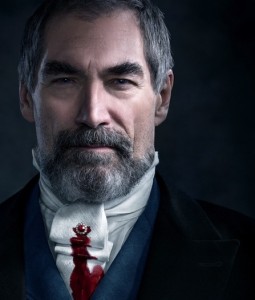 From the moment I learned that Showtime would be debuting a new 8-episode, original Gothic steampunk horror series set in Victorian London called Penny Dreadful (filmed in Ireland and co-produced by the British channel, Sky Atlantic), I knew I would have to watch it and possibly review it weekly for the site. But I was never expecting it to be as legitimately fantastic as the pilot indicates it’s going to be. Stylish? Sure. Horrific? Naturally. But honest-to-goodness excellent? And even, at times, subtle?

The majority of horror films rely–at least to some extent–on suspenseful music to provide jumps and cheap frights. The first episode of Penny Dreadful, “Night Work,” often does the opposite. During the most terrifying moments, the scoring drops away fully or falls to a hush. It understands that, in the dark where monsters lurk, prolonged silence can be much scarier, as we agonizingly wait for the claws to slash, so to speak, particularly during the final sequence–a truly masterful piece of filmmaking that moves, over its course, from horror to wonder, gradually evolving from something truly frightening into a shockingly emotional, highly charged moment, with a surprising, deeply, even tenderly homoerotic undercurrent. The scene is absolutely mesmerizing, promising a fresh take on two particular classic literary figures unlike I have ever seen them handled in the past. It is a moment of breathless anticipation, and I could not look away, both due to the direction and the performances from Alex Price and Harry Treadway.

And just as the show knows when to be quiet, it also knows when to not, in the form of absolutely exquisite dialogue that, from the mouths of such brilliant actors as Timothy Dalton and Eva Green–unlike many shows or films with this level of sometimes flashy visual style–practically demands you take notice of it. For all of its shocks, Penny Dreadful is in no rush, taking its time to lay its mythological and atmospheric groundwork–not even the entire main cast is introduced in this first hour; we’ve yet to meet either Billie Piper’s character or Reeve Carney, as Dorian Gray, among others–which, in many ways, makes it seem a spiritual successor to HBO’s ingenious fantasy cult series, Carnivale, which evoked a similarly slow-paced but creeping sense of steadily encroaching otherwordly eerieness that asserted itself more and more as the story progressed, delivering breathtaking moments of emotion and horror, creating visually magnificent scenes by turns beautiful and hideous. Also, like Carnivale, it is set in a world from the past that seems to be rotting from the inside out, the literal horror but a physical manifestation of the corruption at the heart of the very environment’s soul.

I’ve been doing my best to not reveal any spoilers, because this is a show so carefully structured, in which the various reveals unfold so deliberately, that it would be a shame to undermine a single one of them. What can I say then? It is set in London, shortly after the end of Jack the Ripper’s gruesome reign, and it is a London that is still very much terrorized and reeling from that primal horror. It may or may not feature Eva Green in two separate roles. That’s not entirely clear yet. Just one of many mysteries waiting to be solved. It cleverly brings an element of American Western steampunk into the mix, as well, in the form of Josh Hartnett’s character, Ethan Chandler, an American Wild West exhibition show performer who finds himself roped into a world of supernatural terror by Eva Green’s cold-as-ice Vanessa Ives. It features what seems to be quite a distinct take on vampires, with elements of Egyptian mythology woven in for good measure, and a very strange Tarot deck.

It is also a brilliant literary mash-up, kind of like a horror take on Once Upon a Time or League of Extraordinary Gentlemen, except–at least as of now–without the more full-on meta angles of either of those stories. While this seems to be a world in which any scifi, horror, or penny dreadful character from the late 19th century might eventually emerge–my fingers are crossed for Sweeney Todd to make an appearance at some point–these characters, unlike the former, don’t seem as if they’re going to come to realize that they’re known literary figures, and unlike the latter, are mostly still just starting to live out their classic stories rather than having already experienced them before the series began.

Also, while the otherwise great Game of Thrones has a habit of regularly showing full frontal female nudity while rarely doing the same for the opposite gender, Penny Dreadful‘s first episode refreshingly reserves all of the full frontal nudity (as far as as I can recall) for the men. The lack of heterosexual male gaze–as well as the homoerotic charge running throughout the hour–is a welcome change of pace, particularly for a Victorian series, a genre that can be prone to bodice-ripping. At least as of now, this one is not.

On paper and in its deliciously creepy trailer, Penny Dreadful seemed to be a potentially terrific idea. And if the first episode is any indication, the series is actually poised to live up to that potential, providing imaginative horror with intelligent scares. I’ll just end on this: it’s the first pilot I’ve seen in a long time that left me so entranced, I had the overwhelming urge to instantly re-watch it the moment it ended. Much like Bryan Fuller’s tremendous Hannibal, it lingers with you long after the end credits roll.

Penny Dreadful debuts this Sunday night, May 11th at 10 PM eastern on Showtime in the US.