[Note: The following review contains spoilers for all aired episodes of Once Upon a Time, up to and including “Kansas”.] 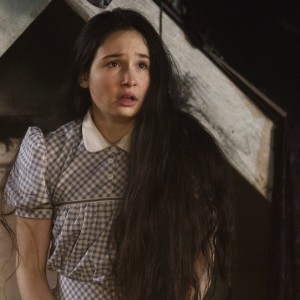 Each week lately, I emerge from the latest episode of Once Upon a Time legitimately gobsmacked and a bit bemused. Did they just–? They didn’t really actually–? Oh, but they did.

I’ve repeatedly mentioned throughout these reviews how impressed I’ve been by how quickly the recent plot twists keep coming, the show hardly ever pausing to catch its breath, and often going places one would never expect, weeks earlier than one would ever think a huge event would happen. In the previous episode, everyone got back their memories–a season-finale-level epic occurrence, if I ever I did see one–and then this week’s episode, “Kansas,” went even further, with the answers to the rest of our lingering Zelena backstory questions, the birth of Snow and Charming’s baby, and the seeming defeat of Zelena occurring with still two episodes left to go (albeit two that are going to be aired together next week, as a two-hour installment). In the latter half of its third season, Once has never felt so consistently surprising, fresh, strong, and even dangerous.

What impresses me most about all of this is how the show is managing to pay off every major thread, even the ones that seemed unlikely to happen at first glance. For example, when Zelena cursed Hook’s lips, it seemed that that was a thread that would have to not go anywhere. After all, if Emma lost her powers, our heroes would have no way to fight Zelena. After Snow went so far as to crush Charming’s heart in order to enact the Dark Curse to get back to Emma, whose white magic was the only thing that could defeat her, it seemed narratively necessary that Emma keep her powers. And yet, in this episode, bam!, that kiss does finally happen, and it happens because Zelena forces Rumple to drown Hook. Emma’s only recourse is to lock lips with him while doing CPR, because that is the kind of person she is. She won’t let him die.

How then can they ever stop Zelena? And the answer is as wonderful and surprising as it seems almost obvious in retrospect, and that is Regina. The show has very gradually been building Regina’s redemption arc for a long time, and the event that finally sealed it was her curse-breaking kiss in the previous episode. As Emma says, that was white magic. She is capable of it.  And it’s satisfying on numerous levels: because Regina has been trying to train Emma in magic while considering herself boxed in by one specific sort of magic, whereas this reveals to her that her past dark deeds don’t have to define her forever; because it allows Regina to finally emerge as the hero she had always dreamed of being; because after being soundly defeated by her sister on numerous occasions, it feels more emotionally right for her to be the one to face her; and because it completely subverts expectation.

In this episode’s flashback, Glinda tells Zelena that prophecies are tricky things and don’t always pay off the way you expect. Yes, Snow and Co. enacted the Dark Curse in order to reunite with Emma, so that she could fight Zelena and in the end, it’s Regina who does it. However, Regina couldn’t have defeated her had they not cast it. They needed to travel back to our world in order for Regina to discover her ability to use white magic. Without her reunions with Emma and Henry, subsequent emotional growth, and subsequent realization that she could wield white magic after breaking Zelena’s memory curse, she never could have subdued her sister.

And returning to my point about paying off threads that have been set in motion, Zelena’s time travel scheme was so rife with potential in theory that, at the time, it almost seemed a shame that Regina had to stop it. There was something the slightest bit disappointing about the prospect of not going through with it, even while at the same time, it was exhilarating to see Regina finally smack down her sister while forging a new path for herself, one that does not require revenge. She spares her sister’s life in order to give her another chance, her jail cell conversation with the now-powerless Zelena being a direct echo of her confrontation with Mary Margaret there all the way back in season 1, however then Regina was gloating over her petty defeat of Snow White (who didn’t even know why at the time) and here, she is openheartedly giving her sister an opportunity to redeem herself–while also being very clear, in the Regina-est way possible, that there will be dire consequences if she does not.

However, while Regina has grown, Rumple isn’t there yet, which, despite being frustrating, is completely in character for him. Although finally seeming to be open and honest with Belle, especially after she entrusts him with the Dark One blade again after all those years, he tricks her with a fake and does what he does best, which is to exact revenge. Just as when he thought Tamara had killed Neal, he is merciless in how he handles Zelena, stabbing her to death, which seems to turn her into a china statue that shatters (possibly a reference to the living china people of Oz). Much like Zelena willfully choosing her path of evil in the flashback, however, Rumple’s act of vengeance instantly begets a dark outcome, when the dust that was Zelena seems to merge with the magic in her emerald brooch and pour into her compass-shaped markings on the floor, and seemingly continue her time spell where it left off. And so, again, we get that payoff, while also being left completely in the dark for the next week, wondering what the hell this is going to mean for the future of our characters and the show.