[Note: The following review contains spoilers for all aired episodes of Once Upon a Time, up to and including “A Curious Thing”.] 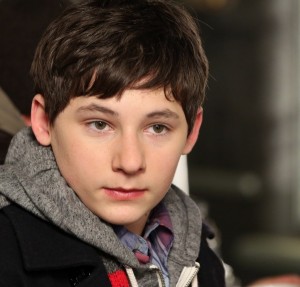 I am absolutely blown away. Ever since its first season, Once Upon a Time has consistently raised the bar of its storytelling higher and higher and yet still, to this day, manages to sometimes completely catch me off guard with its brilliance. I should expect it by now, and yet I still emerge from episodes such as this one legitimately gobsmacked, because not only is every revelation and twist in “A Curious Thing” entirely genius and surprising, but the emotional impact is even more so. It is rare to find fairy tale metaphor and character psychology merged so seamlessly, and yet Once manages to do it on a regular basis, and to, again, still exceed its own best work over and over again.

This episode unleashes a slew of definitive answers to questions we have had for the entire Oz arc to date and resolves one of its most significant dramatic points at least two weeks earlier than I had expected. If anything, I would’ve expected these sorts of reveals and reversals in the two-hour season finale the week after next, if not next season, but as in keeping with the rapid pacing of the second half of this season, in which Emma’s memory was restored far sooner than we ever might have thought possible, the show just goes for it, and brilliantly so.

And, as with the Cora flashbacks of last week, what impresses me most about the episode is how the show revisits its own past history, while reframing established iconography from earlier installments in surprising ways that add greater depth to the current proceedings. The Enchanted Forest flashback contains numerous callbacks to Once Upon a Time‘s first few episodes and the events that led to the first Dark Curse being placed in the first place. Again, Snow White is pregnant when an evil–or, in this case, wicked–witch is after her, though this time it’s specifically the baby that the villain wants. Again, Snow and Charming hold a council of their closest allies around a roundish table to discuss what can be done to subvert the spell. Again, Snow and Charming seek out Rumpelstiltskin, who is once again mad as a hatter and locked away in a cell, spouting strange prophecies. Again, moments before the curse is enacted, Charming seems to be dealt a literally fatal blow.

This time around, however, so much is different. This time, we learn in a truly ingenious reveal that the curse wasn’t cast by the witch after all but by the good guys, in order to fight Zelena–they learn from Glinda (!!) that Zelena’s dark magic can only be defeated by a powerful source of white magic, namely Emma, which explains why Regina has never been able to beat her–except for the memory-forgetting aspect, which was an intentional move by Zelena to protect herself. She may not have been able to stop the curse from happening at all, but by robbing them of their memories, she could try to ensure that they still fail to defeat her.

This is also directly wrapped up with one of the episode’s most shocking reveals: that Snow White actually crushed Charming’s heart in order to enact the curse. The show impressively refuses to break its own rules. The Dark Curse is the only option, because Regina’s spell that sent them all back to their own world definitively locked all doors between the Enchanted Forest and our realm. But the Dark Curse is also an extremely difficult one to create and cast. It took Rumple years, and then years later of training Regina. And it is a serious curse: it demands a sacrifice of the thing you love most. The episode cleverly gets around the issue of the years of necessary training by having Regina guide Snow through the writing and casting of the curse, but when it comes to the sacrifice, Regina has nothing to give up. She has lost the thing she loves most, Henry, and no longer has her father for whom he was named and whose heart she crushed the last time she cast the curse. The only people who have a strong enough love that the sacrifice will work are Snow and Charming, and although they desperately long for another way around it, Charming insists that they must protect their new child and he gives up his life to do so, telling Snow in a heartbreaking but lovely moment that he will be there with her all the way–that her love will keep him alive, as will their child.

And so the episode gives us our first instance of someone crushing a heart for a higher purpose–Snow ironically reenacting Regina’s earlier action–only to have that purpose stolen away moments later, when Zelena corrupts Regina’s spell, taunting them that when they arrive back in Storybrooke, Snow will have no memory of who she is, how to defeat her, nor what happened to Charming and will instead search for him futilely, never knowing why he disappeared. Aside from being a heartstoppingly (no pun intended) intense moment, it’s also one of the show’s best uses of its fragmented flashback structure to date, because it leaves us, in the modern day scenes, with legitimately no clue how Charming is still alive today. Is he somehow a ghost that was only temporarily resurrected by the Dark Curse or something along those lines?

The truth is so much better. Snow refuses to allow her love to have died in vain, which leads her to one of her most perceptive inspirations. Charming had said that they share one heart, and Snow begs Regina to make this literal. She asks her to take out her, Snow’s, heart and break it in two, putting one half into Snow and the other into Charming, so that they can have one shared heart, beating for the both of them. Which is such a mindblowingly perfect solution on every level, and one that is fully earned. Because the writers stuck to the letter of the law when it came to the sacrifice, it allows them a little leeway here.

Yes, on the one hand, this is breaking the rules, but on the other, it is done within the text itself, with the characters fully aware of it, and it furthermore is perfectly consistent with the series’ use of fairy tale metaphor to date. In a story where taking someone’s heart out of their chest doesn’t kill the person but rather causes them to feel less intensely (or to be controlled by the person who holds it), and where entrusting that heart to another person works as a metaphor for falling in love, it makes perfect sense that a couple with such an unbreakable bond as Snow and Charming–whose true love was strong enough to create a daughter with powerful, curse-breaking magic–could literally share a heart, like the half-heart lockets that lovers in our world sometimes share. Impossible things happen in fairy tales, and this show is wise enough to know when it can get away with it and how, here in a way that is completely consistent with its established mythology and metaphorical framework.