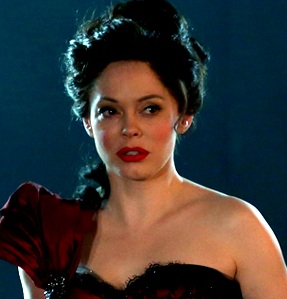 With this week’s episode, “Bleeding Through,” Once once again knocks it out of the park with an often blisteringly brilliant hour that features some of the best character development that the series has ever done, focusing on one of the series’ core relationships–namely, Snow and Regina, whose conflict was one of the key factors in setting the entire saga into motion in the first place–and moving it forwards in ways that we absolutely never could have expected all the way back in season 1, when we first met them. Hell, even last season, it would’ve seemed impossible, particularly after Snow indirectly killed Regina’s mother, Cora! The genius of this episode is that it forces both Snow and Regina to confront that event head-on and to reconcile due to a newfound understanding of both Cora and their own shared story. And their reconciliation organically springs not just from these revelations but their own history together. It’s absolutely stunning, fully in character with where they each are now, and is something that simply couldn’t have happened at any earlier point in the story but is perfectly placed here.

Firstly, however, let’s tackle Cora’s story, which is set before her previous flashback in “The Miller’s Daughter” and helps to even clarify a few points from that episode. It also creates a few potential backstory inconsistencies, but they are easily handwaveable, and ultimately inconsequential when compared to all of the great characterization, as well as clever twisting of some of the series’ core recurring themes, that occurs here. For starters, it explains where Cora got the idea to spin straw into gold in the first place–a surprisingly touching and sad reveal that also feeds exactly into the second major revelation, which is how Cora was able to shut off her feelings for Rumple and remove her heart in the first place. Cora fell in love with someone who she thought was a prince, who promised to marry her, proposing with a makeshift ring of straw that he promised to replace with one of gold when he returned. Instead, he left her pregnant and alone, and spurned her when she caught up with him, revealing himself to just be a servant of Prince Leopold.

What’s interesting here is that, yes, Cora is depicted as being opportunistic from the start. It doesn’t attempt to explain that she was actually originally a sweet, innocent girl with no ambitions of royalty until this false prince broke her heart. But, at the same time, it also makes clear that, regardless of her ulterior motives, she did love this man and felt genuinely destroyed by his betrayal. Her words to him that she will never again let another man take her heart are sad in the moment but also extremely eerie and foreboding, putting her entire history into context, because this is exactly why she will remove her heart when she worries that her feelings for Rumple might get in the way of her ambitions for herself and her daughter.  Her heart was stolen once, and she will never allow that to happen again, both literally and figuratively. Ironically, she will give up on a love–Rumple–who really can turn her straw into gold.

Shortly after, she meets the future King Leopold (also Snow White’s future father), and insinuates herself into his heart. Despite knowing that he is betrothed to Princess Eva, she attempts to manipulate the situation. She may have lost the chance at love but she is not willing to surrender her dreams of royalty. Leopold, much like many fairy tale princesses as well as Charming on this show, is not happy about having to marry someone his parents had chosen for him, and Cora, being very perceptive about peoples’ emotions, says exactly what he’d want to hear to fall in love with her, offering a very alluring alternative option–until Eva, who later overhears Cora’s false prince trying to blackmail her regarding her pregnancy (odds are she was hoping to get Leopold to marry her quickly so she could then claim that he was the father), maliciously reveals the truth to Leopold, ruining Cora’s plans. This also explains the real reason that Eva cruelly tripped Cora in “The Miller’s Daughter”. She wasn’t just being a haughty princess. They had history. She was punishing her/embarrassing her yet again for trying to steal her man.