[Note: The following review contains spoilers for all aired episodes of Once Upon a Time, up to and including “The Jolly Roger”.] 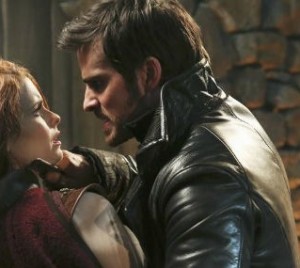 Just as with “Nasty Habits” earlier this season, “The Jolly Roger” is niftily misleading. In that earlier case, when we finally got a Rumple-interacting-with-Peter-Pan flashback, we assumed from the start that it would be the story of his first run-in with the boy and yet, as it unfolded, we discovered that the show’s devious writers had simply complicated the situation even further, continuing to tease us as to how these characters’ paths had originally crossed, in the process creating an episode that takes on new layers of meaning when rewatched with later revelations in context. And while I’m not yet sure about whether “The Jolly Roger” will have as many layers of dramatic irony later on, it plays a similar trick of toying with our expectations of what the flashback will be about. To wit: we assume that it will be the story of how Hook got back to Storybrooke with his memories intact, but in many ways, it’s actually the exact opposite. It’s a story of how Hook desperately tried to put Storybrooke behind him.

And the show accomplishes this through one of my favorite narrative devices, and one which Once always does particularly well, which is the teaming-up-of-characters-who-you-might-never-have-expected-to-do-so. Here, that’s Hook and Ariel (Joanna Garcia Swisher, returning in the role for what seems like it could be the last time, at least for now), which might seem like a strange pairing, however given that he’s children’s lit’s most famous pirate and she’s children’s lit’s most famous mermaid, it also makes a strange sort of sense. There are a lot of things I love about their pairing here. I love that Ariel’s fierceness, established in her previous outings, continues to shine through. She is determined to save her man, and she is fearless about it, even drawing a weapon on a very dangerous pirate, because she has been led to believe that he has him. Once again, we have a case in the Onceverse of the prince needing to be rescued by the princess, rather than the stereotypical fairy tale alternative.

Furthermore, I love how Ariel’s faith and optimism in true love reminds Hook of the kinder person he became thanks to his time with Emma. Which is also nicely ironic, since when it comes to the Emma/Hook relationship, she actually was never the doe-eyed, head-over-heels-in-love one. He was. The cliche would be for him to identity this woman with the woman he loved and lost, when she actually isn’t like Emma at all, at least when it comes to romantic notions. Instead, the fairy tale cliche is once more flipped. He himself is the one who identifies with her and her desire to reunite with Eric, which is simultaneously at odds with what he is currently trying to do: namely, forget his true love whose name starts with “E,” since the chances of their reuniting–as far as he knows at this point–is slim to none.

For a while, however, he tries to have it both ways. He wants to defiantly reclaim his “baddest pirate of all time” moniker even while his instincts and only-recently-newfound conscience are encouraging him to help Ariel. When it comes down to it, however, and the notorious pirate, Blackbeard (the second instance, after Mulan, of historical figures whose deeds have caused them to become legend appearing in the Enchanted Forest), who has stolen the Jolly Roger, forces Hook to decide between surrendering his ship and saving Eric’s life, Hook chooses his ship, possibly consigning his compatriot’s love to death in the process.

Which is a fascinating action, because on the one hand, yes, it’s an absolutely terrible thing to do, but on the other, we can tell that Hook does it in order to prove to himself that he can go back to being the heartless pirate he defined himself as for years, even though his heart is clearly no longer in it. It’s a posture, and even in the moment, Colin O’Donoghue makes it clear that Hook realizes he’s doing the wrong thing, but that he’s doing it because he’s trying to replace the hole in his life that was left when he lost Emma. On some level, he’s likely also thinking, “Why should I choose this woman’s happiness over my own?” But it clearly doesn’t make him happy but ashamed, and I wouldn’t be surprised if his growing dissatisfaction with the fallout of his decision is what eventually leads him back to our world to try to help Emma save her parents.

The flashback is also very cleverly interwoven with the current events in Storybrooke. With Eric gone both now and 9 months ago in the Enchanted Forest, it really does lead one to wonder whether Once had actually gone ahead and killed the Little Mermaid’s Prince. In the moment, it seems a bit unlikely. They’ve killed some minor fairy tale characters and their own created characters, but this feels a step too far. Luckily, however, the revelation that he is still alive after all doesn’t prove to be at all disappointing–not that we’d want Eric dead, but it would certainly have been bold. True, Ariel gets to have her happy ending–in fact, we learn that she actually did a while ago–but Zelena also gets another win at the same time. In the end, we learn that she’d played him all along. She had taken on Ariel’s form in all of the Storybrooke scenes (another reflection of her mother, who took on others’ forms multiple times), using Hook’s history with the mermaid in order to eventually manipulate and guilt him into swearing upon the name of his true love, Emma…which in turn allows her to place a curse on him that the next time he kisses the Savior, it will take all of her powers away.