[Note: The following review contains spoilers for all aired episodes of Once Upon a Time, up to and including “It’s Not Easy Being Green”.] 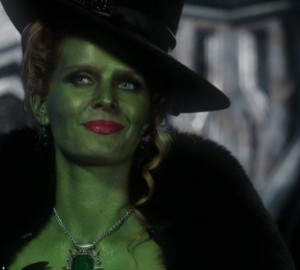 “It’s Not Easy Being Green”

By the time this Oz arc is over, I would be very surprised if it doesn’t end up being my favorite that Once Upon a Time has ever done. I have adored the show from the start, but I’m not sure if it has absolutely delighted me week after week quite to this degree before; don’t get me wrong, I loved the Neverland half-season, but Oz is one of the nearest and dearest children’s stories to my heart, and so far, they are doing so right by it, with the perfect mixture of homage to L. Frank Baum’s original writing and its most ubiquitous appearance in pop culture, the MGM film that introduced most people to the story. For example, in this episode, the design of the Emerald City and the Wizard’s throne room, complete with torches, hearkens back to the Judy Garland movie as well as Disney’s recent Oz: The Great and Powerful, but the magic slippers aren’t ruby but silver, as in the original book. They are treating the Oz mythology respectfully and playfully at the same time, striking the perfect tonal balance, and furthermore making it the heart of one of the most genuinely twisty, mysterious plotlines they have presented to date.

In addition to excellent writing, Rebecca Mader also deserves a great deal of credit for an absolutely fantastic performance. While she has been terrific in each of her appearances, this episode is where she truly sells herself as Zelena. The episode requires her to play a vast number of emotions in a single hour, from the heartbroken young woman she used to be to the current, assured, powerful, cocky Zelena she is now, with so many twists in between, from despair to hope to rage, and Mader nails every one.

As with all Once flashbacks, a great deal of information has to be conveyed in just a handful of short, economical scenes, but Mader makes Zelena’s emotions so relatable, particularly in her sadness at the hand that life dealt her seemingly over and over again, that once she reaches more grandiose, fairy-tale levels of scenery-chewing villainy, they make sense. Her terrifying anger at Regina and Rumple may eventually seem to reach into the over-the-top stratosphere, but they are completely at home in a show where that very sister she hates for having had the life she wanted (a life that Regina herself ironically would’ve given up in a heartbeat) herself spent years hell-bent on destroying a woman who had made a single mistake as a young girl. I guess they really are sisters!

When Zelena first expressed anger at Regina for being the “wanted” sister in “Witch Hunt,” I wasn’t sure if I totally bought it, but the added context that this episode provides finally brings the full picture into relief. Who mightn’t develop even the faintest whiff of rage and jealousy upon experiencing over the course of a very short period of time first the death of your beloved mother, then the heartlessly-delivered revelation from your alcoholic, emotionally abusive father that you were adopted and that he had always longed to get rid of you, and then learned that your birth mother had abandoned you in the woods, later heaping all of her dreams and ambitions on a younger sister, despite that sister being less naturally talented than you? Zelena had lived her life in poverty while Regina was in a castle, being trained by one of the greatest sorcerers the world has ever known. The grass is always greener, no pun intended. What Zelena doesn’t know is that, in actuality, their lives weren’t so dissimilar. They both grew up in homes with one monstrous parent and one loving one, the latter of whom seems to have tried to some extent to soften the psychological blows of  the former but who in each case ultimately failed to shield them effectively, leading to anguish and supervillainy.

There are also all sorts of additional ironies, of course, not the least of which is that Cora apparently didn’t see potential for greatness in Zelena when she was actually more adept at magic than Regina all along. This is also interesting, because it’s still not exactly clear when in the timeline Cora had Zelena. The Wizard tells Zelena that, from Cora’s perspective, “you couldn’t give her the one thing she truly wanted, the ability to become royalty,” whereas Regina “could do what your mother wished,” which seems to imply that Cora looked at Zelena at birth and seemed to think that she was unworthy for whatever reason, whereas Regina was, which could also imply that Zelena was the baby she was pregnant with when drawing up the contract with Rumple, and that the birth of Regina happened later. There is also the issue of Zelena being a powerful witch, which could indicate that she’s Rumple’s daughter.

For now, however, my theory is that Zelena was born before Cora met Rumple, and that he therefore is definitely not the father. Not only would this clear up the issue of parentage (it doesn’t seem that she could have lied to Rumple about the baby not being his, as I doubt she could have fooled a magical contract) but would remove the potentially too-tangled knot of the then-royal Cora somehow secretly getting rid of a baby (how? faking a miscarriage?), and the baby-naming scene in “The Miller’s Daughter” then actually being revealed to be about the result of her next pregnancy. Which also doesn’t explain why Cora would think, once she was royalty, that her first progeny wouldn’t have the ability to be royalty–because she already should be, as Regina was, albeit minor royalty at that point.

Instead, I think it’s an issue of the Wizard misleading Zelena with his phrasing in order to convince her to procure the magical item he wanted. I don’t think that Cora didn’t keep Zelena because there was something intrinsic within that baby’s aura or whatnot that screamed “no potential!” I think that she didn’t keep her because at that point in her life, Cora was a poor miller’s daughter who had dreams of climbing the social ladder but was convinced that wouldn’t be possible with a baby to feed and raise. From her perspective, being a mother would have held her back at that point in her life. No king would ever marry a poor woman with a baby, which also would’ve added the additional burden of needing food she couldn’t afford. Once Regina was born, however, Cora was already married to Henry, and a strong sorceress in her own right, and that’s why Regina “could do what [she] wished”–not due to preference but circumstance. And until the show proves me wrong, that is the assumption I’ll be going on.