[Note: The following review contains spoilers for all aired episodes of Once Upon a Time, up to and including “Quiet Minds”.] 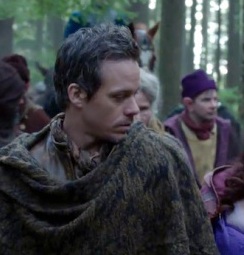 On its surface, Once Upon a Time can be such an effervescently fun, wonderfully magical show that it can sometimes be easy to forget its ability to pack an enormously emotional wallop when it wants to, even given that it only just did so a few episodes back, with the mid-season finale.  However, in that situation, the destruction of Storybrooke/rewriting of Emma and Henry’s memories was clearly something that was going to be reversed somehow eventually–or at least the latter half was–particularly after the coda. Even the last image we had of Rumple, while it seemed like a death, wasn’t necessarily a permanent one, given that we saw no bodies, which is practically fantasy TV shorthand for “I’ll be back”; also, it occurred at the hands of an enchanted dagger, and he (along with his father) vanished into a bright light, which hinted at the possibility that there might be a storytelling way out of it. Which there was. I just never would have guessed exactly how high the price of that resurrection would be.

Here’s the thing about Once Upon a Time: although, as on many fantasy shows, dead doesn’t always necessarily mean dead–they were able to restore the Blue Fairy’s life, because her “death” was caused by her shadow being removed, so getting it back brings her back; Blue was able to save August’s life at the last moment because she simply reinstated the exact same spell that originally brought him to life, albeit it with a significant price–in any case where it doesn’t, there has always been a last-minute magical intervention or a loophole that differentiates it. However, whenever someone has passed the point of no return and we have seen their lifeless body on screen–examples including Sheriff Graham, Snow’s mother and father, Johanna, Billy, Cora, Peter–they have remained dead. It’s hugely important to the series’ dramatic impact that, although this may be a fairy tale show, it takes death very seriously, honoring the extremely dark roots of the original, grisliest versions of these stories.

If one were to have any question as to whether the death in “Quiet Minds” is permanent or not, one only need look at Once‘s companion series, Once Upon a Time in Wonderland, in which a major part of the arc has revolved around the fact that, in order to bring someone back from the dead, the very laws of magic would have to be rewritten. Furthermore, the only examples on this series in which someone did “successfully” resurrect someone were both done by Dr. Whale/Frankenstein, and in both cases, he brought back an unnatural, tortured revenant of the person each was in life. In the latter case, Regina had to see past her own selfish desire to have her true love, Daniel, back in any form, ultimately destroying him in order to free his soul and put him to rest.

And, so yes, in all likelihood–and as both the writers and his actor, Michael Raymond-James have confirmed–Neal is well and truly gone. You can even sense it in the emotional anguish that Emma and the others experience in the final act. Once has never featured an extended grieving sequence for a character whose death it planned on reversing, and the last time the cast has been rocked so hard by a loss, it was Sheriff Graham in Season 1, a crucial storytelling move at the time that definitively indicated that Regina wasn’t playing around–she was, indeed, at that point, the Evil Queen–and that the stakes were extremely, life-and-death high. Neal’s death serves a similar purpose here, creating yet another in a series of deliberate echoes of the first season that have run throughout this new set of episodes. It establishes not only what a truly formidable and ruthless foe the Wicked Witch is, but also creates an even stronger motivation for the rest of the characters to fight tooth and nail to defeat her.

Although I do like him, Neal has never been my favorite character, however he has always been arguably the most important in the series, at least as far as the grand arc is concerned, because it was Rumple’s initial loss of him that set the entire saga in motion. Rumple moved heaven and earth, selfishly consigning countless numbers of people to years of misery, in an effort to reunite with his son. He would do anything for him, and now his Baelfire is forever gone, due to Zelena’s heartless actions.

Meanwhile, for Emma, Neal has been up to this point the love of her life, and despite the hardships, betrayals, and complications they went through, and even though she wasn’t yet emotionally ready to accept him back with open arms, she always seemed to have in the back of her mind the idea that one day, she would return to him. And although Henry may not remember him now, he loved his dad very much, and when those memories do return, it will be heartbreaking for him. And that sadness ripples outwards, for Snow and Charming are heartbroken for their daughter and will do anything to avenge the loss she suffered, and others will do anything for them; Belle is heartbroken for Rumple and for the loss of her friend; Hook also has his own personal reasons for mourning Neal, due to their background, which was finally brought up again in a truly lovely scene that, in retrospect, finally resolved a crucial aspect of their relationship that had been on the back-burner for most of their interactions up to this point–the fact that, for a brief time, Hook was his titular adoptive father (in addition to actually sort of being his stepfather, at least in spirit).